After a scrappy opening, Ventnor began to dominate possession and territory. The forwards drove the Fawley scrum backwards time and again, with the backs making inroads into the Fawley defence, but Ventnor failed to convert their constant pressure into points by taking the wrong options when the Fawley try line came into sight.

From a rare excursion into the Ventnor half, Fawley were awarded a penalty, which they converted. Ben Cooper replied almost immediately with a penalty for Ventnor to make the score 3 apiece.

Again Ventnor camped in the Fawley half and with 10 minutes of the first half remaining, just as it looked like Ventnor were about to score their first try, the Fawley full back intercepted a stray pass and ran the length of the field to score an unconverted try against the run of play to give Fawley a 8 – 3 lead. Ventnor surged forward from the kick off and regained possession. After a flowing move, involving most of the team, Ross Harris raced away to score in the corner, with Ben Cooper converting from a very difficult angle, to give Ventnor a 10 – 8 half time lead.

The second half continued in the same vein as the first, with Ventnor constantly on the attack. After more impressive work from Penner and Riches, Ollie Davis crashed over from close range, which Ben Cooper converted.

Fawley then attempted to use roughhouse tactics for the rest of the match, which led to several scuffles. Ventnor stood firm and completed victory with AJ Wells man of the match, Paul Berry darting over for Ventnor’s third try, again converted by the ever reliable Cooper. Fawley scored a penalty right at the death to make the final score 24 – 11. Ventnor entertain top of the table Overton at Watcombe bottom next Saturday, 3pm start.

Ventnor played host to Solent Nomads last Saturday (17 Nov), getting off to a flying start when a sliced kick from Ben Cooper was missed by the Nomads full back and Jake Babington pounced to give Ventnor a 7-nil lead within the first 3 minutes. Ventnor, boosted by this gift, then toyed with the opposition’s…

Woking 1ST XV 80-5 Ventnor 1ST XV  Ventnor travelled away for a RFU Junior Vase game and suffered a defeat this week away to Woking. The island side had to travel with a bare 15 due to injuries and work commitments. As well as managing to field another side at home against Isle of Wight… 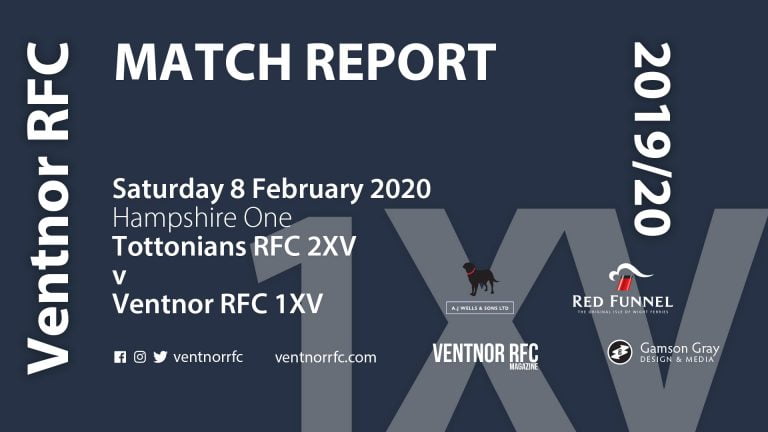 When Tottonians RFC 2nds visited Ventnor RFC in late September last year, two of their players left the ground in ambulances – Harry Morse with a neck injury and Todd Arnison with a leg break. Tending them both during the wait for the ambulances was Zoe Jones an experienced sports therapist from Newport who ensured…