Ventnor’s second team travelled to Wootton Rec last weekend (26th) to play local rivals Isle of Wight II in a league derby match. Ventnor struggled to get to grips with the confident opposition in the first half, but staged a gritty second-half comeback to come close to stealing the win.

Always a tense encounter, Ventnor were hoping to continue their run of form against IW but could not seem to organise their defence from the kickoff. IW capitalised on this by a try in the corner from Frost-Jones in the ninth minute. A disorganised defence and lack of communication plagued Ventnor in the first half, and IW were happy to make Ventnor suffer with two scores from Tony Lillington in open play. A miserable half for Ventnor was concluded with IW’s Warvill scoring from a tap-penalty after Ventnor were penalised under the posts. At the break IW led 24-0.

The second half did not begin well for Ventnor, conceding an early try by IW replacement James Curran. Facing an almost insurmountable scoreline, Ventnor regrouped and were determined to salvage some pride from the encounter.

Aiming to put right their mistakes of the first half, Ventnor obtained possession and ran at the IW line with renewed intensity. This aggressive play was soon rewarded with a try from Dean Magnusson, with Warren Riches converting.

Ventnor continued to take the game to the opposition, seeming to be a different side to that of the first half. On the back foot, IW began to lose the contest at the breakdown, and the Ventnor scrum steamrollered IW off their own ball in the Wootton mud to keep Ventnor in the ascendancy.

This change in momentum allowed Wightlink man of the match Fred Newman to run two tries past a reeling IW, and this on his debut for the club!

The game continued in true ill-tempered local derby fashion, with both Ventnor and IW losing a player to the sin bin after they clashed in front of the referee. IW found themselves another man down after being pinged for foul play off the ball.

Ventnor hoped to continue the reversal in fortunes, fancying that an upset was in sight with ten minutes remaining and two scores necessary to put them ahead.

IW put everything they had into slowing down play and denying Ventnor this opportunity. Ventnor’s forwards, dominant throughout the half, were denied the chance to continue their effective scrummaging work when IW injuries led uncontested scrums to be required.

Referee decisions were not kind to Ventnor and IW were able to score against the run of play following a quick penalty late in the game.

Local derby handbags made an appearance before the final whistle, with both squads frayed tempers’ boiling over and fists flying. In true rugby spirit, once the final whistle was blown both sides shook hands, cheered one another and retired to the clubhouse.

Match report Fareham Heathens 1st XV v Ventnor 1st XV 21/10/2017 Match report by Ben Savill Ventnor travelled away again this week for a highly anticipated clash with 6th in the table Fareham Heathens RFC. Looking for their first win of the season and with the force of ‘Storm Brian’ in full effect it looked…

Player Profile: Sam Lines Sam is currently the only VRFC player who has managed to grow a full beard during a game. And the only rugby player to do a degree in Wales and not play rugby at any point! Age: 21 Position: 10,11,12,13,14,15 (another greedy back) Time at Club: 4 Years What do you…

Ventnor seconds played Portsmouth 4 in this tough merit table clash. The game was typically physical with both sides putting in big hits. Ventnor welcomed back from injury Winter, Newbury, Cripps and Rogers who all put in a massive shift. The first half ended 0-0 and the second half was where Ventnor began to dominate… 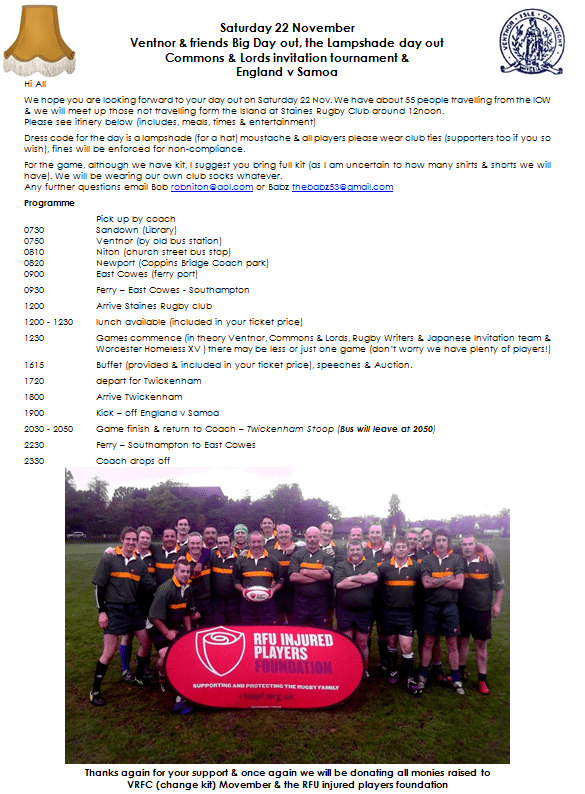