With the team changing on the bus due to time restraints, Ventnor were keen to play for the second week in a row which is quite unusual given recent weather conditions. The game started with a high tempo that Ventnor were not expecting from bottom of the league Alresford. The first try not coming until the 20th minute with Tobias Penner diving over the line with an outstretched arm on the end of some flowing passing. After that Ventnor realised the key to this game was quick recycling to hamper the relatively unfit opponents defence. Jake Babington scored the second try, that was possibly the pick of the bunch as it involved some sublime passing followed by Penner touching down for his second and the games third try.

The second half went more Ventnors way as Shaun Williams, playing out of position on the wing ended a fine passage of open play. Ventnors scrum was totally dominant and was winning against the head on almost every occasion. This was made particularly apparent as Ventnor turned over a scrum on the 5 metre line and then walked it over the try line for James Morley to have his try from under Wightlink Man of the Match Todd Riches nose.

Alresford then managed to score a try with their only venture into Ventnors 22 following a driving maul off of a lineout.

Moments later Damien Marriot then ran through the defensive line to touch down and over the course of the match converted 2 tries as well.

Paul Berry then came on to make his comeback from serving in the Navy. He scored within 5 minutes of coming on only then, just after the restart, to be sin binned for the remainder of the match for a dangerous tackle.

All in all Ventnor were pleased with their performance and look forward to another game next week.

Wightlink Men of the Match: Aaron Marriott and Todd Riches

DEAR ALL THIS IS AN IMPORTANT TIME OF YEAR FOR THE CLUB THE REVIEW OF SPONSORS FOR NEXT SEASON IS STARTED ITS A TOP LINE MATTER, SPONSORS VERY MUCH HELP SUSTAIN OUR CLUB IF YOU@VE ANY IDEAS PLEASE CONTACT ROG rogerevans515@btinternet.com THANK YOU

Ventnor secured their second place with a superb performance against Overton. The last game between the two sides saw Ventnor just win it 30-29, so coming into this game they knew they had to perform well. Ventnor thought they had scored early when Ed Blake crashed over in the corner only for the referee to…

Ventnor RFC enjoyed a 40th birthday last Saturday since being reformed in 1974. Guests, Trustees and Vice Presidents of all ages come together once again to hear speakers and toast the success of the Club. The celebration was led by John Metcalfe, John Whitehouse and Stuart Babington. Adam Pratt was Master of Ceremonies. The Ladies… 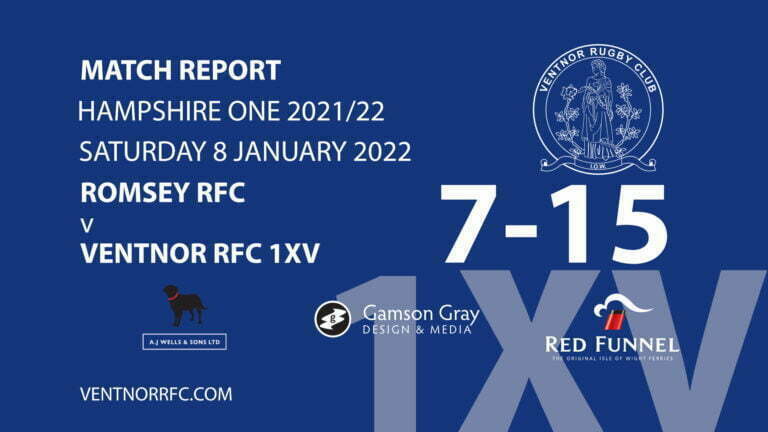 Romsey RFC 7-15 Ventnor RFC 1XV 8 January 2022 Despite the appalling conditions and a pitch that cut up badly, this was an excellent match played with great spirit and energy by both teams. Romsey RFC established their game plan early on with their pick and drive tactics working well for them despite some excellent…