Ventnor’s penultimate home game was the biggest game of the year for them against a nye-on unbeaten Petersfield.

The team returned to full strength, with players like Todd Riches, Chris Dobbas, and Sam Pickard returning from other priorities. There was a big crowd at Watcombe Bottom and Ventnor were keen to show them why they were right to spend their Saturday afternoon watching them play in the glorious sunshine.

The game kicked off and it was clear to see both sides were in a winning mindset, with both sides defending and attacking with real gusto. The first chance at some points fell to Petersfield who had a penalty in the 25th minute in a position that looked a simple kick. However, it is not easy to score points against Ventnor at Watcombe Bottom, with only 4 teams managing to score any points at all all season. The kicker pulled his kick and it hit the post. Ventnor then kicked it to the other end and camped in the oppositions 22. This lead to a scrum for Petersfield on their 5 metre line which was spun round and in the confusion Wightlink Man of the Match Harrison Marsh picked up the ball and dived over the line. Marriott converted for a well deserved lead.

This fired Ventnor up even more and they played some of the best defensive rugby they have played for a long time against what is probably the best attacking team the Hampshire 2 league has. The constant pressure did eventually drive Ventnor back and this lead to a penalty for Petersfield, who scarred from their last kick, elected to kick for touch. The resulting line out wasn’t straight and Ventnor won the right to have a scrum. The hook from Lewis Jones put the ball straight through the scrum and out the back where winger Shaun Williams dived on it just in front of the try line. Unfortunately the Petersfield flanker had seen this and stole the ball off him and just about found the try line for 5 points. It was converted on the stroke of half time for an even contest in the second half.

Ventnor now had a massive talk from captain Danny Newbery and continued their fighting spirit into the second half. Ventnor werent going to be happy without a win. The game was hard and fast, both teams suffered heavy injuries. The first to fall for Ventnor was Tommy Englegardt who was replace by Ryan Cooper at full back. This was followed by Newbery injuring his knee and with no props on the bench Marsh went to prop with James Pemberton coming on at flanker. Soon after this Marriott took a knock to the head and it looked like he too would have to come off but he stayed on to battle on for the win.

Then came the pivotal moment in the game as Petersfield flung it out wide to their overlap and their winger dived for the line with an outstretched arm to hit the try line. Disaster for Ventnor, who would only have 3 minutes left to rectify the situation.

Unfortunately time ran out and the whistle blew. This game in a sense summarised Ventnor’s season – giving the big boys tough games but lacking the result in the end. With this loss, Ventnor now can’t gain promotion with 2 games remaining. There were a lot of positives that came out of the game though. It was a testament to how far the team has come in the last 2 years and it signals a bright future as the youngsters come up through the squad.

A strong Ventnor team knew the importance of this fixture against one of the top teams in the division and started with an urgency and drive that put them straight on the front foot. Quick thinking from the back of a ruck saw Ryan Cooper take advantage of sloppy defending to score an early first try which Warren Riches duly converted.

Excellent support work and strong defensive work by Ventnor in the first twenty minutes was undone by a lapse in concentration which let the well-drilled Petersfield team back into the game. Good play by the visiting team gave Petersfield a 12 – 7 lead.

Urged on by the watching crowd, Ventnor surged forward after a second try. Silas Gregory went very close from the back or a stolen lineout but was held up inches short.

Finally some powerful play and some slick passing allowed Kyle Draper to crash over for the equalising try. The conversion was missed and the tension in the final few minutes was palpable as Kyle Draper, with the very last play of the game, broke through tackles before being pushed into touch with a last-gasp tackle with the tryline less than a metre away.

As the referee blew the final whistle both teams can be happy with a terrific game of rugby. Ventnor probably just shaded the game on chances and were perhaps a little unlucky not to win but a draw against a very strong team was a great result and keeps Ventnor in with a chance of promotion. 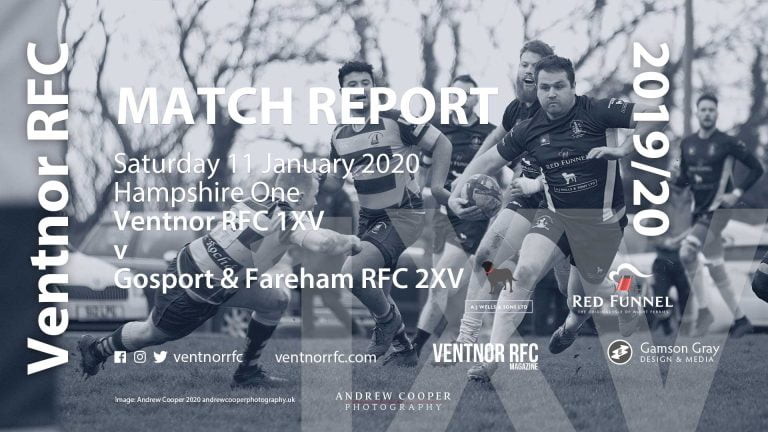 Ventnor Mighty Lions played Sandown and Shanklin Hurricanes 2nd team this past Saturday on a wet and muddy Watcombe Bottom. This was a much anticipated local derby as the two teams haven’t been in the same league for a couple of years and the last time they met was back in 2013. It also featured…

Woking 1ST XV 80-5 Ventnor 1ST XV  Ventnor travelled away for a RFU Junior Vase game and suffered a defeat this week away to Woking. The island side had to travel with a bare 15 due to injuries and work commitments. As well as managing to field another side at home against Isle of Wight…