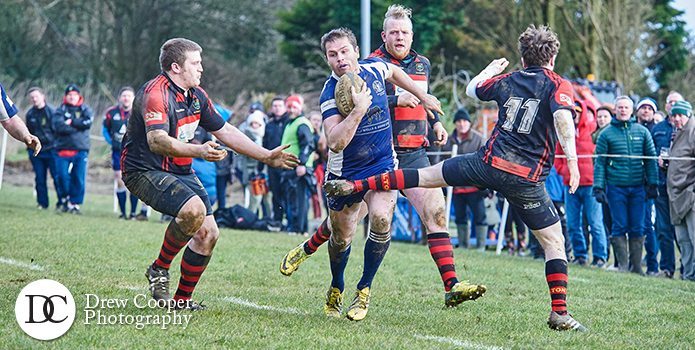 Ventnor’s last home game of the season, probably didn’t start as well as the big home support would have liked with the wind blowing across the pitch and hailstones beating down. With the home side giving away a lot of penalties Alton RFC were able to gain a lot of territory but couldn’t turn it into points because the Ventnor lineout was solid and disrupted Alton’s chances.

It took the home side a good 30 minutes for the home side to break Alton down with a penalty from Fergus Kenny and a try from Todd Riches, Ferg Kenny converted. One of Ventnor’s subs was needed Marc Wilkinson got injured kicking so Dave Balls apprentice Damian Marriott stepped up from full back to scrum half for the rest of the game and Chris Dobbas came on. The second half Ventnor came at Alton with some good hands and good kicking to gain territory from the new pairing of Kenny and Marriott.

With backs and forwards linking well with Sam lines scoring, conversion missed. With more dominance from the forwards at the scrum it led to Andy Gough scoring two tries. The conversion was missed. With the bonus point secured it led to other subs Ventnor’s talisman Danny Newbery making way for Sam Dawson and the flying vet Dean Magnurson coming off for Aarron Newman.

It wasn’t just Ventnor with attacking rugby Alton broke the line on several attempts but the Ventnor defence held strong with hard hits from all. With about five minutes left both teams were getting frustrated with the ref on his decision making. And this led to Ventnor playing with a man short due to William Babington getting another yellow card to his name.

The win guaranteed Ventnor second place in Hampshire Division 2 which should see them gain promotion. A bonus point win against bottom club Kingsclere on 19th March will set up a title decider away to Romsey in the last game of the season on 2nd April.