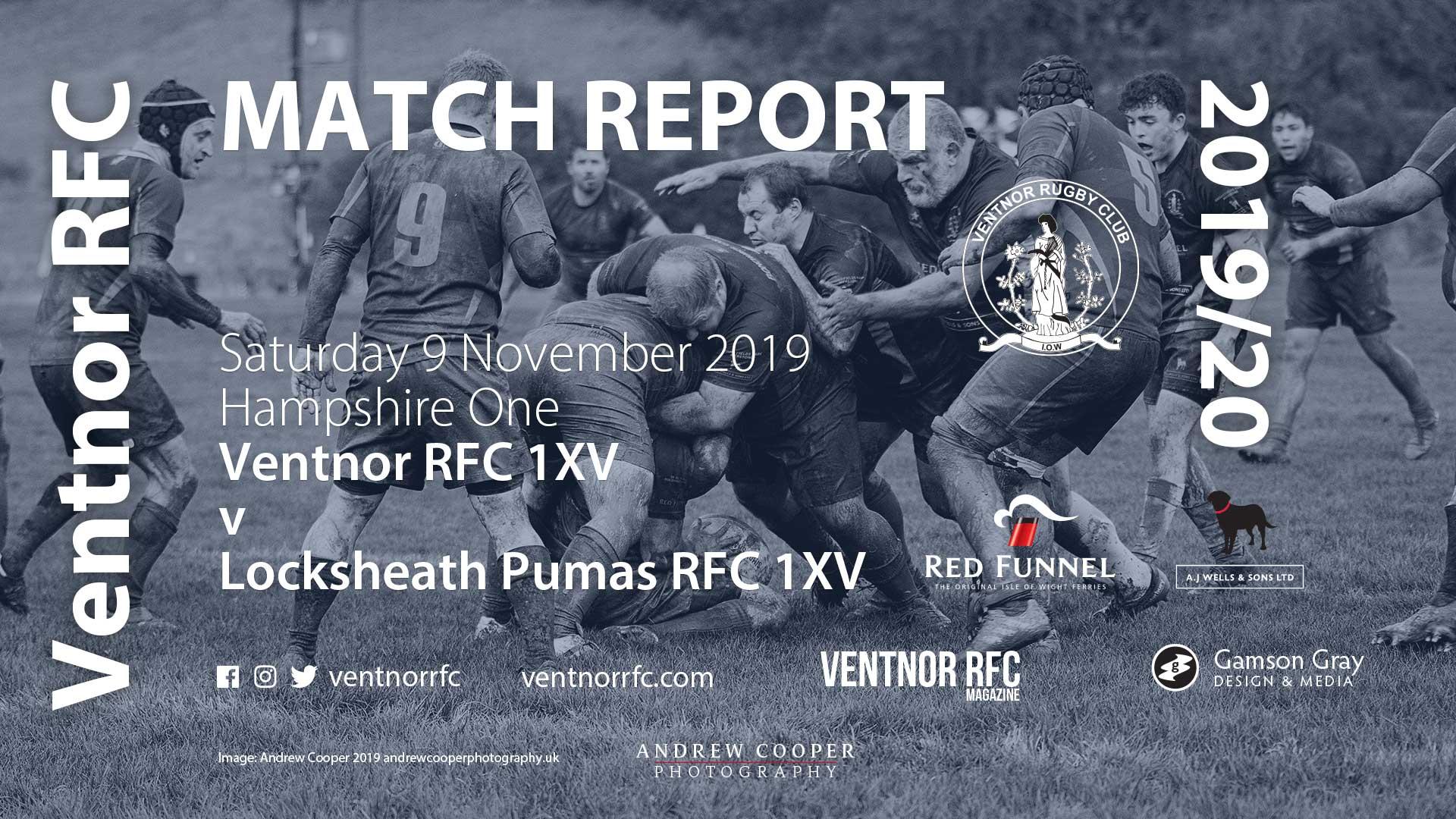 The match kicked off in driving rain (a reminder of the conditions when Ventnor travelled to Locksheath last year) and immediately the home team found themselves on the back foot as the Pumas drove close to the ruck and it took some pretty heroic defence to keep them out.

Three times Ventnor got in over the ball and won penalties to clear their lines but the visitors took advantage of minor mistakes to come back until their scrum-half darted over for an early try.

Undaunted, Ventnor came straight back as the indomitable Marsh disrupted the Pumas possession and Louis Malkin’s lightning passes instigated waves of attacks with Ed Blake, Sam Lines and Harry Colson prominent. Adam Pratt, Lewis Jones and Tristan Price gave the Islanders an edge in the scrums – supported by the massive effort of Andrew Teague and Dan Noyes – and the continuous pressure resulted in a penalty that Calvin Edwards converted.

Ventnor kept up their work-rate as Dominic Marsh and Teague, after a shaky start, ruled the airways at the lineout while Jones, Colson and Pratt barrelled into the opposition with relish. Considering the conditions, the quality of the rugby was exceptional and the game benefited from an excellent referee who allowed a high tempo to be maintained despite the Pumas habit of delaying every line-out – much to the bemused exasperation of Ventnor skipper Lewis Jones.

When on occasion, the Pumas did break out, the defence of the entire Ventnor team was solid highlighted by Marsh executing an extraordinary ankle-tap that stopped one certain try while full-back Justinas Urbanos produced a magnificent last-ditch tackle that prevented another. Edwards probably led the tackling statistics but not even he could prevent a Pumas try late in the half when an uncharacteristic mistake from the fringe defence allowed the winger to score in the corner. Thus the half ended with Ventnor 10 – 3 down but well in the game.

Hence the early part of the second half was very disappointing as the Islanders let in three sloppy tries as injuries led to disruptions in their defensive pattern and the Pumas upped their efforts. The weather had abated and, perhaps, it might have been an opportunity to stretch the visitors’ wide defence but Lines and Edwards kept the ball close to the pack in attack and the potential of Max Wheeler, George Finan and Ed Blake was largely left untapped. Chris Fletcher came on for Price and put himself about in attack and defence while the very promising Oscar Fitzgerald made his debut and looked straight at home as Ventnor came back into the game with a series of sustained attacks.

Drives by Savill, Jones and Pratt provided quick ball for Malkin and a brilliant flick pass from Edwards gave George Finan enough room to burst over in the corner. This was Edwards’ final contribution as he made way for the ever-youthful Warren Riches who has never let Ventnor down. Despite further endeavour, the game ended with the visitors back on top and they completed the scoring with a final try as the whistle blew for full time, leaving the score at Ventnor 8 – 36 Locksheath Pumas.

It was a great match to watch for the very damp crowd with quality skills apparent from both sides who played a full-blooded game in excellent spirit.

A J Wells Man of the Match: Chris Fletcher for his display that defied his fifty-one years.

Red Funnel Moment of the Match: George Finan for arriving late and yet being Ventnor’s only try scorer.