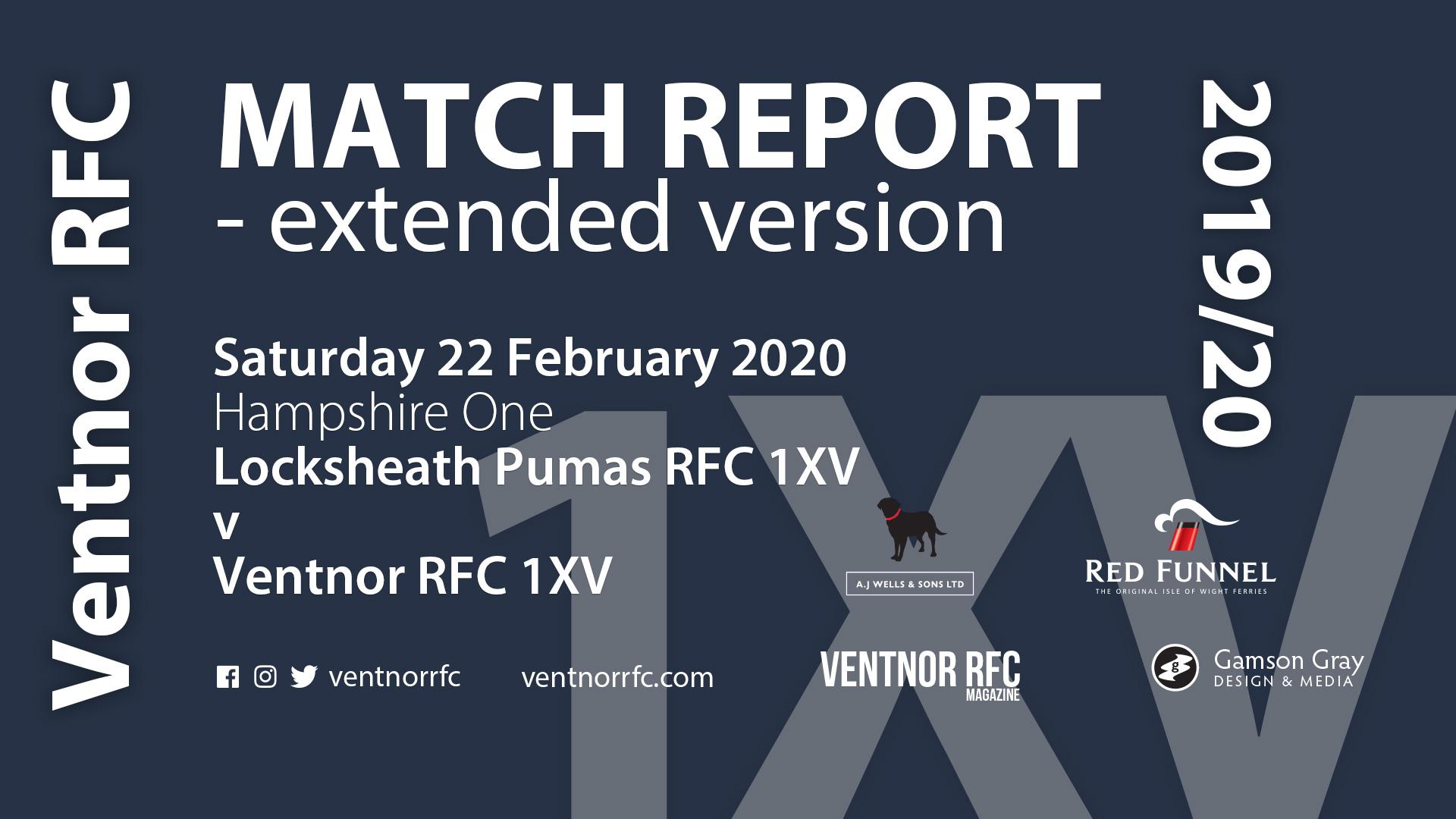 When Locksheath scored within a couple of minutes of the kick-off, there was concern that this could be a long afternoon for Ventnor. But not a bit of it!

Playing with the wind, the islanders went straight back onto the front foot, taking the game to the opposition in a manner that had coach Chris Fletcher purring. Travelling with a preponderance of forwards, Andy Teague (normally a second row) took up position on the blindside wing whenever there was an attacking scrum only to join the forward pack in the loose.

On the opposition ball, Teaguey joined the back row and Chris Hill took up position in the ten channel.  Many a Pumas attack foundered in a tangle when they chose that route! It was tactically very shrewd.

However it meant that Ventnor played with three outside backs throughout and so they concentrated on bringing the ball back to where the support was thickest. Ben Savill and Harry Colson set the tone with massive support of the ball carrier providing real continuity. And it was great to see James Greener starting his first game for the over a year after a brief – but effective cameo against Portsmouth. It was to his tremendous credit that he was able to contribute for the full eighty minutes.

Good things were happening all over the pitch. Dean Magnurson was doing endless damage to the attacking options of the Pumas, performing those unseen bits of villainy on the floor (learned over the last fifty years of playing for VRFC!) and slowing down potential dangerous ball. Tristan Price smashed a solo counter ruck that literally shook the ground.

Skipper Lewis Jones was taking the ball up, straight up the middle, with the whole Ventnor pack in his wake. Something had to give. The first chance was a penalty that Ed Blake just missed – unsurprisingly in the conditions. But then Jewy Jones bashed another hole. Colson, George Finan and Blake carried it to the shadow of the posts. The ruck was won and Louis Malkin fed Calvin Edwards whose short pass allowed Ian Lane to force his way over despite the attention of three defenders. Blake converted and Ventnor reached halftime 7 – 5 to the good.

With the wind behind them the Pumas started the second half strongly and only an exceptional tackle by the evergreen Warren Riches prevented a score after a kick chase. However the subsequent scrum led to a push-over score (despite the suspicion of a knock-on) and the home team were back in the lead.

Ventnor came back strongly when the dynamic Hill picked up at the back of a scrum on halfway.  The ball went wide, Blake brought it back against the grain and Finan straightened the line.  Jewy secured the ball and from the ruck, scrum-half Louis Malkin spotted a gap and burst through, stepping the full back to touch down. A brilliant try.

The Rev Riches completed the conversion and Ventnor were back in the lead. Playing all the rugby, inspired by the relentless energy of Teague, Savill and Hill, Ventnor almost scored again when Jones went on another burst forty yards out.

To his horror, he went through the defence and was faced with a thirty yard sprint. Somewhere on that never-ending journey, an invisible grizzly bear appeared to leap on his back so that he was caught a yard out and his intended offload ended up in Puma hands.

At the other end, Jake Babington pulled off another try-saving tackle but, soon afterwards, the Pumas caught a break when the ball went loose and their flanker chased a kick-ahead and touched down to retake the lead. It was obvious that a few Ventnor players were carrying knocks.

For instance, Ed Blake was almost out on his feet with the after effects of flu but bravely continued to take the battle to the Pumas. The excellent Dan Noyes came on for Lane (who had just returned from injury) but Ventnor’s lack of further replacements probably decided the match as injuries took their toll and the Pumas scored in the last movement of the game to rob the islanders of a hugely-deserved bonus point.

A J Wells Man of the Match: Chris Hill – awarded by the Pumas’ captain) for his energy in attack and defence.

Red Funnel Moment of the Match: Calvin Edwards – (awarded by skipper Jewy Jones) for his extra-curricular activities and his miraculous recovery.