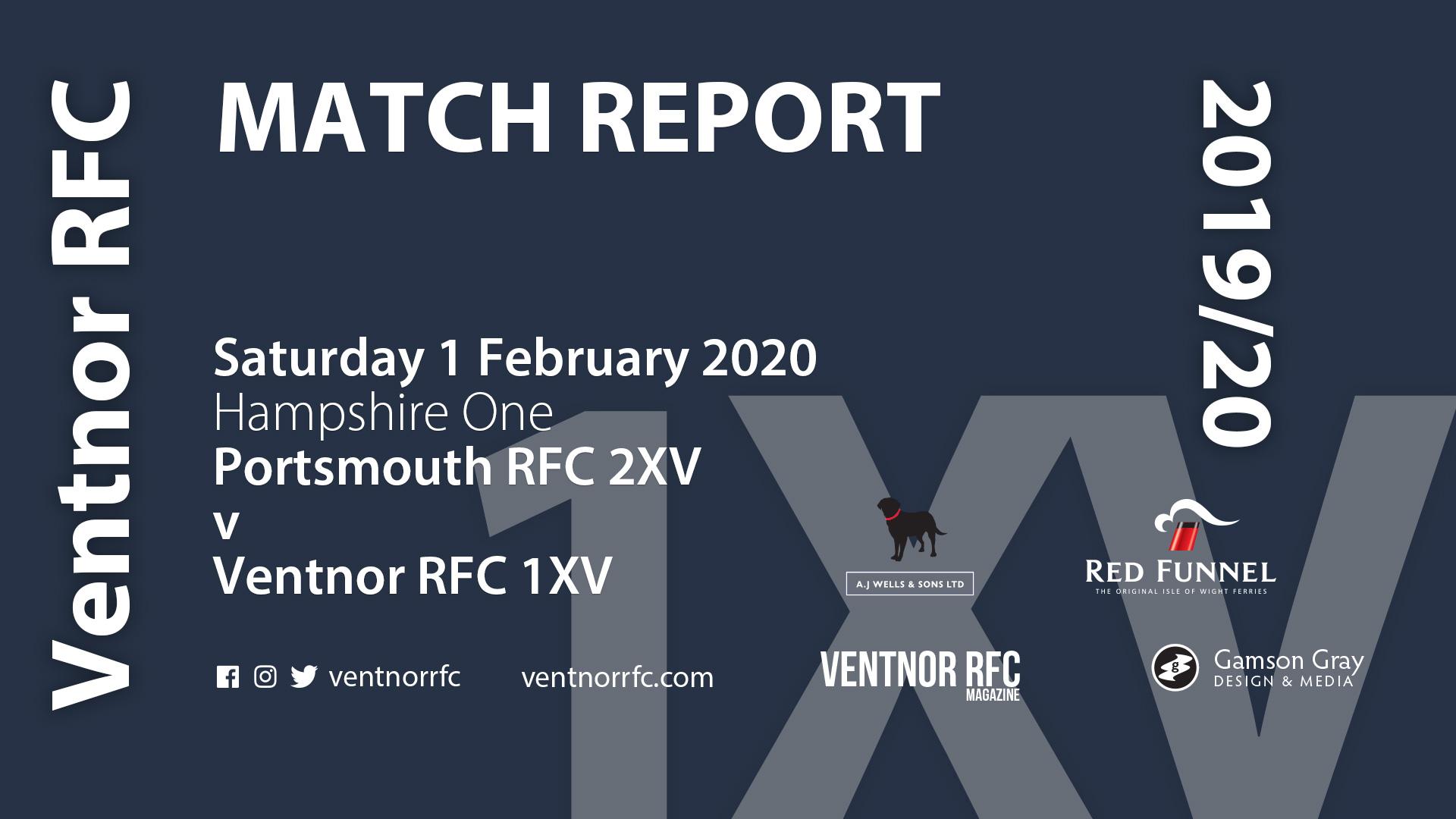 Playing against a stiff breeze, Ventnor started strongly and were unlucky that, after a sustained attack, the final ball from Sam Lines to Alex Enache just went to ground with the line begging.

However Portsmouth soon set out their tactical plan, playing ten-man rugby and kicking deep. (Meanwhile one can only imagine that their outside backs had to resort to counting trains from the nearby Hilsea station just to keep themselves awake!).

To their credit, Ventnor’s back three of Justinas Urbanos, Ed Blake and Enache dealt with the high ball well but, when the vicissitudes of the wind caught them out, Ventnor were immediately under pressure. Early on, from a line out, Portsmouth scored their first try with a perfect driving maul.

The Islanders quickly learned that they had to fell the catcher before the maul could be formed and – with Cameron Griggs and Ben Savill prominent – were not caught out again. Indeed Ventnor were playing all the rugby in the first half but beginning to lose the game as the home team scored three more tries (two converted) by bashing up the middle and sending runners up the flyhalf channel.

In retrospect, Ventnor may have done better to have closed ranks and concentrated on stopping the big carriers at the gainline and containing the score until the halftime break. That said, Ventnor had one really bright spot.

Jake Babington, on his own line punted out of defence. With the ball held up in the wind, Babington was able to smash the catcher and Cameron Griggs was over the ball in a flash and the penalty was won. Blake, seeing broken field ahead of him, took the quick tap and – with his combination of power and pace – broke through. With one man to beat, he flicked out a pass to the speeding Enache and the winger powered over. At halftime, the score was 24 – 5 but the game was still wide open.

Portsmouth didn’t score another point but, frustratingly, Ventnor were not able to capitalise on their second half dominance. It must be said that the Islanders were not getting the rub of the green.

Several ‘seat-belt’ tackles were ignored, Portsmouth players were flopping over the ball or crawling around in rucks to salvage lost ball and – most significantly – negating Ventnor’s massive advantage at scrumtime. Tighthead Adam Pratt was giving his opposition a terrible time so that Portsmouth reverted to slewing the scrum through ninety degrees meaning that Chris Hill and Louis Malkin were not getting clean ball and Sam Lines was cramped for time and space. This was allowed to go on until finally – with a couple of minutes remaining – the referee pinged them (rather too late for the satisfaction of the travelling support).

In addition, Ventnor’s lineout was failing, the wind proving troublesome to both hookers. Skipper Lewis Jones was probably the worse offender but he more than made up for it with his tenacious tackling and demented bowling-ball drives. Max Wheeler was also prominent in defence and attack and, with Harry Colson, gave Ventnor’s backrow a powerful presence.

After his man of the match performance the previous week, Wheeler was enjoying himself among the forwards, but a hip injury forced him off and Ventnor welcomed back Paul Berry. Portsmouth then attracted a yellow card when one of their players took offence to a drive from Hill (one can understand any opposition’s frustration when playing against Chris Hill). It must feel like there is here of him since he is always there – like some ubiquitous, perpetual-motion Legolas look-alike – and obviously enjoying every moment of the contest!).

Another welcome returnee for Ventnor was James Green who came on for Ian Lane who had bravely carried a knock throughout. After a long absence due to injury, Green has been patiently strung back together by Ryde sports therapist Dan Noyes and he was soon in the thick of it. In a rare sustained attack on Ventnor’s line, it was often the powerful second-row who was the rock against which the Portsmouth attacks foundered.

With time running out, Ventnor scored their second try when Blake cut a diagonal line, Calvin Edwards straightened the attack and Berry set up the ruck. Quick ball from Malkin gave Edwards the chance to put the rangy Babington over in the corner. Great stuff.

Ventnor kept up the pressure, desperate to score the converted try that would have given them a losing bonus point but – having won the second half – the final whistle went with the score of 24 – 10.

A J Wells Man of the Match: Alex Enache – for his all court game and his great try. To celebrate, he provided a great rendition of a Romanian folk-song on the coach-trip home (a lament to Brexit perhaps?). It was hardly Twist and Shout but deservedly received the biggest applause of the journey!

Red Funnel Moment of the Match: James Green – for a great return to action.