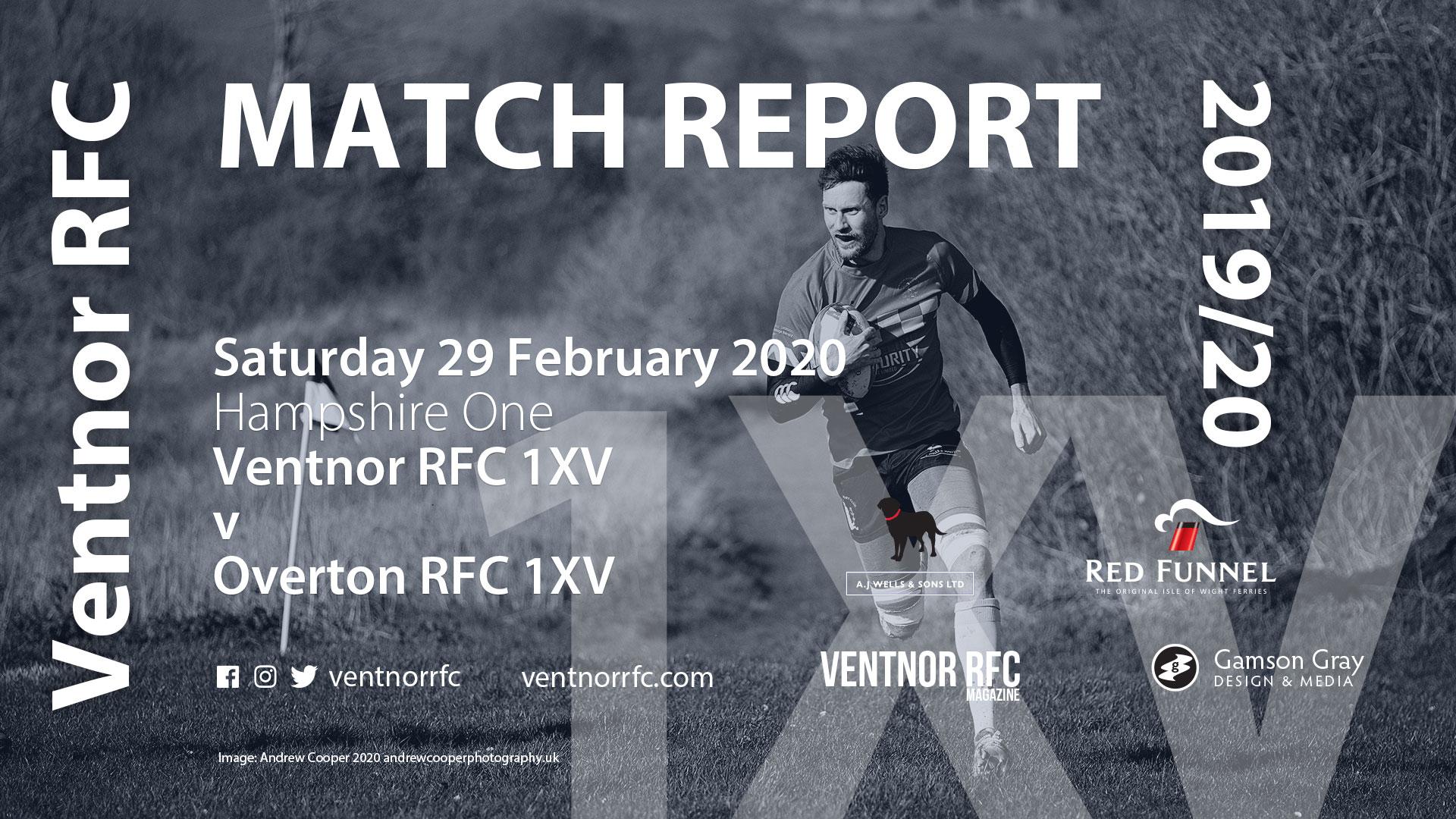 Two words sum up the feeling at the end of this game, but as one of them is unprintable, we will have to resort to just one: FRUSTRATING!

After another game in which they played all the rugby, Ventnor just failed to beat a strong and organised Overton side who arrived with a massive front five and set out their game plan of heavy-hitting from the outset.

However it was the hosts that showed the real attacking intent with skipper Lewis Jewy Jones putting in the hard yards with massive support from Ben Savill, Harry Colson and Ian Lane.
The new-found confidence in their rucking phase play is beginning to pay dividends with the quick-fire service of Louis Malkin at the heart of it complimented the commitment to support of the whole pack.

Indeed coaches Chris Fletcher and Fergus Kenny were rueing the loss of a couple of training sessions (due to Storm Dennis and his friends) to provide some fine-tuning after the great recent performances. And yet, despite this early attacking onslaught, it was the visitors who took the lead when a break out was followed by a scrum penalty. The kick was successful.

Unusually for Ventnor the set scrum was a real area of concern and coach Fletcher made an early tactical switch with the hard-working Tristan (Beast) Price coming off and Ben Savill crossing to loose-head and Adam (AP) Pratt joining at tight-head. This was harsh on Beast who has never let Ventnor down and was certainly no reflection on his own game.

But there was certainly some opposition boring-in going on and AP’s power helped to counter this while Savill was still there to provide his all-court game in attack and defence. Conversely, the line-outs were going well despite the storm-force winds, with Jewy’s throwing on the mark and Chris Hill and Andy Teague in imperious form. Indeed Hill managed to get his hands on quite a bit of opposition ball as well.

Even with wind, Ventnor refused to revert to the boot and kept the ball in hand and, soon after going behind, Ian Lane took the ball up and Louis Malkin put Sam Lines on his jinking way. Calvin Edwards provided the link and his soft hands gave Jake Babington the chance to streak over. Ed Blake converted and Ventnor were in the lead. However a series of indiscretions allowed Overton to work their way down the touch line and another dominant scrum allowed their No 9 to dart over.

There now began a series of might-have-beens for Ventnor. Blake missed a penalty before his characteristic powerful running put Sam Lines away but his final pass went to the wrong Babington – Stuart (who was running the touchline) rather than Jake! It was a moment worthy of the Red Funnel award but was to be trumped later in the game!

Then Hill picked up at eight knocked on in the tackle a yard short of the line. Blake broke through again but was stopped in the act of scoring. And then, in the last action before half-time, Babington was early-tackled as he was about to take a try-scoring pass from Lines. Therefore, at the break, Ventnor trailed 7 – 8 with the prospect of playing into the teeth of the gale in the second half.

However, it was Ventnor who went straight back on the offensive with the tireless Teague spearheading a massive forward effort. Dean Magnurson was providing his usual masterclass in the unseen dark arts of forward play but had to come off with a recurring injury. Paul Berry came on whilst the evergreen and ever-effective Rosco Harris was replaced by the more direct running style of George Finan.

Overton’s plan to hoof the ball down field didn’t really materialise – solely because they didn’t have that much possession. When they did, the marvellously calm and collected Justinas Urbonas did the needful at full back. Justinas is a hugely reassuring figure at the back and his choice of when to join the line is always on the nail. In a rare attack,

Overton scored when Ventnor’s defence went AWOL against a quick tap penalty.
At the restart, the strength of the wind was illustrated when Lines’ kick ended up ten metres into his own half – a situation that Finan did well to tidy up. Overton scored again from a five-metre scrum and suddenly it was all uphill for Ventnor as they trailed 7 – 18. What a response! With Overton beginning to tire, Ventnor stepped up, Berry taking the game to the opposition in no uncertain terms.

Blake continued to be the pick of the backs with his powerful bursts and Malkin’s choice of pass were providing targets everywhere. Finan worked his way into midfield, brushing off friend and foe on his way. The ruck was won and Jewy took the ball on. Malkin found Edwards who gave Jake Babington an inch of space down the left touchline.

Cheered on by the vocal support, the winger rounded his man and touched down under the posts for his second try of the day. With the losing bonus point in the bag, Chris Hill elected to save time with a quick drop conversion which duly missed its target – and secured Tangled the Red Funnel Moment of the Match award!

With time running out, Ventnor were back on all-out attack and Overton were reverting to all sorts of tactics to counter them. Lying on the wrong side of the ruck appeared to be the favourite although coming in at the side also featured strongly. The referee pinged them (on occasion) and the crowd courteously (!) offered the opinion that more than three penalties in the red-zone merited further punishment. But time duly ran out and the opposition scrum-half gratefully found touch as the final whistle blew.

Ventnor are firmly back in the relegation zone and need to turn these near-misses around. The re-arranged home game against Fawley next Saturday (7th March) provides them with an early opportunity to do just that.

Special mention must be given to Jacobus Stemmet for providing such a great playing surface despite all the weather that has come our way recently. Watcombe must be the best pitch in Hampshire One – as well as being the most picturesque.

A J Wells Man of the Match:  Jake Babington for two scintillating tries.

Red Funnel Moment of the Match:  Chris Hill for the attempted drop conversion. He appeared to get his legs tangled!

Ventnor RFC would like to thank our match sponsors for the day, namely: The Leconfield Hotel, The Millbay, The Sea Pot, The Smoking Lobster, The Two Cooks.

This match report and supporting images from Andrew Cooper Photography, will appear in the forthcoming Spring 2020 edition of the Ventnor RFC Magazine