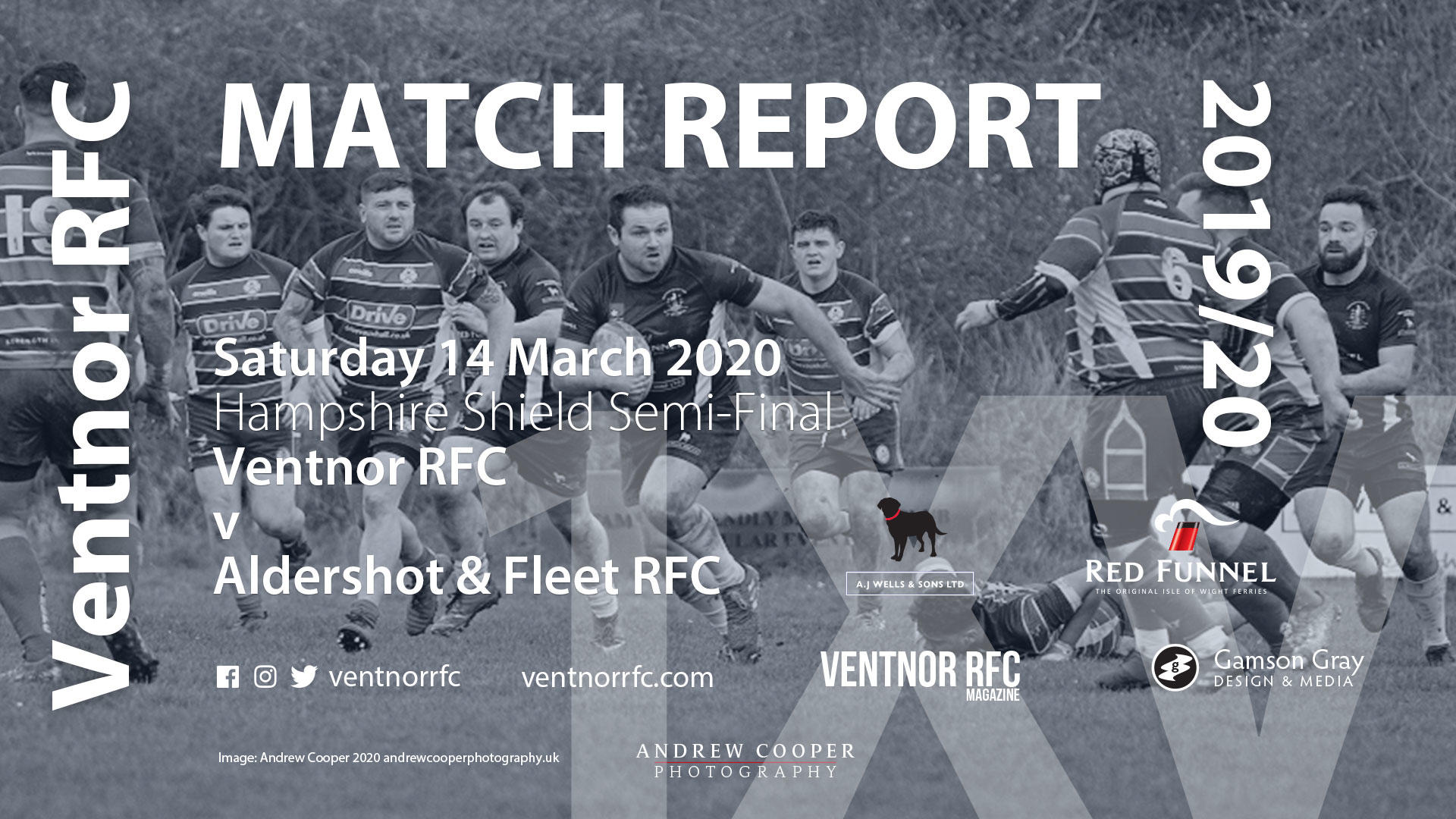 What a game! This was cup rugby at its best with both teams playing with huge intensity and equal sportsmanship so that the large crowd at Watcombe, in the Hampshire Shield Semi-Final- bolstered by the travelling support from Aldershot and Fleet – were treated to a pulsating match that went down to the final whistle.

Ventnor set out their game plan early, continuing their form of the previous week, with close in attacking patterns allowing support runners to make progress. The work of Ben Savill, Chris Fletcher and Dan Noyes was conspicuous as Louis Malkin was provided clean ball at the ruck and was able to pick and choose his pass.

Ventnor scored first when Chris Hill charged down an attempted clearance and Justinas Urbonas gathered the loose ball and flicked an exquisite overhead pass to Sam Lines who dived over in the corner.

Immediately back on the front foot, Iain Lane made progress before Hill was stopped by a high tackle and Aldershot and Fleet’s hooker saw yellow. Ross Harris kicked the penalty. However, just as the home team was gaining the upper hand, some carelessness set in with the ball being often lost in contact and the previously accurate phase play breaking down. In addition, the referee was busy with his whistle and some of the rhythm went out of the game.

This was harshly illustrated when George Finan made a characteristic charge up the blindside. Dominic Marsh and Malkin cleared out the ruck but there was no-one at home at scrum-half and the Aldershot and Fleet’s no 9 simply picked up the ball and scuttled in for a try.

Still reeling from this set-back, Ventnor then allowed the Aldershot and Fleet’s no 8 (who had a storming game) to break several tackles and touch down between the posts for a converted try.

Already beginning to get the upper hand at scrum-time, coach Fergus Kenny sent Tristan ‘Beast’ Price on to replace Fletcher. Beast moved to loose-head prop and the hard-working Savill dropped back to blindside flanker.

Even though Lane was hampered by bruised ribs, the scrum was getting ever stronger and the knowledgeable crowd were treated to a master-class in the lost art of old-fashioned hooking by skipper Lewis ‘Jewy’ Jones – not seen at Watcombe since the days of Bob Freer and Billy-Bob Engelgardt.

It didn’t matter who put the ball in, it came back Ventnor’s side! Contrarily the line out was not working too well for either side and Ventnor lost a couple of opportunities with knock-ons at the catch – one after an incredible clearing penalty from Lines that must have travelled sixty metres.

However, it mattered not, since a subsequent scrum was won against the head and Hill picked up and put Malkin in at the corner. Half-time came with Ventnor back in the lead 13 – 12.

Whatever was said at the break, it was Aldershot and Fleet who hit the ground running with a long penalty followed by two quick tries which put the home team back on their heels. Suddenly it was 13 – 29 and the game was surely gone.

Not a bit of it! Ventnor’s indomitable spirit was encapsulated by the performance of winger Ed Blake whose ability to take contact and stay balanced in his running is quite remarkable. Time after time he made progress and the tremendous fitness of Savill, Marsh and Hill provided the continuity for the power running of Adam ‘AP’ Pratt and Jones to take the ball deep into the opposition half.

AP was having a marvellous game, not only anchoring the dominant scrum, but also offering himself in the loose repeatedly.

Jewy almost got to the line, the siege was maintained and Malkin chose his moment to send out a long pass to Harris who forced his way over in the corner. Harris, his mouth bloodied, came off to be replaced by Oscar Fitzgerald who immediately made his mark with a try in the opposite corner after great work by Hill, Jones and Blake. 23 – 29. Game on!

Time was running out and it was all out attack from Ventnor. However the ball went loose, Aldershot and Fleet countered and suddenly the score was back up to 23 – 34 as their flanker touched down.

With just five minutes left it was surely over. No-one had informed Blake however and he got his deserved try after another scrum against the head and a typically mad-cap charge up field by the mercurial Hill. A converted try would do it!

From the restart Finan flew up the right wing, the ball was recycled and Calvin Edwards worked the ball back infield where the inexhaustible Marsh snatched a high pass and forced his way over! 33 – 34.
,
With the clock deep in the red, it was Blake who bravely stepped up to take the conversion that could win the game. To counter the wayward wind, he gave it a serious whack as the crowd held its collective breath. It looked good but then it clanged against the post and the final whistle was blowing even before it rebounded impotently back to earth. With the offending post still shivering, it was a sporting moment frozen in time as Ed sank to his knees with his head in the dirt.

In the best tradition of Flintoff and Lee, it was the Aldershot and Fleet RFC players who were the first to console him and drag him to his feet. Quite rightly Jewy awarded the A J Wells Man of the Match to the stricken winger who had to be reminded that the game would have been lost much earlier if it hadn’t been for his massive effort throughout.

It had been an outstanding game enhanced by the sporting Aldershot and Fleet RFC squad and their supporters who embraced the best traditions of rugby during (and after) the contest.

Footnote: Four of Ventnor’s six tries were scored by players of twenty or younger – a sign of great promise for the future.

A J Wells Man of the Match: Ed Blake for his all-court game and indomitable effort.
Red Funnel Moment of the Match: Chris Fletcher – the coach who fails to take his own advice about back-chatting to the ref!

This match report and supporting images from Andrew Cooper Photography, will appear in the forthcoming Spring 2020 edition of the Ventnor RFC Magazine