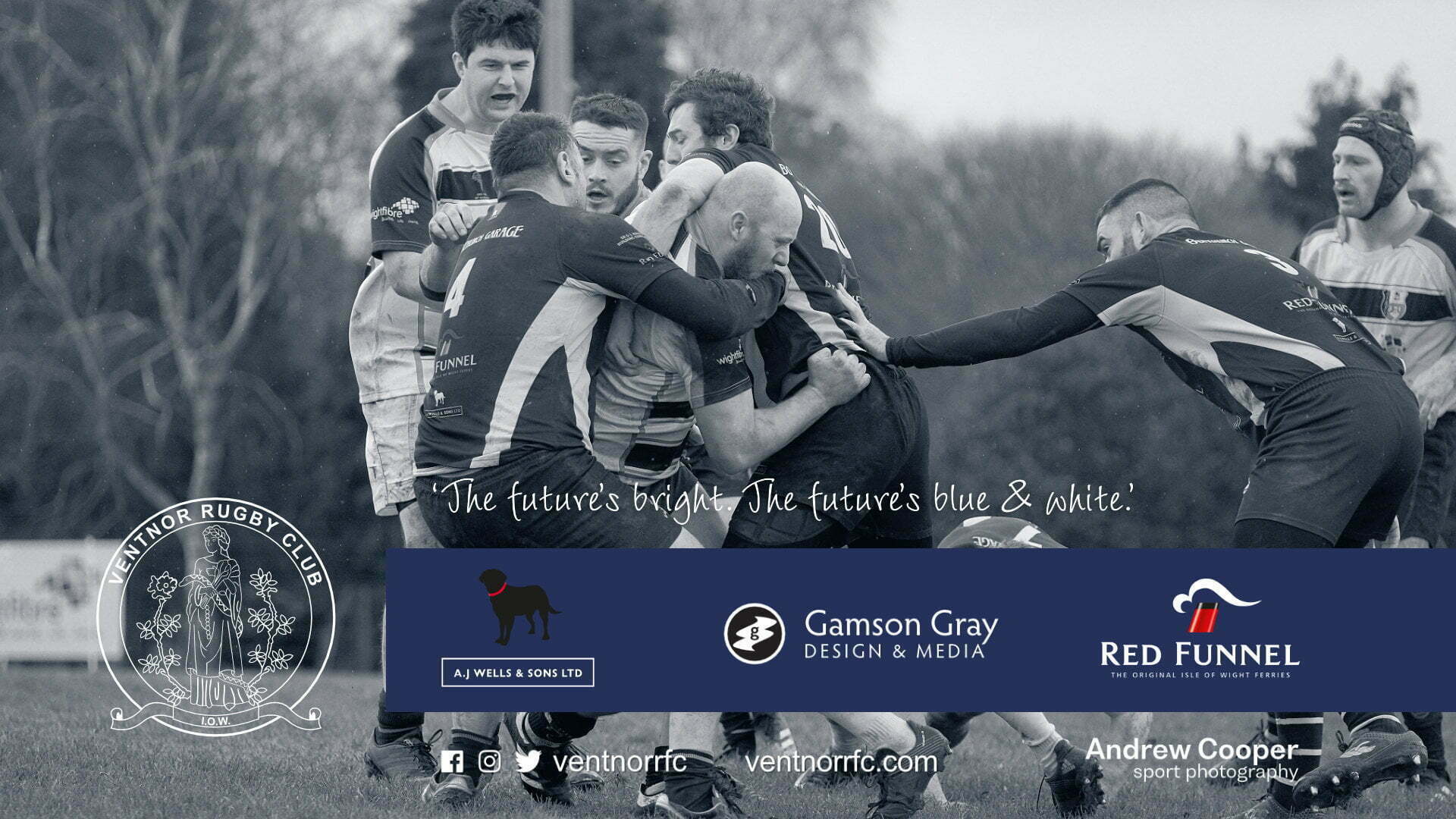 This was an important day for Ventnor RFC, for the Island and for national club rugby, with a local derby taking place at short notice with Sandown and Shanklin RFC v Ventnor RFC.

The three Island teams, Ventnor RFC, the Hurricanes (Sandown and Shanklin RFC) and Isle of Wight RFC, had been requested by the Rugby Football Union to pilot an adapted version of the game that will be then launched later in the month. There were obviously concerns about player safety with full contact rugby being proposed after a four-week lockdown and there was an open discussion among the coaches. The Ventnor players allayed these worries with a serious physical training session on the previous Thursday!

Isle of Wight RFC, on the other hand, took a more circumspect view and only six of their players made themselves available on the day. The upshot of this was that the three-way round-robin format proposed for the event had to be abandoned and the Isle of Wight RFC players were integrated with the Ventnor squad.

While this gave Ventnor a numerical advantage it actually worked against them because it meant that coach Fergus Kenny had to integrate them into a playing format that the Ventnor squad have been working on since training started in July! It also meant that there would be just a single game with none of the debrief sessions that had been part of the concept at the event’s inception.

The importance that the RFU was giving to this game was illustrated by the presence of Adam Leal, the Premiership Rugby referee – fresh from officiating at the Bristol Bears RFC v Northampton Saints RFC game the previous evening and due to be at Twickenham Stadium the next day for the England v France match of the Autumn Nations Cup Final 2020!

As his whistle sounded for the start if the match, Ventnor – fielding their full squad – started strongly and, although the Hurricanes came close a couple of times some excellent try-line steals from Harrison Marsh, Lewis Jones and Ben Savill stopped their momentum.

It soon became obvious that, without scrums and mauls to concentrate players in one area of the pitch, there would be no space for open, running rugby and that the game would basically be rugby league with the bonus of rucks to provide continuity.

Nonetheless, in attack, Ventnor began to show their form with Jack Nutter, on debut, conspicuous with his pace and guile but there was little space for his and Sam Lines’ fast feet to cut through. The Ventnor coaches had warned the team that rolling away after a tackle was going to be vital due to the strict policing of this by the top referees, but it didn’t work out that way in practice and the Hurricanes became adept at slowing down the rucks.

This resulted in a delayed ball that negated the speed of Louis Malkin’s excellent service and the midfield began to become a logjam. It also became apparent that some players were relishing the contact after so many months off and the ball rarely made its way to the wings where some of Ventnor’s potency lay.

Later in the half, the Hurricanes were back on the attack and – led by the excellent Sam Flux – began making progress through the middle. Ventnor were penalised for offside and Flux took a quick tap that took him up to the line. Fast hands then provided space down the right and despite desperate cover tackles by Lewy Morton and Tom Crewes, the try was scored.

Ventnor suffered a double blow at this point because Chris ‘Tangled’ Hill was hurt in the build-up to this try and had to leave the field with a damaged shoulder which was tended to by Steve Marsh and Zoe Jones. Despite those pre-match concerns expressed by some, this was the only serious injury in the match which, considering the physicality of the game, was quite remarkable and a testament to the conditioning of all concerned. In fact, there was hardly a stoppage of play throughout.

Undaunted, Ventnor went straight back on the front foot and a monster charge by Harry Colson led to a try line siege which the home team could only counter by continual foul play which, quite correctly, resulted in a yellow card. Max Wheeler slotted the penalty and it was game on! At half-time it was 5 – 3.

Half time gave Ventnor time to regroup and they started the second half strongly. Quick handling by Nutter, Ed Blake and Jake Babington gave George Finan that inch of space he needed and he beat his man and crashed over for an excellent try so that Ventnor took the lead.

Once again, the quality of Ventnor’s young players – such as Finan, Nutter, Malkin, Crewes and Dom Marsh – was very much in evidence. Unfortunately, the lead was short-lived however as Ventnor committed the cardinal sin of messing up the restart reception and were immediately under pressure on their own line and Andy Gough scored against his old Ventnor mates!

After that, the game got away from Ventnor as coach Fergus Kenny concentrated on giving everybody a game – including the Isle of Wight RFC players – and the defensive pattern was compromised. This is by no means a criticism of the Isle of Wight RFC guys who turned out because they were all good players and great lads, but it did mean that the defensive line became fragmented and for all the excellent cover tackling of Dominic Marsh, Justinas Urbonas and Andy Teague, several more tries were scored to put the game out of reach.

All in all, it was an excellent game played at pace and in great spirit. Despite the difficulties of integrating ‘foreign’ players, the Ventnor squad had shown real commitment to the new patterns of play and there is much optimism for the future. We wait to see the format of the new ‘friendly’ competition that is being proposed, starting in a couple of weeks’ time. Rest assured, we will keep you informed.

You can purchase a Ventnor RFC club tie here:

Thanks to our club sponsors, including

Situated on the south coast of the Isle of Wight, Ventnor Rugby Club enjoys one of the most dramatic and picturesque grounds in the country. The pitch and clubhouse are located in the base of a natural bowl that cuts into the slopes of Week Down to the north with panoramic views of Steephill Cove and the English Channel to the south.

Renowned for its sociable welcome to visiting teams and casual spectators alike.

Why not join Ventnor RFC?

Player membership starts is £16 per month. Yearly membership and concessions options are available.

Standard fees for players remain at £16 per month, (£192 per annum), with concessionary fees for students and the unemployed set at £8 per month (£98 per annum). Fees become due from the 1st September.

The cost thanks to our sponsors and VP’s remains significantly cheaper compared to the other two clubs on the island.

Remember if you intend to play for Ventnor RFC you MUST have a players membership as a minimum for your RFU insurance to be valid.

Non-playing members (V.P.s) are also welcome to join the club, from £5 per month.

Find out more on playing for Ventnor RFC

Thanks to Andrew Cooper Photography