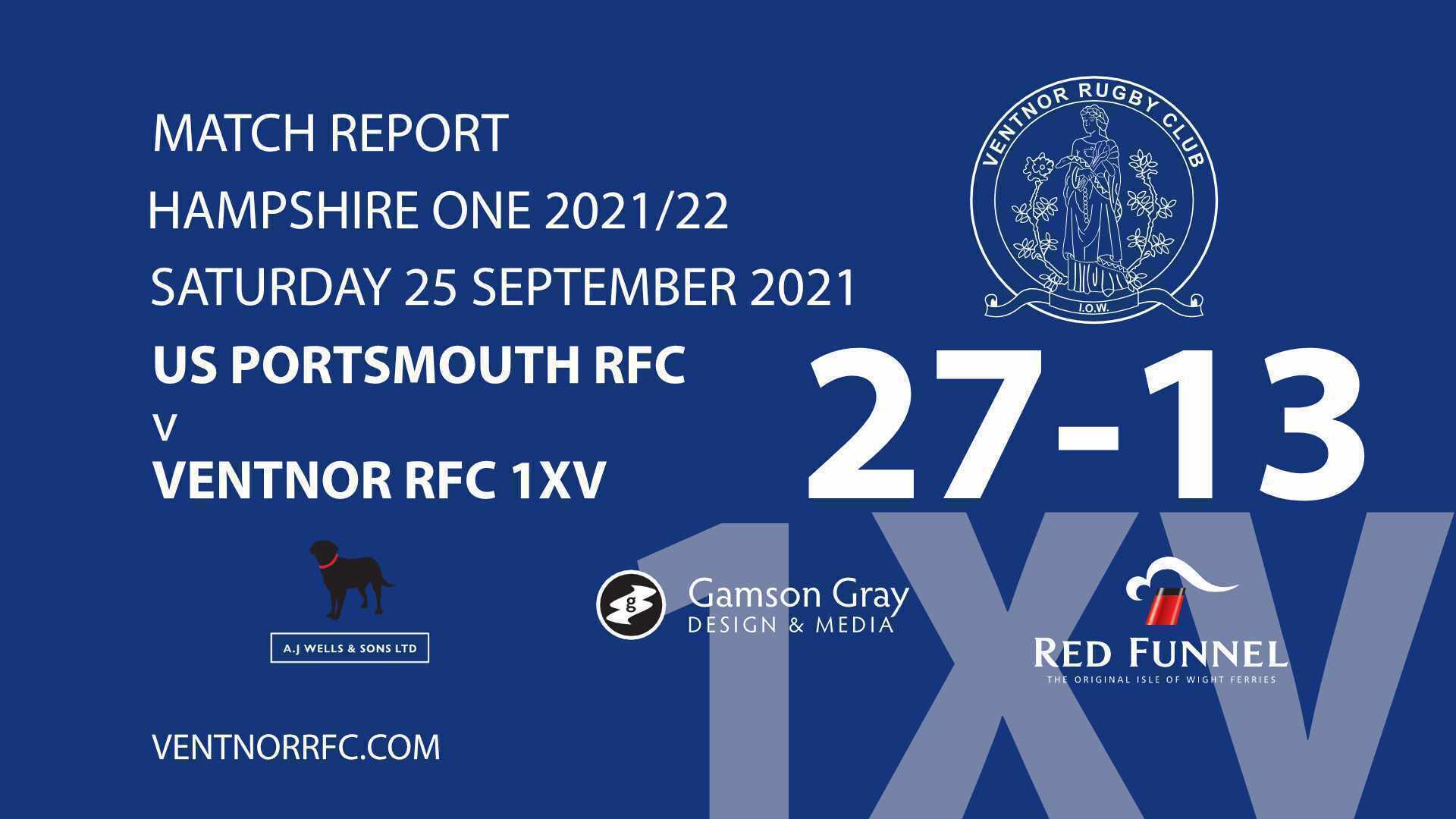 On a ground where recent previous matches have resulted in heavy losses, Ventnor suffered a 27 – 13 defeat but with a great deal of positives to ponder.  US Portsmouth RFC deserved their win with the interplay of their forwards and backs but Ventnor assisted them with repeated generosity when they failed to look after the ball. This spoiled several promising attacks and relieved any pressure that they could exert.

The early possession was all US Portsmouth and only a great cover tackle for Luke Butler saved a try down the left wing before a lucky bounce from a blindside hack ahead led to the host’s first score.

However, it was obvious that Ventnor’s set scrum was well on top where Harrison Marsh, Lewis Jones and (the A.J.Wells man of the match) Ben Savill were putting the opposition front row under enormous stress – both on their own ball and on US Portsmouth’s who did well to get the ball away without penalties.

After this initial setback, Ventnor went on the attack and great work from Dan Bell, Guy Entwistle and Marsh led to a penalty won by a jackaling Joel Walton which Tom Crews nonchalantly kicked to bring the score back to 5 – 3.  This was followed by a period of cut and thrust in which both teams showed great enterprise but the respective defensive work-rate nullified their efforts.

To counter this, Ventnor began to look for the offload and, in a break-down in communication, US Portsmouth gained possession and scored a second unconverted try.  Entwistle then had to leave the field for treatment and Ed Blake took an unaccustomed position of flanker while George Finan came in the three-quarters. This rearrangement unbalanced the fringe defence and US Portsmouth scored their third try just before the whistle for half-time.

During the break coaches Chris Fletcher and Fergus Kenny brought Adam Pratt on in the front row in place of Marsh who dropped into the back-row. Finan, who was feeling an injured shoulder came off and Entwistle returned, this time at outside centre.

At the start of the second half,US Portsmouth had their purple patch scoring two quick tries – the second one an outstanding move involving forwards and backs over most of the length of the field – so that the score stretched out to 27-3.

However, Ventnor never gave up and their scrum advantage at last came into play with Harry Colson holding the ball at the back and winning a penalty and a yellow card for the US Portsmouth scrum-half who slapped the ball out of Louis Malkin’s hand. Crews kicked for touch, Bell won the line-out and great running from debutant Matthew Fletcher caught the US Portsmouth defence offside.

Jones called for the scrum and the Ventnor eight drove over the line for Colson to touch down to provide the Red Funnel moment of the match.

With the US Portsmouth effort fading and Ventnor’s fitness beginning to tell, space began to open up and an outstanding slalom from Sam Lines led to a good position in midfield which was squandered by a penalty at the resulting ruck. Evident in all aspects of play was the support running from Ventnor with Bell, Savill and Andy Teague to the forefront.

Flyhalf Luke Butler then left the field with a calf injury and the ever-improving Cory Turner came on. Then it was Jake Babington’s turn to show his skill, side-stepping without any loss of speed from his own twenty-two until he was bundled out five metres from the try-line.

Ventnor then won the scrum and went for the push-over again. The US Portsmouth pack was utterly splintered and there was a possible case for a penalty try but the referee played on and in the subsequent goal-line attacks Ventnor were pinged for crossing and the last chance was gone.

The A.J.Wells Man of the Match:  Ben Savill

The Red Funnel Moment of the Match:  Ventnor’s push-over try.

Next Saturday 2 October 2021, Ventnor RFC 1XV are due to host Romsey RFC, with kick-off at 3pm at Watcombe Bottom