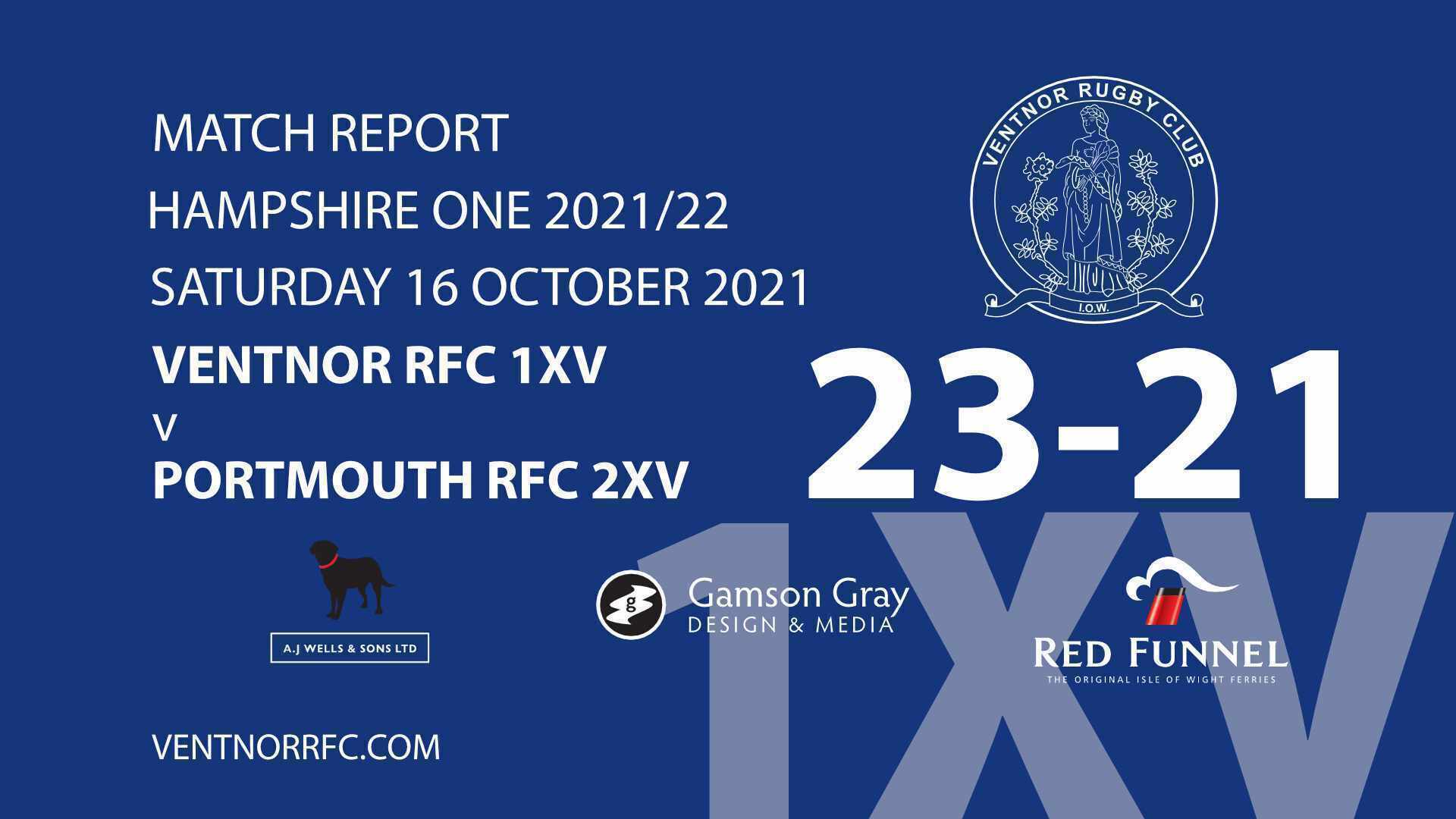 Ventnor seem to want to do things the hard way! After their second-half comeback against Romsey two weeks ago, Ventnor RFC 1XV 15-9 Romsey RFC Saturday 2 October 2021, they won this match against Portsmouth RFC 2nd XV with very last kick of the game.

In front of a good crowd at Watcombe, the game started evenly with both sides showing attacking intentions.  Portsmouth RFC were the first to show until Ventnor’s set-piece began to take control. With Adam Pratt, skipper Lewis Jones and the tireless Ben Savill once again showing dominance in the front row, Ventnor’s eight splintered the Portsmouth pack to win an early penalty.

From a subsequent lineout, Paul Berry, Sam Lines and Lewy Morton set Ed Blake away up the right and the powerful winger bustled his way over the line leaving several defenders in his wake.  Without the injured Tom Crews and Luke Butler, Ventnor were short of their usual kickers so Calvin Edwards bravely stepped up but he was just short.

Ventnor were on top but were guilty of playing too much rugby in the wrong areas of the pitch and a miss-move between Lines and Jake Babington broke down in their own half allowing the opposition centre to pick up and sprint unopposed under the posts.

Suddenly Ventnor were losing 5 – 7 and continued to rush the game and – once again – were beginning to give away too many penalties in their anxiety to wrest back the initiative.

This allowed Portsmouth to gain territory and Edwards and Morton did incredibly well to hold up their big second-row over the line. The ever-dependable Dean Magnurson left the field to be replaced by veteran Todd Riches but the penalties kept coming and – this time – nothing could stop a quick tap leading to a crash-over try.

Ventnor were determined to get on the front foot.  Their scrum was still dominant and Louis Malkin’s silky service was beginning to provide Lines some space to move. This led to a great break up the right that almost brought a try for George Finan but the final pass went to ground.

Undaunted, Ventnor kept attacking and a fine break by Berry was only stopped by a last-ditch tackle but his pass off the ground found the supporting the A.J. Wells man of the match Lewy Morton who carried a couple of defenders over the line with him.

From the start of the second half, it was all Ventnor. The constant pressure on the Portsmouth forwards was giving Jones and the powerful Andy Teague chances to get over the gain-line and another charge up the centre provided space for Lines and Babington to put Blake over for his second try.

This was quickly followed by another after a dominant scrum and perfect passing between Malkin, Lines, Berry and Blake gave the latter space to round the defence and crash over for his hattrick.  It was a classic try that had the crowd at the picturesque Watcombe ground purring.

With the score reading 20 – 14, it looked good for Ventnor but Portsmouth never gave up and it took some remarkable cover tackling from Chris Hill, Berry and Joel Walton to keep them out.  Charlie Magnurson came on and immediately showed his huge potential with an excellent turnover but the home team were still trying to play rugby in the wrong areas and their kicking game was only giving away possession.

With two minutes to go, Portsmouth launched one more attack and a great running line caught the home defence on the wrong foot and suddenly it was 20 – 21 with the clock heading into the red.

Ventnor kicked off and great pressure on the Portsmouth receivers led to one last scrum.  Time spent on the scrum machine in training paid off with another massive effort.

The Portsmouth eight cracked and the referee’s whistle blew. Penalty to Ventnor! With admirable quick thinking, Jones called Todd Riches back onto the pitch and the big forward gathered his composure while the crowd held its collective breath. Riches stepped up and – with a lazy swing – the ball bisected the posts for the three points.

The ref’s whistle blew again. Full time and a dramatic win for Ventnor 23 – 21!

While a jubilant home team celebrated their third victory of the year that brings them to within one point of the top of Hampshire Division One, their coaches, Chris Fletcher, Fergus Kenny and Clive Hill could reflect that it was a win gained by great individual performances across the pitch, but that there are still huge improvements to be made both in teamwork and strategy choices.

The A.J.Wells Man of the Match:  Lewy Morton

The Red Funnel Moment of the Match:  Ed Blake’s hattrick of tries

The next fixture is Saturday 23 October 2021, where Ventnor RFC 1XV are away to Fareham Heathens RFC