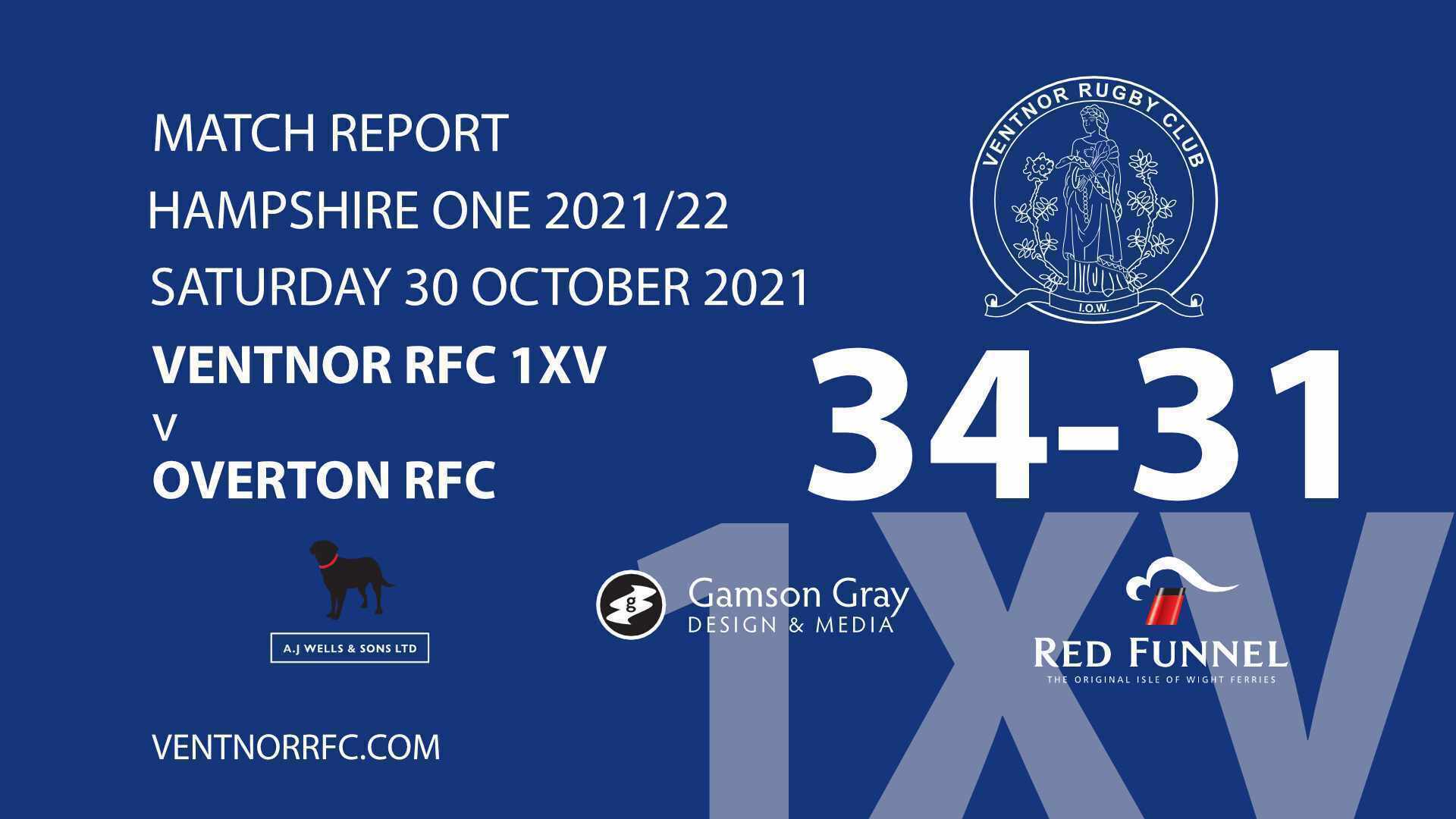 Despite several injuries, Ventnor were still able to field a strong team to play the traditionally combative Overton side. James Morley and Todd Riches returned to the starting fifteen and both had cracking games.

As is becoming the norm, Adam Pratt, skipper Lewis Jones and Ben Savill were dominant in the scrum and an early strike against the head led to a powerful attack with Jones just stopped short of the opposition tryline.

However, as is also becoming annoyingly common, Ventnor let Overton off the hook with unnecessary penalties and the visitors broke up the left for a converted try to take the lead. Ventnor struck back immediately with Tom Crews fielding a towering kick and sending the impressive Jake Babington with a huge cross-field pass. Babington made ground, Ed Blake took it on and then passed inside for Sam Lines to score. Crews converted and it was all even at 7 – 7. This was followed by yet another scrum against the head that allowed Louis Malkin to find Todd Riches and the big flyhalf passed inside to Babington who cut a lovely line to touch down in the left-hand corner.

Ventnor’s dominance at the scrum and their seven-point lead suggested it would be one-way traffic but – with Luke Butler missing – their kicking game was more hopeful than clinical which allowed Overton to strike back with their strong forwards. Coupled to this issue was Ventnor’s habit of putting too many bodies into defensive rucks providing room on the fringes to expose the home team’s backline and they scored with a converted try to take the lead again. Ventnor struck back once more with Crews powering up the righthand touchline to put Ed Blake in at the corner – his eighth try of the season. With halftime approaching, Ventnor then made a questionable decision to take a scrum at a penalty under the shadow of their posts.

A mix-up between Malkin and Riches resulted in a try for Overton despite Malkin being held without the ball and a very dodgy looking touchline. To add insult to injury, Overton then scored again in an excellent handling move during which two forward passes and a knock-on were missed by the referee.

Also, the always strong Andy Teague was off with a shoulder injury to be replaced by veteran Tristan ‘Beast’ Price. Not for the first time this season, Ventnor needed a strong second half to maintain their record of wins at fortress Watcombe.

As the half kicked off, Beast took his position at prop and Savill moved to the second row. If Overton thought this was going to release the pressure at scrumtime, they were immediately disabused when another scrum against the head gave Calvin Edwards a chance to dive onto the loose ball for a score which Crews converted.

This was followed by a great try when another strong scrum gave Malkin space to put Riches away. Quick passing between Riches and Lines put Paul Berry away on a long diagonal run to the line for the bonus point try. Crews converted again and Ventnor retook the lead 31 – 26.

Ventnor were ramping up the pressure and won a penalty just in range. Jones called up Crews and the fullback slotted to put Ventnor two scores up. This turned out to be a crucial decision because Overton rallied once again and scored again which they failed to convert.

It was all Overton now with their lineout working well. Price came off to be replaced by Alex Morton who straightaway put himself about with some strong tackling as the pressure mounted. Indeed the tackling of the whole back row was exceptional with Joe Coghlan conspicuous with his tenacious work-rate highly encouraging.

No less impressive was the performance of Dean Magnurson – 30 years Joe’s senior – who, as ever, was involved in all the work on the floor.

James Morley, on his recall, was voted A.J. Wells man of the match for his all-court game, at one occasion putting a grubber kick through to put the Overton defence under massive pressure. Indeed it was Morley’s catch at a lineout and a pragmatic boot straight back into touch than ended the game.

The A.J.Wells Man of the Match:  James Morley

The Red Funnel Moment of the Match:  Joe Coglan

Next Saturday 6 November 2021, Ventnor RFC 1XV are away to Tottonians RFC 2XV