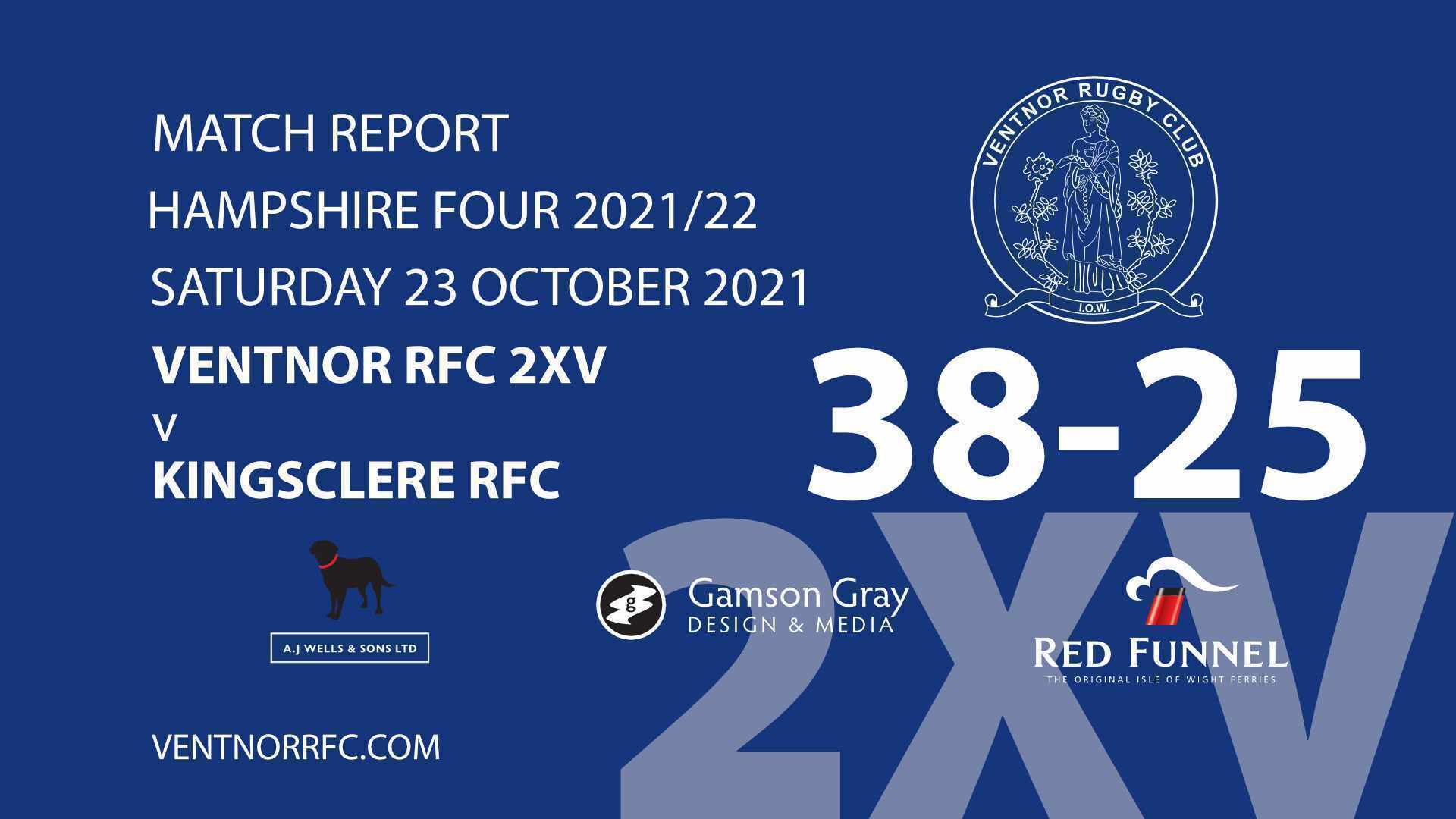 This was a great game of rugby, full of skill and commitment against a sporting Kingsclere RFC fifteen who never gave up. Ventnor were first to show with Jac Stemmet, Ben Gough and Tristan Price in the front row providing dominance in the set-piece.

Ross Harris and Todd Riches rolled back the years with great displays at nine and ten and they set Charlie Magnurson and James Morley free to make ground up the right resulting in a try for the evergreen Warren Riches with support from Dave Adkins.

Morley was in terrific form throughout and a memorable dummy pass to himself gave Ventnor field position for Charlie Magnurson to drive over off the back of another powerful scrum. Warren Riches converted again and Ventnor were 14 points up.

However, a determined Kingsclere fought back strongly and scored a converted try despite great defence from Henry Walker and James Blake. With halftime approaching, it was anyone’s game but Todd Riches calmed the home crowd’s nerves with a try under the post which Warren Riches converted.

Kingsclere were the better team early in the second half and came back into the game with a converted try and a penalty.  Indeed, the referee was beginning to ping the home team regularly as ill-discipline crept in and Tom Engelgardt was shown a yellow for a bit of ill-advised back-chat! Skipper Dean Magnurson – who was immense throughout – read the riot act and Ventnor gained new focus.

Thanks to the agreement of a sporting Kingsclere team, Ventnor were able to ring the changes throughout the game and Steve Marsh, on the sideline, skilfully handled the rotation.

There were particularly promising debuts for the Harrison brothers – Connor and Will – and for Tom Davies whose driving play was especially formidable and resulted in his winning the A.J. Wells man of the match award. Aaron Newman (Fred) also showed sparkling form on his return to Ventnor’s colours, harrying the opposition both in the lineout and in open play.

With this new momentum, Ventnor were getting back on top and a storming run from Adkins followed by a dervish-like charge by Walker led to a penalty close to Kingsclere’s line.

Quick thinking by Alex Morton resulted in a score being denied by foul play and the referee pointed under the posts for a deserved penalty try. Morton then followed this up with a try of his own after great work by Simon Benfield and yet another run by the elusive Oscar Fitzgerald and support from Gareth Gough.

Kingsclere came back again and only magnificent cover tackling by Wheeler and the ridiculously brave Ben Atkins prevented further scores. Once again it was an open game but another powerful scrum gave Harris room to work infield where he linked with Todd Riches, running a perfect line, who scored under the posts. The Rev Warren Riches converted and put the game beyond reach.

The next game for the 2nds is away at Petersfield RFC next Saturday (30th October).