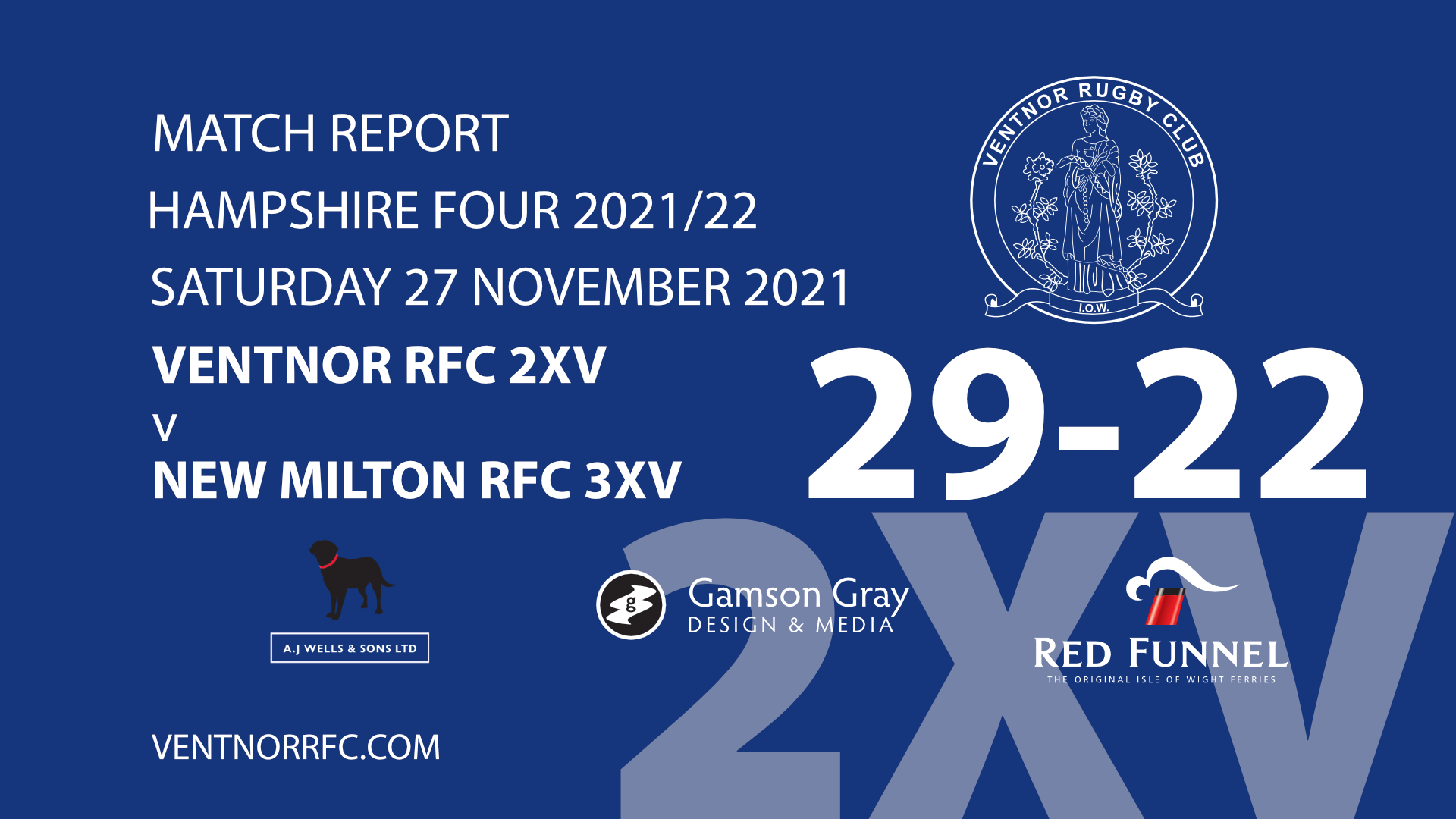 With Storm Arwen blowing freezing winds across the pitch, this match had every excuse to become an error-strewn non-event. But far from it! Both teams played an exciting brand of rugby and demonstrated commitment and skill that transcended the conditions. New Milton were a cohesive unit, strong in the set piece and well drilled at the maul and in their kicking game but Ventnor were the more determined and hungrier team with every player contributing to a great win.

At kick-off, New Milton and District RFC 3XV were on top and laid siege on the Ventnor line that held firm with excellent defence from the centre pairing of Louis Wyatt and Alex Morton plus the powerful disruptive rucking of Ben Gough, Nathan Ricketts and Simon Benfield.

Ventnor began to assert themselves and the direct running of Will Harrison and Charlie Magnurson gave them a foundation from which the excellent Ed Clarke was able to disrupt New Milton at the back of a scrum for Harvey Walker to pounce on the loose ball to touch down.

Despite the conditions, Andy Gough slotted the conversion so Ventnor took a 7–0 lead. Ventnor’s physio, Steve Marsh, was ringing the changes with Dan Noyes and Joe Pettifer making welcome returns to Watcombe and both having outstanding games.

New Milton RFC fought back and a few Ventnor indiscretions gave them a position from where their strong forwards battered over the line to bring the score back to 7-5 at halftime.

The second half began well for Ventnor with Michael Cooper weaving his way through the midfield to set Skipper Dean Magnurson away down the left. His perfectly timed pass found Walker who dived in at the corner for his second try. 12-5.

Again New Milton RFC came back and a drop goal by their fly-half brought the score back to 12-8 but Ventnor struck back immediately when Grant Richardson caught the kick off and almost reached the line. From the ensuing rucks the Ventnor forwards worked a position and Clarke put Pettifer in for a blindside try. 17-8.

Once more, New Milton fought back and scored another close range try that was converted. 17-15.

It looked perilous for Ventnor because New Milton’s kicking game was paying dividends but a brilliant touchline catch and run from Rosco Harris gave the home team an attacking platform from which Cooper swerved over. Andy Gough converted. 24-15.

Into the last quarter of the match Ventnor were beginning to get on the wrong side of the referee and New Milton were able to ramp up the pressure. Gareth Gough was injured after brave defence so that Cory Turner came back on and the line was held until two successive yellow cards for Richardson and the returning Alan Fox allowed the visitors to score again.

So it was 24-22 with ten minutes to go and just thirteen men on the field for the home team.

Ventnor’s character came to the fore and New Milton never came close to their line as the Islanders attacked relentlessly and somehow got onto the front foot.

Thus with the last move of the game, Richardson (straight back on after his yellow card) plunged over and made the game safe.

The A.J.Wells Man of the Match: Ed Clarke

The Red Funnel Moment of the Match: Alan Fox

The next game for the 2nds is away at Eastleigh RFC 3XV next Saturday 4 December 2021.