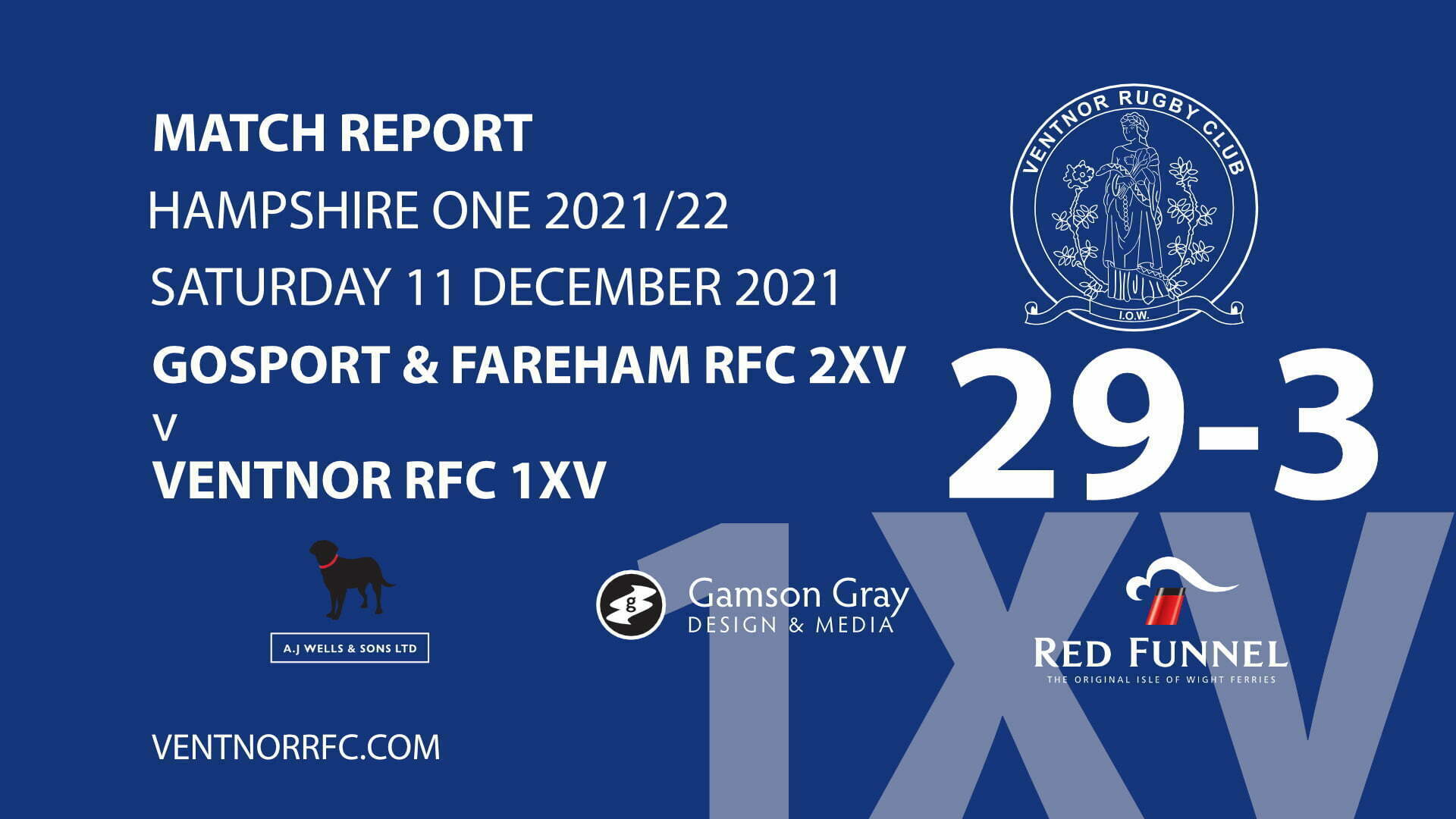 The Ventnor RFC 1XV team will probably look back at this scoreline and think here is another game that should have been won. Although there were some very good individual performances it was the lack of coordination across the team and the inability to retain possession through several phases that ultimately allowed a well-drilled Gosport & Farehamm RFC 2XV side to take the win.

Ventnor started brightly enough (despite having to walk the last half mile to the ground as a removal lorry blocked the progress of the team coach) and Thomas Crews’s boot added the 3 points for a penalty after Gosport were guilty of hanging on to the ball on the floor.

Gosport had an early chance to level when Ventnor were penalised for offside, but the kick went wide.

The Gosport fly-half made the most of his next opportunity though when Max Wheeler was (harshly) penalised for clearing the man out at the ruck.

Shortly afterwards a missed move in the centre presented Gosport with a nailed on try but for the immense tackle from Joel Walton that denied the score. Ventnor then lost Wheeler (twisted ankle) and Calvin Edwards came off the bench.

Honours remained even for the rest of the half with the Ventnor defence managing to snuff out the Gosport packs’ pick and drive attacks although they lost Chris Cardwell Hill in the process to be briefly replaced by Tom Davies.

Despite some good forward carries from Teague, Fletcher, Bell and skipper Jones, Ventnor were unable to retain possession over a period of time, either through losing the ball at the breakdown or the final pass going astray.

Early in the second-half Ventnor were penalised for standing up in the scrum and the resulting penalty kick pinned them 5 metres from their tryline. From the lineout the Gosport pack carried the ball well to split the defence and go over for a try which was successfully converted. 10-3 very quickly became 15-3 when Ventnor (not learning from the same move in the first half) failed to pick up the runners from a miss move and Gosport crossed the line again.

A period of good pressure from Ventnor in the opposition 22 came to nothing (which seemed to be the theme for the day) when the ball did not go 5 metres at an attacking lineout. Then Ventnor were penalised for not releasing, allowing Gosport to clear into the Ventnor half.

After some more good work by the Gosport forwards, that set their backline moving forward, some poor Ventnor tackling led to a try under the posts, with an easy conversion to follow. 22-3 and, as often seems the way in these situations, Ventnor became frantic in their efforts to turn the game around but, try as they might, were unable to threaten the Gosport line.

Some fine cover tackling by Joe Coghlan and excellent defence under the high ball from Crews kept Gosport at bay. Ventnor then brought Davies back on for Hill and Cory Turner replaced Cooper, immediately being called on to make some good tackles on the wing in defence.

The final nail in Ventnor’s coffin came from another miss move in the centre and the successfully converted try brought the final score to 29-3.

Some harsh lessons to be learned in losing to a team a couple of places below them in the league and Ventnor will be hoping to bounce back to winning ways when they entertain United Services Portsmouth RFC at Watcombe Bottom next week (Saturday 18th December 2021).

Hopefully, they will be able to develop the number of good, individual performances into a cohesive team effort and the best way to achieve that is on the training field.

Ventnor now lie 14 points off the top of Hampshire League Division One, at 7th in the league table.

The AJ Wells Man of the Match: Thomas Crews (Freddie Steward-like under the high ball and some excellent defensive tackling)

The Red Funnel Moment of the Match: Joel Walton (his tackle preventing a certain try)