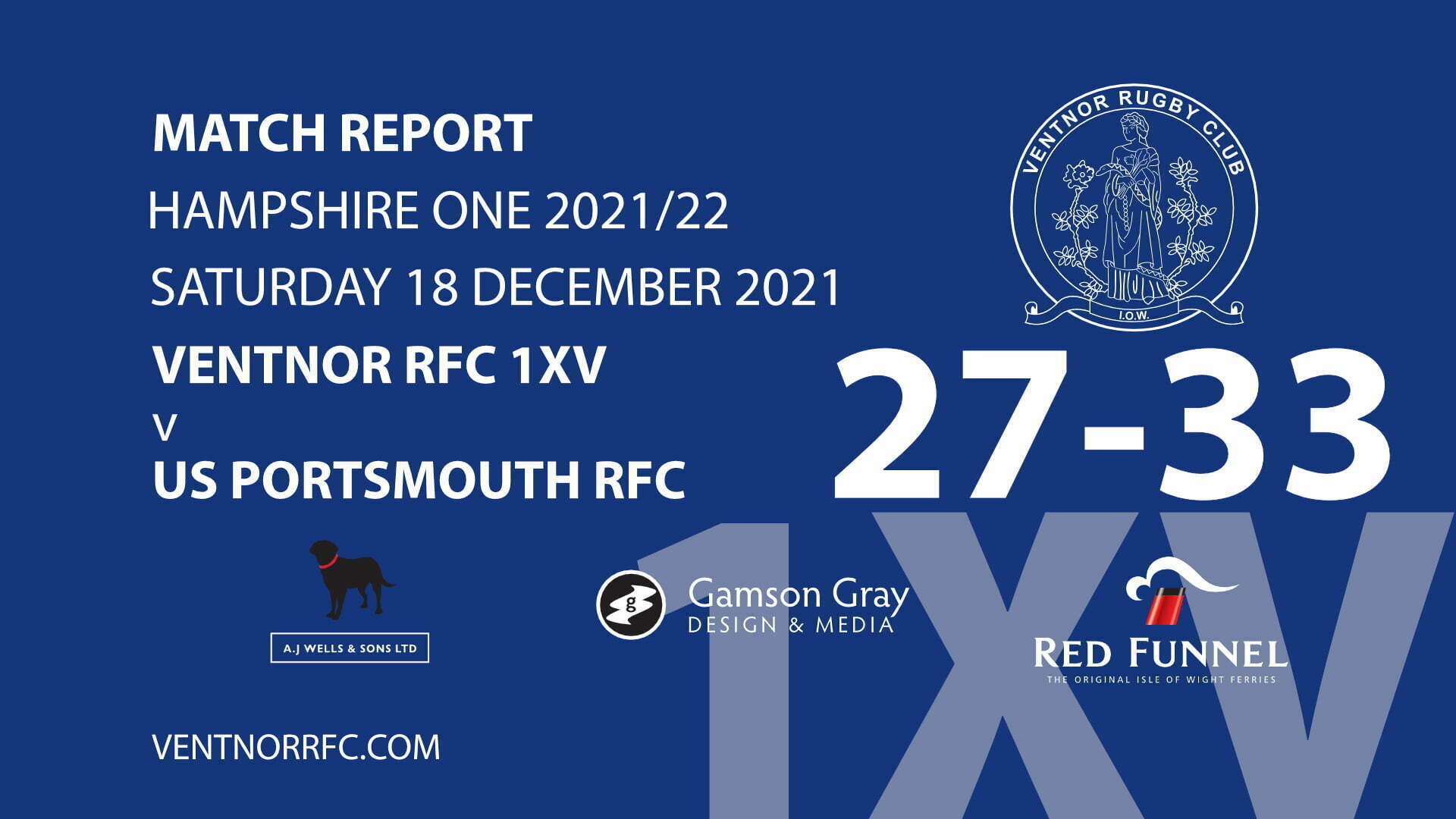 A large and vociferous crowd watched yet another thrilling match at Watcombe when Ventnor hosted league leaders US Portsmouth RFC with the Islanders desperate to maintain their home ground as a fortress. Unfortunately, it didn’t work out that way but that cannot detract from a magnificent match of rugby played with huge commitment and no little skill by both sides.

The match kicked off with US Portsmouth RFC on the attack and Ventnor defending manfully with Calvin Edwards, Ben Savill and Andy Teague prominent. Just when it looked like the pressure had to tell, Ventnor achieved a turnover that allowed Sam Lines to break out and send a raking kick upfield that was chased with such effect by Dan Bell and Cory Turner that the opposing fullback had no option to hack the ball into touch.

Skipper Lewis Jones found his jumper Joe Coghlan – who ruled the aerial battle all afternoon – and Louis Malkin’s quick service gave Jake Babington an inch of space so that the rangy winger touched down far out on the right.  The nerveless Tom Crews slotted an excellent conversion and Ventnor led 7 – 0.

However, the lead didn’t last long since US Portsmouth RFC piled on the pressure again and a charged down kick resulted in a converted try to bring the scores level. Despite Babington almost breaking through again, US Portsmouth RFC then entered into a period of dominance either side of halftime with two more converted tries to take the score out to 7 – 21 and the crowd began to fear the worst.

But Ventnor are no soft touch nowadays and they came straight back when Bell and Lines put Babington over for his second try.

Then a strike against the head – with Tristan Price belying his years in the front row – allowed Edwards to send an outrageous flick pass to Ed Blake and the powerful winger somehow made it to the line despite the attentions of the massed defence. Ventnor began to ring the changes with Tom Davies, Dean Magnurson coming on to replace Teague and Edwards.

Once more US Portsmouth came back with two tries to snatch an apparent winning lead 22 – 33 and for the first time Ventnor’s defence began to look a little shaky.

But the home side never gave up and, led by massive charges by Joel Walton and inspired by some huge hits by Chris Dobbas, they worked their way upfield and put the US Portsmouth line under siege. However, a stray pass looked to have blunted the attack so that debutant Louis Wyatt – on for Turner at halftime – had to collect the ball whilst retreating. Somehow he turned and jinked his way towards the left touchline – leaving a trail of helpless defenders – before cutting back and reaching the line for what must be one of the best tries ever witnessed at Watcombe. Crews’ conversion hit the crossbar and bounced out before the final whistle blew to leave the final score 27 – 33.

Despite the defeat, it is worth reflecting that Ventnor still have several first-choice players either injured or unavailable and that this performance speaks volumes to the depth of talent and character that is now coming through.

The A.J.Wells Man of the Match: Dan Bell

The Red Funnel Moment of the Match: Joel Walton

Ventnor RFC 1XV return to play in the New Year, with their next scheduled fixture away to Romsey RFC 1XV on Saturday 8 January 2022.

Meanwhile, the next scheduled fixture for Ventnor RFC 2XV is also on Saturday 8 January 2022 away to Southampton RFC 2XV.