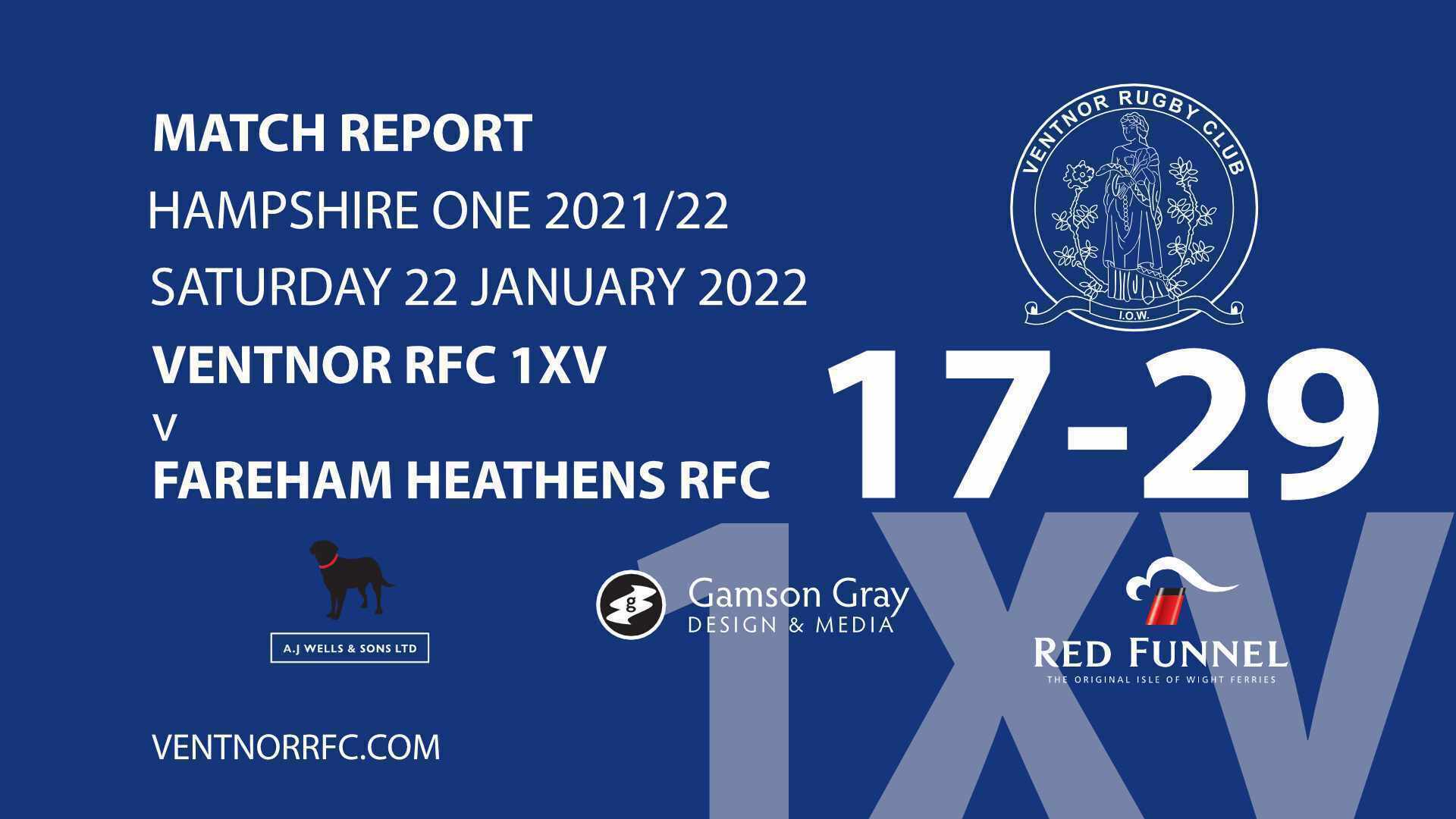 Ventnor’s preparation for this game was disrupted by the late withdrawal of Ben Savill which meant the Islanders started the game with Chris Hill in the unaccustomed position of hooker whilst skipper Lewis Jones slotted in at tighthead prop.

Fareham Heathens RFC went on the attack from the first whistle and Ventnor did well to withstand the onslaught with the hard-tackling of Joe Coghlan and Dean Magnurson prominent. The large crowd at Watcombe feared the worst as – due to the late changes – the usually reliable scrum and lineout were both misfiring meaning the home team saw little ball and were constantly on the back foot.

So it was completely against the run of play when winger Ed Blake somehow stripped the ball in a tackle, juggled, regathered and raced from his own twenty-two to score an excellent individual try.

So it was completely against the run of play when winger Ed Blake somehow stripped the ball in a tackle, juggled, regathered and raced from his own twenty-two to score an excellent individual try.

By this time Tristan Price had arrived to replace Hill thus providing a more familiar front row and Ventnor began to establish a foothold in the game but were still under pressure from the hard-running Fareham Heathens forwards who were expertly marshalled by their half-backs and it was visitors who scored next to take the lead with a converted try of their own.

The game began to swing Ventnor’s way with waves of attacks and a kick ahead that resulted in a twenty-two drop out to Fareham. The powerful Dan Bell caught the ball and swept through the first lines of defence to be stopped just short of the line. From quickly recycled ball, Louis Malkin swung the ball right where a combination of Calvin Edwards and Blake put the outstanding Jake Babington in for a try.

Fareham Heathens increased the pressure and, with some mistakes and penalties from the home team, managed two quick tries both from short range after some powerful drives from their well- drilled forwards.

With the score at 10 – 17 to the visitors, the game appeared to be turning their way especially when Sam Lines was yellow-carded for an attempted interception that the referee deemed to be a ‘slap down’. Ventnor’s tryline defence was immense at this stage with Price, Adam Pratt and Andrew Teague putting their bodies on the line.

But things got worse when Coghlan was harshly yellow-carded for offside in the defensive line.

Now down to thirteen men, it now appeared only a matter of time before the dam broke but then the game was halted for a serious injury to one of the Fareham Heathen’s forwards that required the expert care of Ventnor’s physio Emily Faithfull assisted by Zoe Jones to tend to the unfortunate player. There was a long hiatus in play while an ambulance was called and there was a distinct possibility that the game could be abandoned.

Therefore it was to the great credit to both teams that, when the match eventually restarted, the intensity actually increased. Max Wheeler started attacking the midfield defence and Tom Crews, whose positioning was excellent throughout, began to return kick-aheads with interest.

… it was to the great credit to both teams that, when the match eventually restarted, the intensity actually increased. Max Wheeler started attacking the midfield defence and Tom Crews, whose positioning was excellent throughout, began to return kick-aheads with interest.

In their desperation to defend, Edwards was tip-tackled resulting in a yellow card for a Fareham Heathen player, but it was the visitors who scored again to extend the lead to 10 – 22 when they, for once, spread the ball and scored wide out despite some desperate last-ditch tackling by Louis Wyatt.

Ventnor again responded when Blake repeated his first half magic with another breakaway for a try that Crews converted.

The game was now in the balance but Ventnor were being hampered by receiving the rough end of the referee’s whistle especially when an exquisite kick from Lines was deemed out on the full.

Lewy Morton – returning after injury – came on to replace the ubiquitous Coghlan and immediately showed well with powerful tackling and one outstanding turnover.

However, it was Fareham Heathens who ran out the winners with a final try to take a victory that they deserved through the consistency of their pressure game whereas Ventnor tended to blow hot and cold at times.

There was plenty to admire in both teams and coaches Fergus Kenny and Clive Cardwell-Hill witnessed the continuing improvement in their charges who gave their all despite the disruptions before and during the game. As a unit, their commitment in defence cannot be faulted but there is still work to do in the decision-making process in attack.

The A J Wells Man of the Match: Louis Wyatt

The Red Funnel Moment of the Match: Tristan “Beast” Price

Ventnor RFC would like to thank their match sponsors, namely:

Ventnor RFC 1XV remain seventh in the Hampshire One Table 2021/22 season, with 32 points after playing 14 games this season.

Ventnor RFC 2XV’s away game to Kingsclere RFC was postponed.