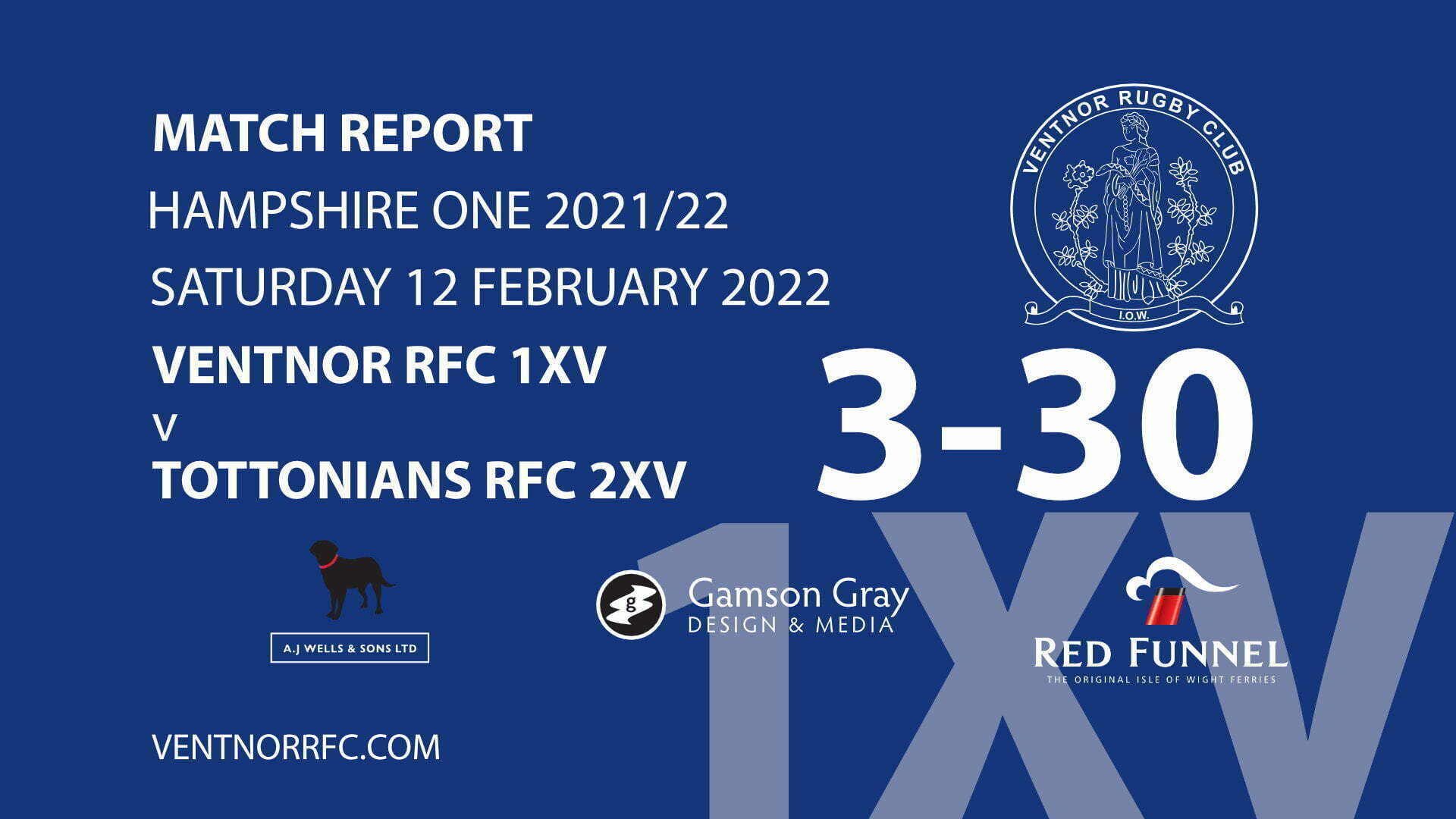 This was a hugely disappointing match from Ventnor’s point of view where nothing they tried seemed to work and the power and weight of the Tottonian RFC 2XV forwards made inroads into the heart of the hard-tackling home pack and provided quality ball which changed their point of attack and put pressure on an already creaking defensive line.

To compound these problems, Ventnor’s lineout – usually such a rich source of possession – broke down completely so that the team lived off scraps all game and could never get more than a couple of phases completed at any time.

Tottonians scored early when, for once, Ventnor’s tackling DID let them down but the home team then laid siege to the Tottonian line during which the work of Dan Bell and Lewis Jones helped to provide a ruck from which Ben Savill touched down on the line only to have the score chalked off by an unsighted referee.

With Tristan Price putting in another heroic eighty minute shift in the front row, Ventnor’s set scrum held its own as always and Bell was able to make ground off the base with great support from Joe Coghlan and Joel Walton in particular, but the ball rarely gave Sam Lines a chance to get his line moving and he often had to step inside and take the ball back into the heavy traffic.  When the ball did get out onto the wings, Ed Blake and – in particular – Jake Babington showed what could be possible with some storming runs.

Tottonians scored another close range try so that at half-time, Ventnor turned round 12 nil down and still well in the game. Lewy Morton came on for Coghlan who had tackled himself into the ground. Calvin Edwards replaced Louis Wyatt whose attacking threat had not been given a chance to shine but whose defence was once again top notch.

Ventnor’s play began to show promise. Jones led by example, tearing into the Tottonian defence but petty offences and basic mistakes began to count against the home team and another two tries plus a penalty were scored by the opposition whilst Ventnor only had a penalty from Tom Crews to show for their efforts.

In amongst this activity, Chris Hill, whose tackle count was off the charts, managed to get himself a yellow card for one infringement too many and the crowd at Watcombe began to show their displeasure towards a few of the opposition players who were happy to be a bit ‘careless’ where they put their studs and there were a few flair ups when Ventnor players took exception to this practice.

Crews had already had time on the sidelines in the first half having received this treatment to be replaced by Ross Harris with his unique blend of attitude, skill and energy. Unfortunately the referee missed these incidents but not a myriad of lesser infringements with a generosity that confused both sets of supporters!

Ventnor RFC 1XV now lie eighth in the Hampshire One league table, 28 points, third from bottom of the league after 15 games; with Isle of Wight RFC just below them in 9th, with 28 points, but they have two games in-hand.

Ventnor RFC 1XV have a long time to lick their wounds since Southampton Uni Hospitals RFC have withdrawn from the league meaning that Ventnor’s next match is not until 5th March when they play Fawley RFC at home.

The A J Wells Man of the Match: Jake Babington

The Red Funnel Moment of the Match: Chris Hill