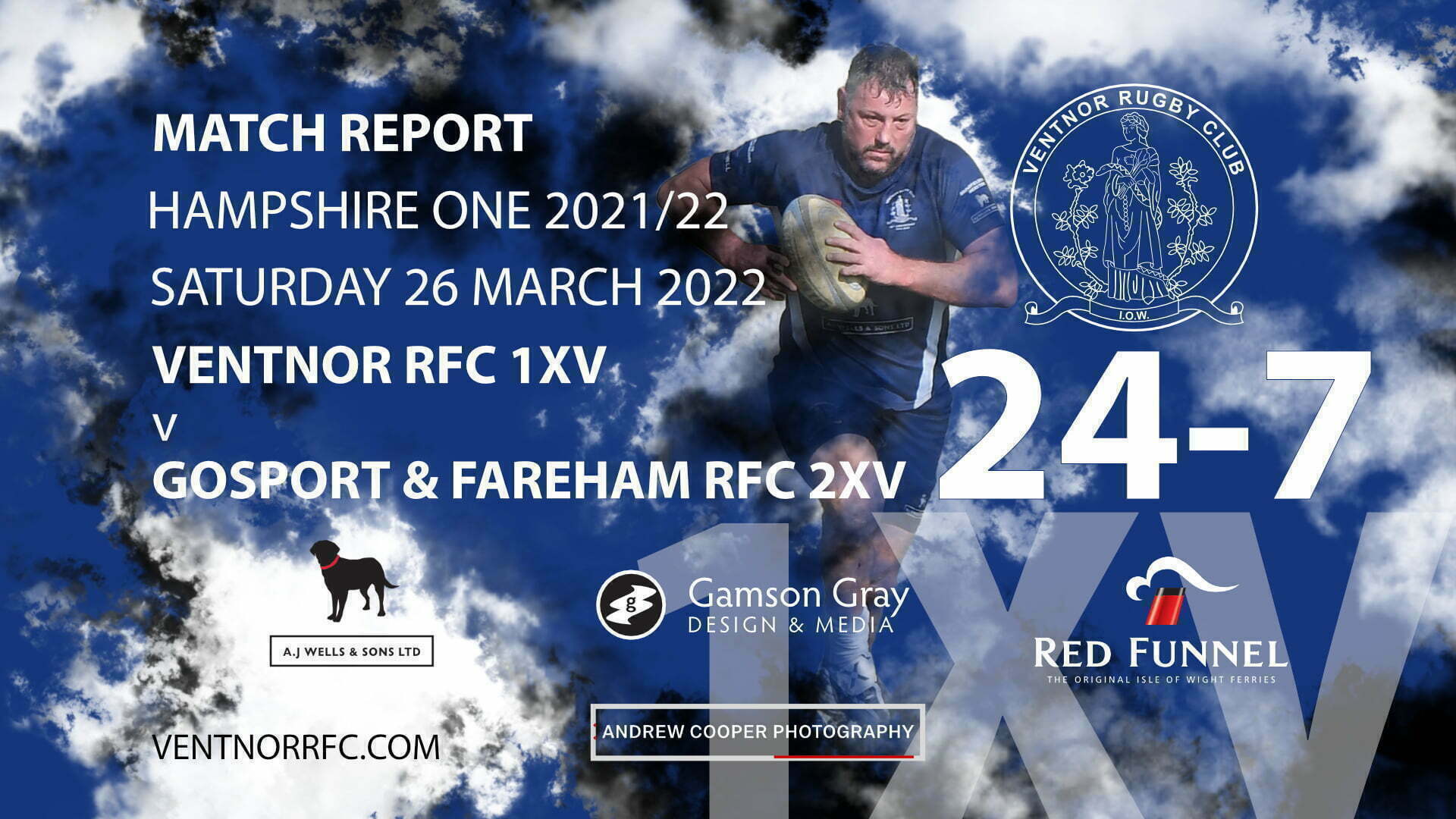 For the last home game of the 2021-22 season, Ventnor started this game against Gosport and Fareham RFC 2XV with an all-court display of pace and execution with Dan Bell catching the ball from the kick off and setting up Dean Magnurson for a big charge up field. The ball was recycled quickly and Chris Hill at scrum half was able to get quick ball out to Luke Butler whose long miss-pass gave Tom Crews a run to the line for an excellent try.

This was a great way to initiate Magnurson’s fiftieth birthday celebration and this remarkable servant to Ventnor Rugby Club was loudly cheered throughout the game.

The home team kept up their pressure with a performance that belied their recent form but they failed to match their early accuracy and several chances went begging.

Once again Ventnor’s scrum was on top with Ben Savill and the timeless Tristan Price putting pressure on their opposite numbers in the set while Joe Coghlan ruled the airways at the lineout once skipper Lewis Jones found his range. James Morley and Magnurson did a great deal of the heavy lifting, taking the ball up, working hard at the rucks and taking on the willing Gosport and Fareham RFC runners.

Dan Bell as ever was at his imperious best, picking up at the back of the scrum and taking the ball forward with great support from Savill, Jones and Lewis Morton who had a cracking game in attack and defence where his tackling statistics were off the scale.

Butler pulled the strings at flyhalf mixing up his game with short passes to put Sam Lines or Louis Wyatt through gaps, miss-passes to the wide channels to Ed Blake and Cory Turner or with raking kicks that turned the tiring Gosport and Fareham pack and kept his team on the front foot.

Meanwhile, at full back, Tom Crews continued his scoring spree by adding four penalties to his first half try.

The second half was a more even contest with Ventnor falling foul of the referee on occasion. Gosport and Fareham began to get a foothold in the game and began to put pressure on Ventnor’s scrum.

George Collett came on for Price to make his first team debut and acquitted himself well in tricky circumstances. Alex Morton – on for Turner – stopped a promising move with a devastating tackle but eventually the dam cracked and a try was scored to bring the score back to 17 – 7 with about twenty minutes to go.

However, Ventnor made no mistake this time and another long clearance from Butler set up a position from which Bell and Hill put the flyhalf through a gap and his pass found Harvey Wheeler who cantered over under the posts to put the game to bed!

Huge credit must go to Fergus Kenny and Clive Cardwell-Hill for the preparation of this team that was lacking a number of regulars but which demonstrated such commitment and skill in all phases of play.

The A J Wells Man of the Match: Dean Magnurson

The Red Funnel Moment of the Match: George Collett

Just final fixture for Ventnor RFC 1XV in the Hampshire One League 2021/22 season is an away local derby against Isle of Wight RFC 1XV on Saturday 2nd April 2022.

The final fixture for Ventnor RFC 2XV, in the Hampshire Four league of 2021-22 season is away against Chichester RFC 3rd XV, also on Saturday 2nd April 2022.

You’ve got just four days to book your tickets for the annual Ventnor RFC Dinner and Dance (Saturday 9th April at Watcombe 19:00 til 01:00).

Tickets can be purchased through this website with bookings closing on Thursday 31st March 2022.

Thanks to Isle of Wight rugby photographer Andrew Cooper Photography for the image montage.