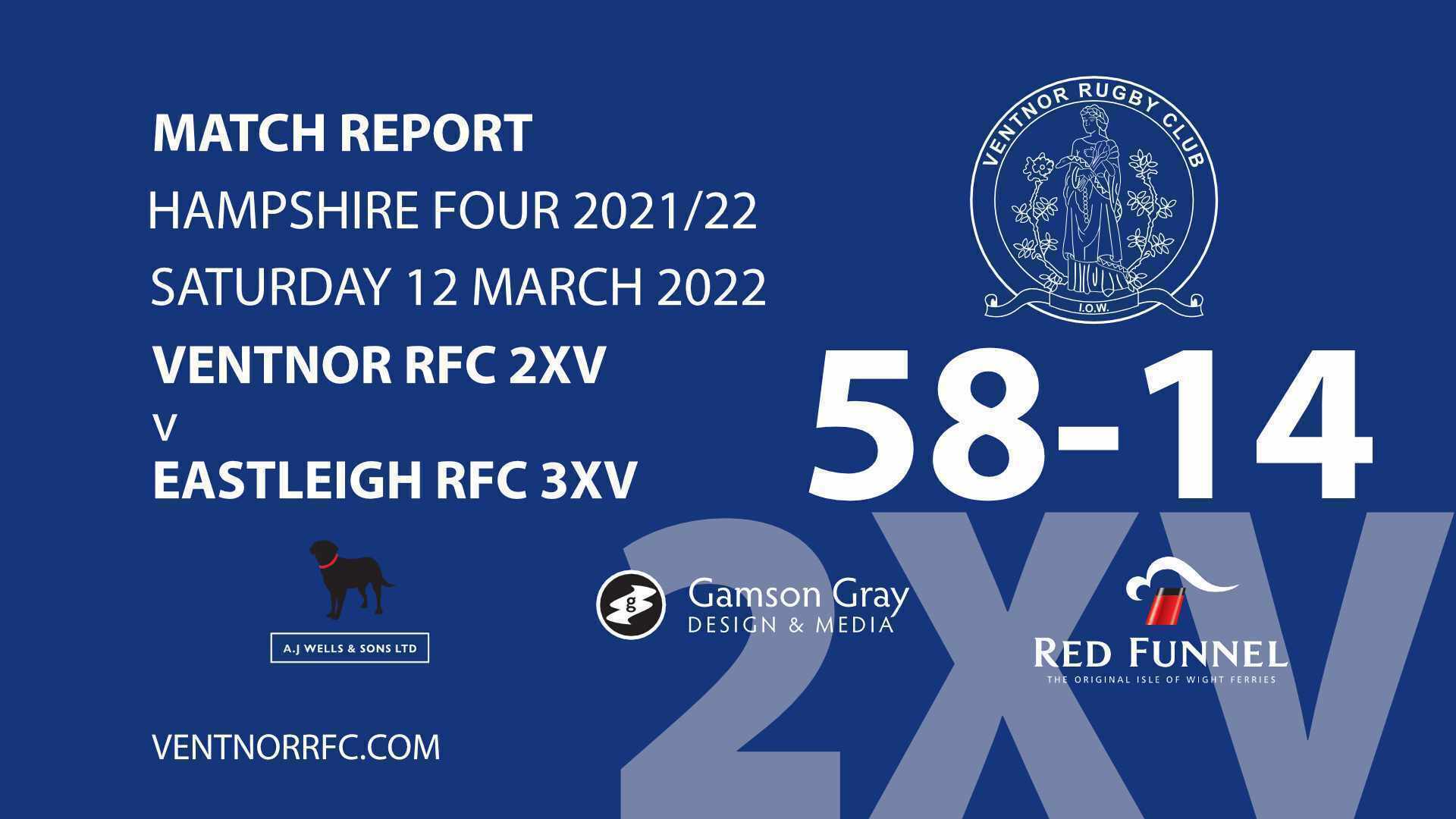 An immaculate pitch at a sunny Watcombe Bottom was the scene for an entertaining match in which Ventnor RFC 2XV‘s skipper Dean Magnurson was able to call on almost a full squad to face a sporting Eastleigh RFC 3rds side.

This surfeit of players allowed Ventnor to run a continual round of rolling substitutions – expertly handled by Stuart Babington – that eventually wore down the opposition and helped clinch a convincing win.

Ventnor opened the scoring when Tom Engelgardt chased his own kick ahead allowing Chris Hill to win a penalty from which quick work from Ross Harris set up a rampaging Charlie Magnurson to blast over the line.

Eastleigh RFC hit back almost immediately but it was Ventnor on the move again when Todd Riches broke through the middle only to tumble inches from the line.

The ruck was won and Oscar Fitzgerald put James Morley in for the try.

Gav Davis then got his name on the score sheet when Ed Blake chased a Riches kick and set the ball up for the powerful centre to touch down.

Again Eastleigh struck back to bring the score to 19 – 14 and it looked like a very even contest despite the fact that Ventnor’s scrum had got on top with debutant George Collett at prop proving to be the star of the show.

Additionally the line-out was working well with Ben Gough finding his jumpers well – in particular Aaron ‘Fred’ Newman and Joe Coghlan who provided a stream of clean ball.

Ventnor eventually began to stretch ahead with two tries from Max Wheeler either side of halftime. For the first, Tom Crews fielded a ball in his own half and made ground before Engelgardt, Blake and Cory Turner made space for Wheeler to break down the left wing and score.

For the second, it was much the same with Fitzgerald, Blake and Engelgardt providing the ammunition.

With Eastleigh beginning to tire, a drive by Collett allowed Harris to get his line moving and Riches and Dean Magnurson put Hill in for a try.

Then more great work by Turner gave Ed Blake the chance for his customary try before a classic pick up from Riches – now at number eight – provided Harris a straight run through under the posts in a move that rolled back the Watcombe clock.

Then Turner switched from provider to scorer for Ventnor’s ninth try with a sprint down the left wing before the excellent Crews finished off the scoring when – once again – Turner provided the final pass.

The game was played in great spirit throughout with a few Ventnor players swapping shirts to bolster up a tiring Eastleigh defence.

The match was expertly refereed by Clive Cardwell-Hill who demonstrated a light touch throughout that enhanced a great afternoon’s entertainment.

The A J Wells Man of the Match: George Collett

The Red Funnel Moment of the Match: Todd Riches

Don’t forget to book your tickets for the annual Ventnor RFC Dinner and Dance (Saturday 9th April at Watcombe 19:00 til 01:00). Tickets can be purchased through this website.

IOW Steak and Ale Pie
Made on the Isle of Wight, tender pieces of steak are cooked with vegetables and English ale, then wrapped in a flaky buttery crust.
Gurnard Mornay
Fillet of white fish served with a delicate bechamel infused with Gruyere cheese
Chestnut & Shallot Tatins
A delicate puff pastry tartlet with chestnuts and banana shallots, served with a mushroom & Madeira sauce
All served with creamed potatoes and seasonal vegetables
*

Cheese and Biscuits served with Grapes and Oat Biscuits