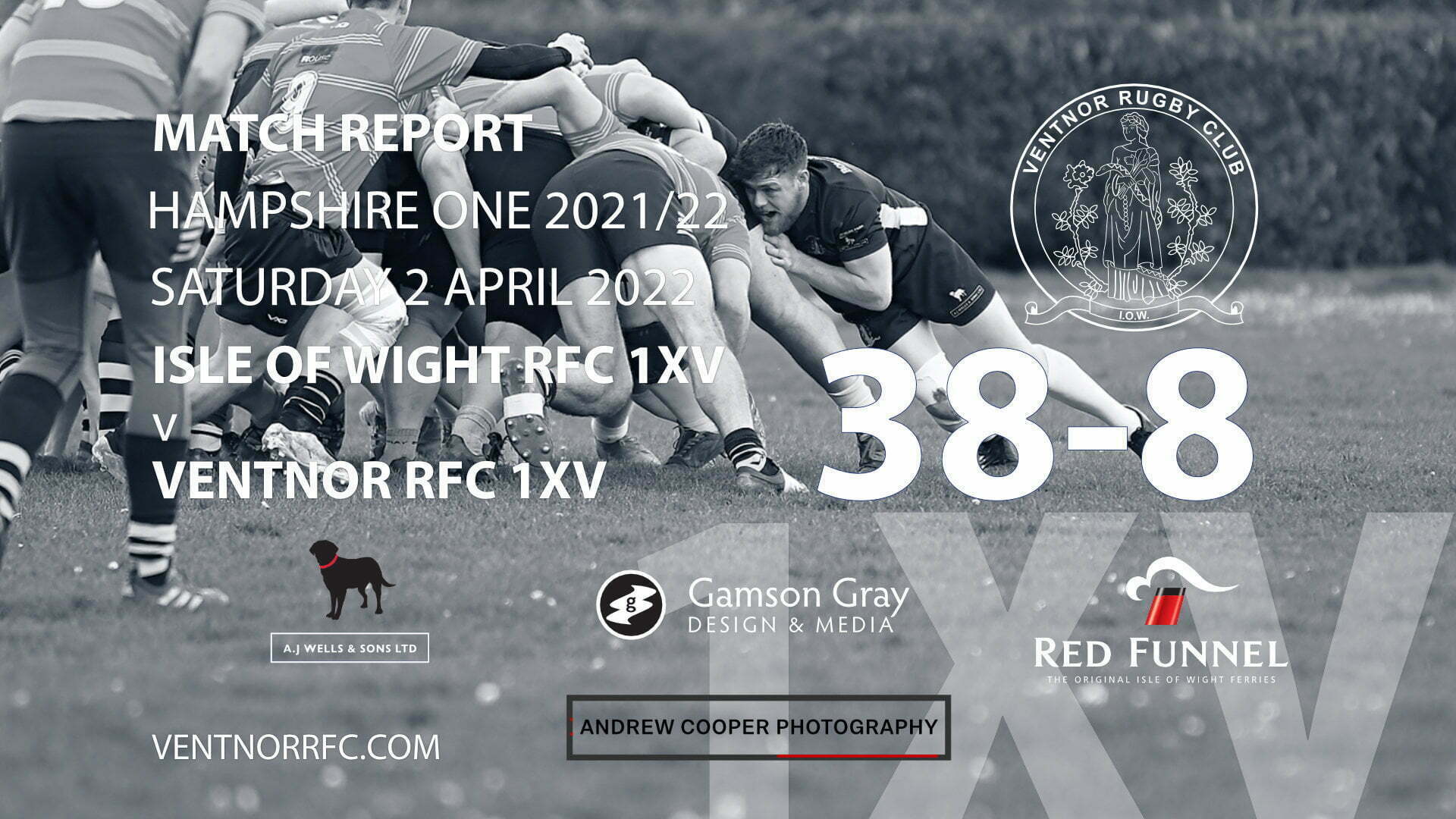 The silence in the dressing room at the end of the game compared to the jubilation in the home team’s, told you all you needed to know about the result of this end of season encounter. This was in stark contrast to Ventnor’s home win against Isle of Wight RFC 1XV at the start of the season.

Ventnor RFC 1XV were looking to build on their good work of the previous week in beating Gosport and Fareham RFC 2XV, and after a well attended training session in the week, went into the game full of confidence.

The big Isle of Wight RFC 1XV pack made their intentions clear from the first line-out, with a series of pick and drives eventually leading to a try out wide near the touch line. The conversion was successful, so 7-0 to Isle of Wight RFC.

From the kick-off, Ventnor gained a scrum from an Isle of Wight RFC knock on, but, in what was to become a frustrating pattern, a handling error allowed Isle of Wight RFC to regain the ball. Dan Bell came on as a blood sub for Chris Hill.

Harvey Wheeler went off, leaving Ventnor a man down, until a few minutes later, an Isle of Wight RFC player was yellow carded, evening up the numbers again. Harvey Wheeler returned to the wing.

Towards the end of the first half the very promising George Collett came on to replace Tristan Price. A successful penalty from Tom Crews and Ventnor started the 2nd half 12-3 down, with Max Wheeler on to replace Ed Blake.

Image: Andy Teague is shown in a tackle during the away game to Isle of Wight RFC

From the restart Ventnor scored probably the try of the game; with quick ball from Joe Coghlan at the line-out, a lovely flat pass from fly half Luke Butler found Hill, who ran a beautiful line to score under the posts. 19 – 8

Following a Ventnor scrum at the restart more quick ball saw the Ventnor backs threatening, but an intercepted pass almost led to an Isle of Wight try, prevented by an excellent tackle from Ed Blake, but at the subsequent ruck, Butler was yellow carded.

From 5m out the inevitable pick and drive resulted in another try for Isle of Wight : 24 – 8. Morley returned to substitute Andy Teague, who had done sterling work in the scrum. A dropout from the Ventnor try line again saw Ventnor unable to counteract the pick and drive: 31 – 8.

Teague’s rest was short lived as Hill had to leave the field due to injury, and Butler was restored from the sin bin.

With the Isle of Wight’s heavy pack tiring, Ventnor had opportunities to run the ball after some good work by the front five, but a series of handling errors or poor decisions led to them failing to capitalise on any of them.

The final nail in the coffin was when Ventnor were penalised for offside and quick ball through the hands from the line-out gave Isle of Wight RFC their final try.

Image: Lewy Morton – AJ Wells Man of the Match – in a scrum during the game.

Despite many good individual performances, Ventnor were unable to put together enough phases of play to consistently threaten the Isle of Wight RFC line. Either poor handling or poor decision making put an end to many promising attacks. A frustrating end to Ventnor’s season!!

The A J Wells Man of the Match: Lewy Morton

The Red Funnel Moment of the Match: Luke Butler and James Morley

Images by Isle of Wight rugby photographer Andrew Cooper Photography of this game will appear in the forthcoming Summer 2022 edition of the Ventnor RFC Magazine due for publication in June 2022.