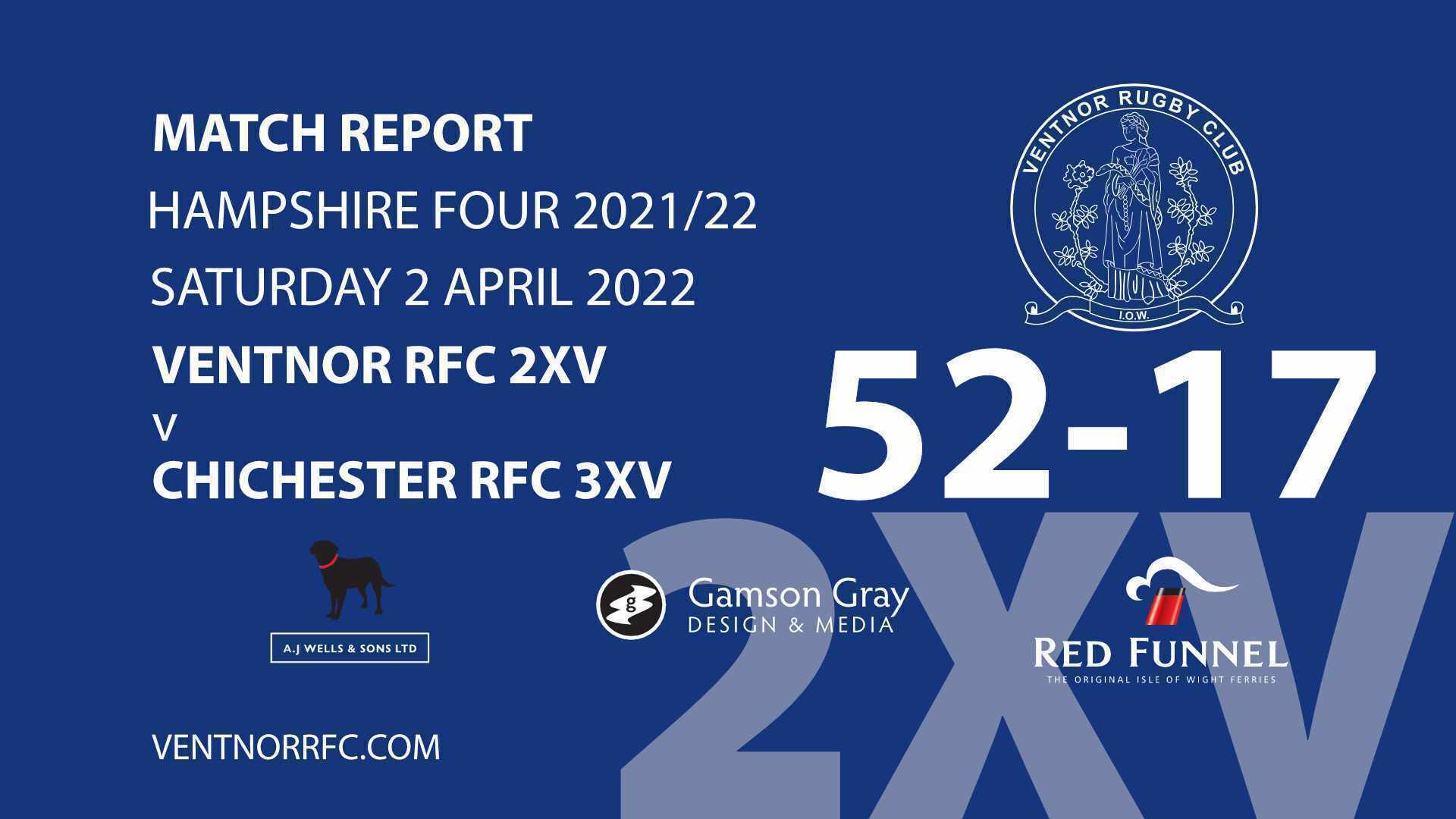 In the final game of the 2021-22 season for Ventnor RFC 2XV at Watcombe Ventnor 2nds welcomed a depleted Chichester RFC 3XV who sportingly travelled with twelve players.

In the spirit of second fifteen rugby, Ventnor evened up the teams by lending players and the game was played as a thirteen-a-side contest with lots of open running and full commitment from all.

Skipper Dean Magnurson expressed his gratitude to Tommo Engelgardt for his efforts to pull this team together and it was good to see so many ‘old faces’ turning out for this last league game of the season.

These included Gary Freeston whose last game for Ventnor had been against the Wasps Legends – Josh Lewsey, Andy Gomarsall, Kenny Logan et al – back in 2011.

The match kicked off with Ventnor putting on the early pressure but it was Chichester RFC who scored first with a break down the left.

Due to the lack of front row players, the scrums were uncontested throughout which resulted in clean ball for both teams and space to play attractive running rugby endorsed by the sympathetic refereeing of Elys Norman.

Straightaway Ventnor came back strongly with James Blake, Dean Magnurson and his son Charlie making ground allowing the ebullient Rosco Harris to set up Gary Freeston for a try. It was like he’d never been away! The Rev Warren Riches slotted the conversion to bring the scores level.

With the returning Louis Vanassche and Nathan Ricketts prominent, Ventnor were on the front foot and Ed Clarke put Harris away on the left and his one-handed offload gave Gareth Gough a chance to canter in for an excellent team try. Again the Rev converted.

Chichester hit back with a try of their own before Freeston swooped on an interception and ran in his second try. The Rev Riches converted again and Ventnor were 21 – 12 ahead. With halftime approaching, Aaron ‘Fred’ Newman took clean line out ball and Clarke and Gav Davis took the ball up to give Harris a run in under the posts.

Incredibly the Rev Riches stunned a post with his conversion attempt which resulted in him having to partake in a doubtful looking pint at the end of the match!

As the second half kicked off, Ventnor were rotating their substitutes and it was good to see Harry Colson back at Watcombe after missing the season with a knee injury sustained in a motocross incident.

Ventnor also welcomed Jack Rushton for a very promising debut. But, perhaps the most impressive of all, was the appearance on the field of Jac Stemmet who had just finished a gruelling charity run in aid of Mad-Aid in which he’d covered four miles every four hours for forty eight hours!

Chichester scored when the home side’s defence wavered but thereafter it was all Ventnor. Davis scored a great individual try which was then matched by his centre partner Wayne Williams.

Then, after powerful running from James Green, Nathan Ricketts got onto the end of a move continued by the hard work of Engelgardt and Newman. The final try was scored by Ed Clarke who had been outstanding throughout the game. In all the Rev Riches converted six tries.

At the final whistle Dean Magnurson and Tommo Engelgardt gathered the squad together and conducted an impromptu memorial service to the late Ventnor legend Mike Walker on the centreline. It was a poignant moment to end a great day in the sun at glorious Watcombe Bottom.

The AJ Wells Man of the Match: Gary Freeston

So ends the Hampshire League Division Four 2021-22 season for Ventnor RFC 2XV, ending the season in sixth (out of eleven teams) on 54 points.