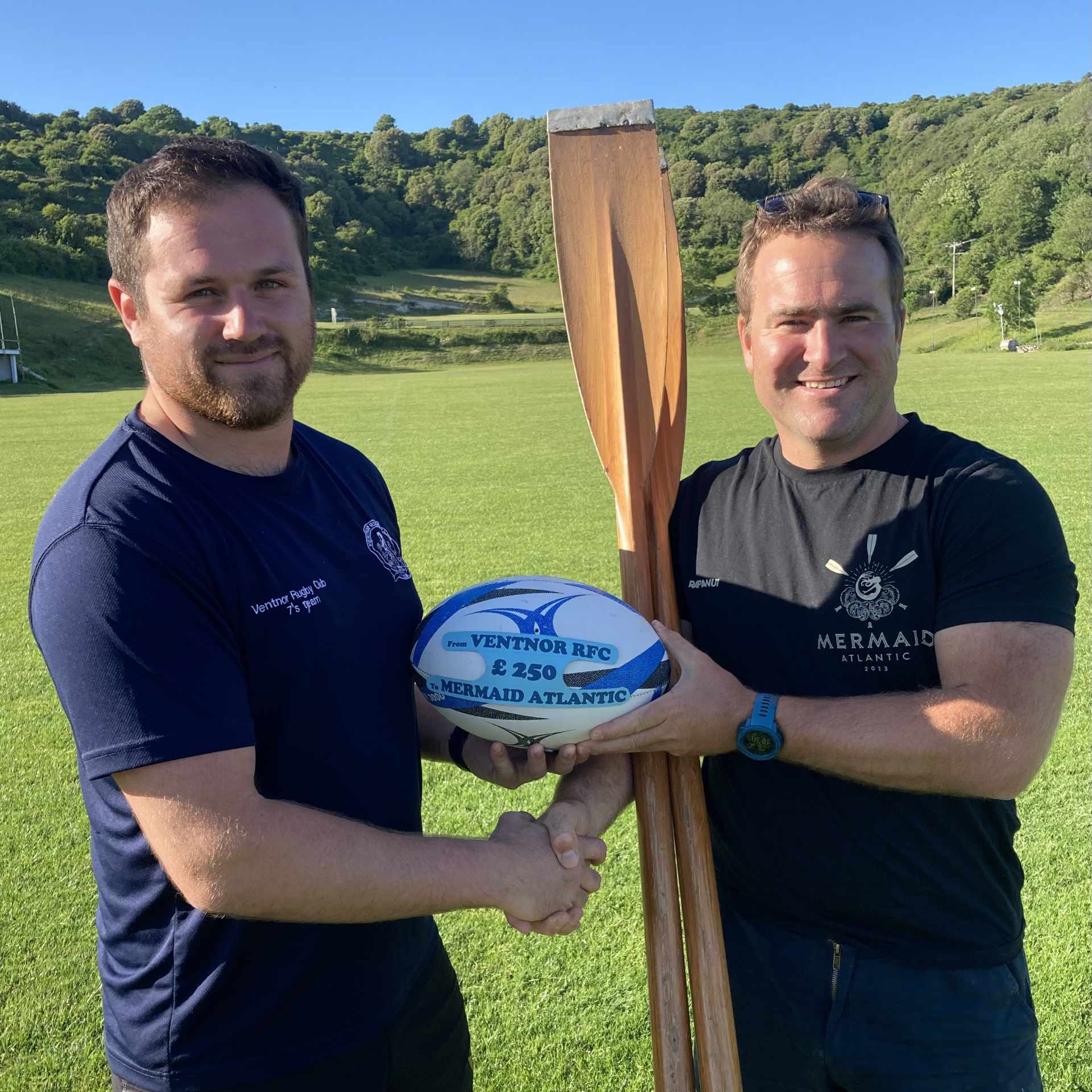 In a brief ceremony yesterday at Ventnor Rugby Club, the club’s Chairman Ed Blake presented a cheque for £250 to Paul Berry, of the Mermaid Atlantic who is completing in the Talisker Whisky Atlantic Rowing Challenge.

In December 2023, three friends from the Island will take on the challenge of a lifetime when they compete in the Talisker Whisky Challenge and race across the Atlantic Ocean in a rowing boat.

Under the banner of Mermaid Atlantic, Xavier Baker, Paul Berry and Chris Mannion are looking to beat the 35 day class record whilst raising money for several environmental charities: Surfers Against Sewage, The Seahorse Trust, Hampshire and Isle of Wight Wildlife Trust.

To support this amazing enterprise, Ventnor Rugby Club has donated £250 to the cause, from money raised when their clubhouse was used as a check-point and feeding station last month’s round-the-Island Isle of Wight Randonnee 2022 on Sunday 1st May cycling event.

The club’s chairman Ed Blake stated, “Paul Berry is a long-time player for Ventnor RFC and we applaud the Mermaid Atlantic project both for the adventure and for the charities that it supports. Paul has a past record of rowing achievement having raised over £9,000 for charity when he rowed single-handed round the island in less than sixteen hours in 2018”.

“On behalf of Xavier, Chris and myself, I would like to thank Ventnor RFC for the donation of £250 which qualifies them to have their name on the boat when we cross the Atlantic. It’s great to have the support of the club and it will motivate me when things get tough to see their crest on the side of the boat”.

.The annual race begins in early December, with up to 30 teams participating from around the world. The race structure brings together an environment where teams from across the globe gather in the race village San Sebastian in La Gomera, Canary Islands. The atmosphere is electric as people help each other prepare for the challenge of the mighty Atlantic Ocean. All with the same objective – to take on the unique experience of crossing an ocean in a rowing boat.’

‘Three friends, all alike in ambition, are undertaking the ultimate ocean encounter in 2023, The Talisker Whisky Atlantic Challenge. The mission is two-fold, firstly to communicate the detrimental effect of waste items on the ocean. Plastic is the biggest culprit, but many materials do not decompose, polluting the water, damaging ecosystems and threatening marine life.

The second is to raise awareness of the power of seagrass and the role it plays in combating the climate crisis. Home to many sea creatures and pivotal in the protection of shorelines, seagrass is the unsung hero of the ocean, not to mention a huge carbon sink, sequestering it 35 times faster than the rainforests. However, its survival is threatened by human intervention, including mooring anchors, buoys and pollution, to name a few.

Being mindful of the environmental impact of the race, the team are aiming to compete as a Net-Zero outfit. Through monitoring all actions and logistics, they will calculate and offset their carbon footprint through blue carbon credits, in which seagrass projects are included.’

The Isle of Wight Randonne 2022 fundraising

More than a thousand cyclists took advantage of the facilities and refreshments available at the club.

The group’s leader, Roly Toombs, would especially like to thank Morrisons in Lake for somehow producing an extra 700 bread rolls and 200 hot cross buns on Friday night!