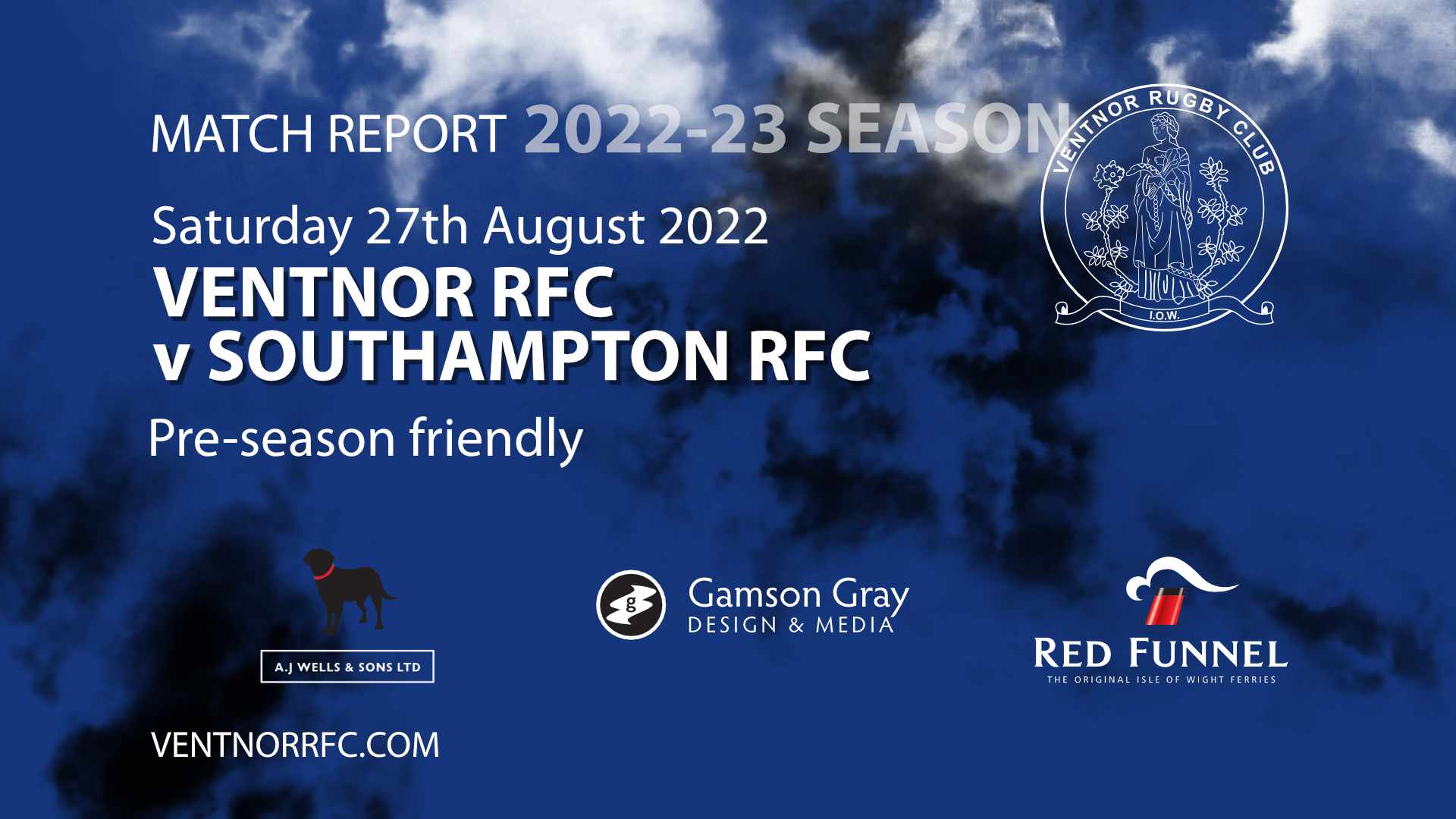 The long wait is over and rugby has returned to Watcombe Bottom!

With the pitch looking magnificent owing to the efforts of James Blake, there was much anticipation, with new head coach Jason Evans joining Fergus Kenny and Clive Cardwell-Hill and some new faces on the pitch with Ventnor RFC playing a pre-season friendly at Watcombe against Southampton RFC on Saturday 27th August.

A squad of twenty-three Ventnor RFC players turned out for this pre-season friendly, mirroring the good turnouts at pre-season training.

With four twenty-minute quarters planned, the aim was to give everyone plenty of game time and trial players in new positions.

Scrums were uncontested by mutual agreement, so the forwards – Ben Savill, skipper Jewy Jones, Adam Pratt Jnr, Andy Addison, Dean Magnurson, Lewy Morton and Harvey Wheeler for Ventnor – could save their energy and concentrate on lineouts and setting up good ball in loose play.

Despite the static platform of uncontested scrums, Ventnor’s back row of Magnurson, Wheeler and Morton made their presence felt with a number of powerful runs and quick second and third-phase ball, giving the three-quarters time and space to exploit the gaps in defence. A long kick and chase from Todd Riches resulted in a second try for Ed Blake. 10 -0

With the forwards tackling well, the Ventnor defence proved very solid, Chris Cardwell-Hill mopping up the few break-outs from Southampton.

Harvey Wheeler was unlucky to be held up over the try line after a passage of classic play by the forwards, but shortly after more quick ball gave George Finan plenty of space to score in the corner. 15 -0

This was soon followed by the first of two tries for Sam Lines, whose pace and footwork were much in evidence for the whole game. Picking up the ball in broken play, Lines touched down after four outrageous sidesteps. 20-0.

Sam’s second try was more of a stroll through a tired Southampton defence which allowed him too much space and his speed took him under the posts.

The final Ventnor try came from penalty under the posts with captain Jones ignoring a four to two overlap outside and choosing to scrum (no surprise there!). The decision was vindicated when Harvey Wheeler picked up from the base and clattered over for a well-deserved try.  30-0.

A consolation try for Southampton came after a mix up between winger and full-back as to who was making the tackle resulting in a fairly soft try.

Unfortunately, the game was brought to an early conclusion following a serious injury to one of the visitors. He was unlucky to be at the bottom of a pile of defenders trying to tackle George Finan in full flying Honey Monster mode, resulting in Ventnor’s’ expert medical assistance in the form of Emily Faithful and Zoe Jones being kept busy until the ambulance arrived; it later transpired that a broken hip was sustained by the Southampton player and we wish him well in his recovery.

In scoring six tries to one, Ventnor will be pleased with the result and that the effort of pre-season training, coupled with many of the things practiced, were put to good use on the pitch. The backs looked sharp in the speed and accuracy of their passing and the forwards secured good ball from scrum and lineout and the whole team carried the ball forward well and tackled strongly in defence.

The coaches will not be complacent, however, and will look to build on the games’ performance at training this week before the start of league action on Saturday when Ventnor RFC 1XV will welcome Havant RFC 3rd XV to Watcombe Bottom, with kick-off at 3pm.

Preceding the opening season game will be The John Adams Memorial Match with kick-off at 1.15pm.

There’ll be more details about this event next week. Meanwhile keep that date free because it’ll be a great day to honour a great servant of Ventnor RFC.