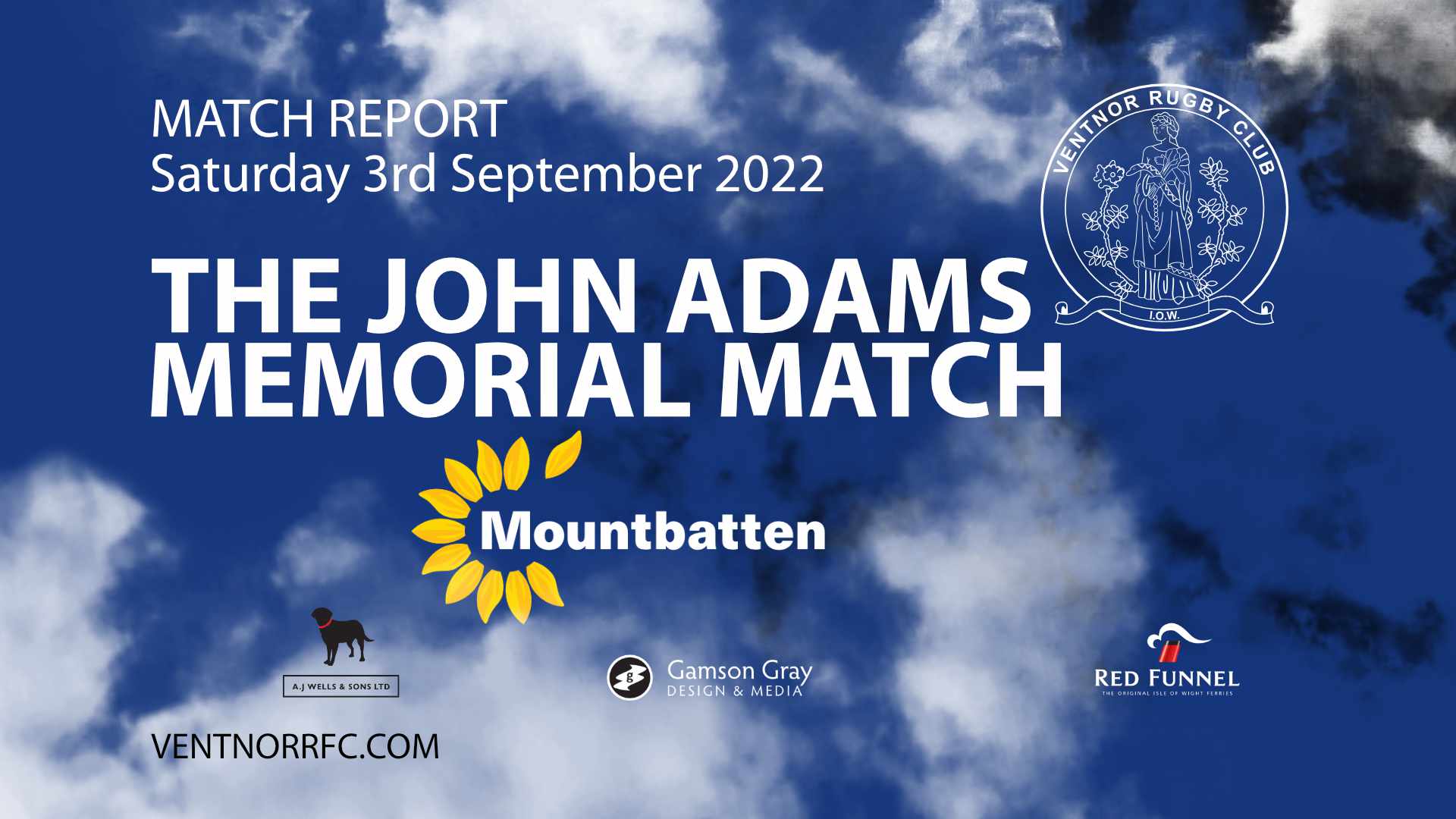 What a Day!  The response to The John Adams Memorial Match, Saturday 3rd September 2022, took the club completely by surprise and the numbers that showed up from the very get-go was a demonstration – if any was needed – of the high regard in which John was held – not just by the members and friends of Ventnor RFC, but in the wider Island rugby community which was represented at the highest level by Sandown and Shanklin RFC and the Isle of Wight RFC clubs.

Events commenced with a welcoming drink from John’s family – Jeannette, George, Diane, Lois and Andy – and with some wonderful and emotional words about John from George and Stuart Babington.

The Memorial Match kicked off promptly at 1:15 with Ventnor’s squad resplendent in their new kit sponsored by Wight Shipyards.

Michael Cooper‘s Sandown & Shanklin RFC and Isle of Wight RFC combined Barbarians were soon on top with the midfield trio of Gary Warfield, Cooper and Rob Newton asking all sorts of questions and the Babas had soon scored three converted tries before halftime.

But it all turned round in the second half when Ventnor came back strongly with tries from James Green and Fred Fairman.

Notable aspects of the game were guest appearances from George Creighton and Ben Cooper from our round-ball friends at Ventnor Football Club and the remarkable sight of Nigel Malkin swapping his referee’s whistle for the hooker’s shirt whilst a bemused Fergus Kenny took over the officiating!  The result was a deserved win for the Babas 21 – 14 after a competitive game played in great spirit and no little skill.

Dan Greaves very deservedly took the A J Wells Man of the Match award whilst Tommy Engelgardt received the Red Funnel Moment of the Match award for swapping his sandals for boots and having a run out when he had sworn he wouldn’t!

The Ventnor Squad for the John Adams Memorial Match

You can still donate to the appeal with all proceeds are going to The Earl Mountbatten Hospice who cared for John.

Following the John Adams Memorial Match was the Ventnor RFC 1XV‘s first of the Counties 3 Hampshire game, of the 2022-23 season.

After the games, Warren Riches (The Rev) and Stuart Babington ran the raffle and a hilarious auction that raised thousands of pounds towards the Earl Mountbatten Hospice. The highest value item bid for was a signed Bath RFC shirt while many other lots went for well over £100.

Also thanks to Jeannette, Lois, Diane and Maggie for running the cake and Pimms stall and to the fabulous Mountbatten team who worked tirelessly all day.

Hats off also to Luke in Kirsty Newnhams’s burger van who somehow managed to feed 80 hungry players as well as a big crowd desperately trying to come down from the sugar-rush of the cake stall! Luke very generously handed a tidy sum to the Mountbatten team at the end of the day which was hugely appreciated.