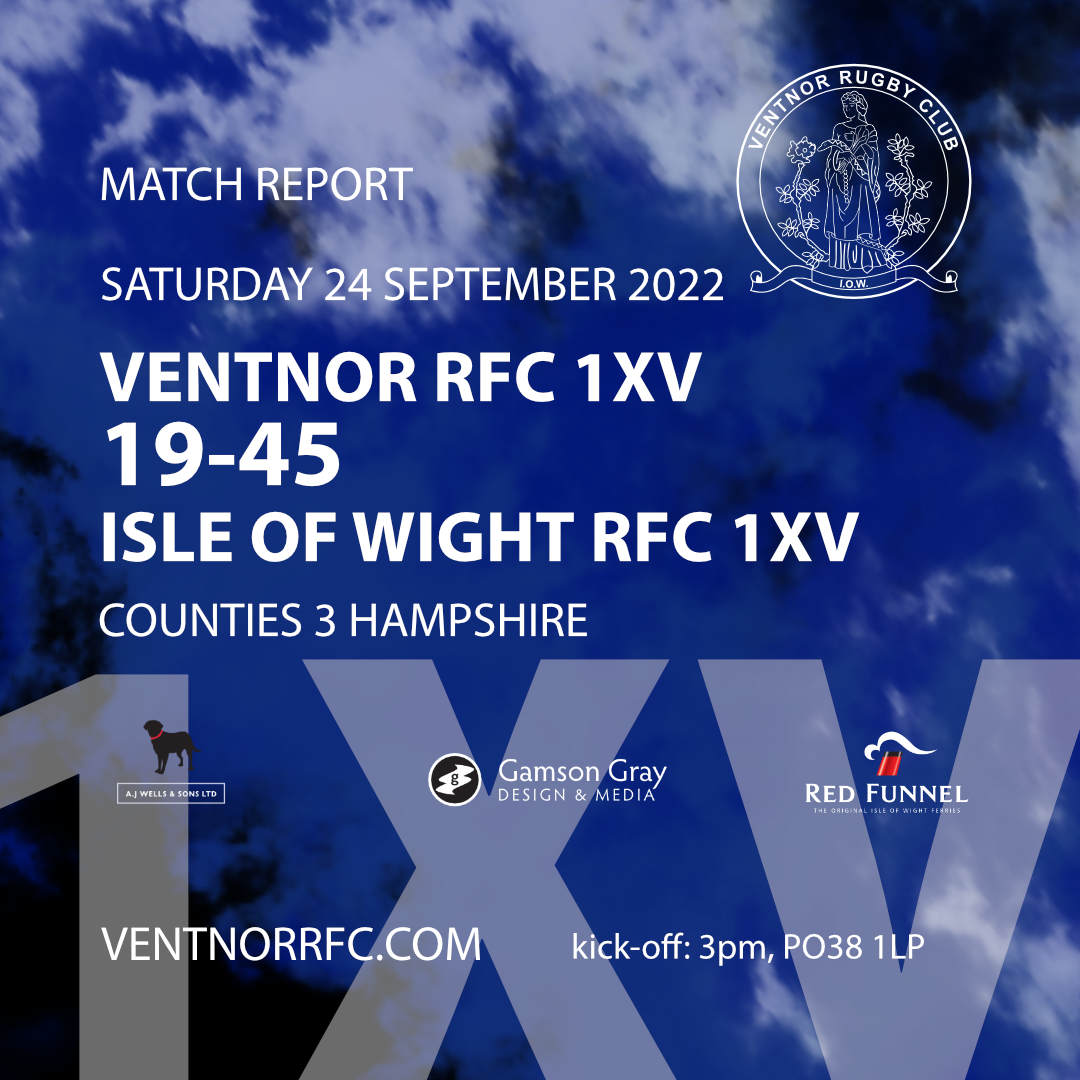 Despite a much-changed side, Ventnor RFC 1XV went into this match with some confidence after a good win against Portsmouth RFC 2nds the previous weekend. This was borne out in the first quarter of play where their early pressure led to two penalty opportunities which were both just missed.

However, the home side’s inability to hold onto the ball led to an Isle of Wight RFC 1XV’s breakout which was only slowed by a brilliant try-saving tackle by the returning Louis Wyatt.

However, the visitor’s efficiency in the red-zone was exemplary throughout and they scored two tries in quick succession which seemed to knock Ventnor’s belief for a time and it took a couple of quick pick and goes from James Green and the excellent Andy Teague to set up a position for skipper Lewis Jones to attack the Isle of Wight line from twenty metres out.

His momentum seemed to have been stopped but he stepped out of the tackle and crashed over to bring the score back to 5 – 12 and it appeared that the game was back in the balance.

However a lack of concentration and a complete failure of first-up tackling led to a great individual try by the Island’s no 8 which was quickly followed up by two more which meant, as half-time approached, Ventnor were in desperate need of a score to bring them back into the game. Chances were created but lack of composure and – at one point – a disregard of an overlap saw the half end with the score 33 – 5 for the Isle of Wight.

It was obvious that Ventnor needed to score early in the second half and good work by Dean Magnurson, Louis Malkin and Sam Lines set up Ross Harris – on for the injured Oscar Fitzgerald – to dive over. Tom Crews, who himself had had to leave the field with a shoulder injury earlier in the game, slotted the conversion and there was a glimmer of hope.

This was enhanced by Ventnor’s general scrum dominance with Ben Savill, Jones and Adam Pratt showing well in the front row which led to a couple of penalties and their general efficiency in the line-out where Dan Bell was imperious.

However, Ventnor’s lack of composure meant that their inability to string phases together led to another breakout by the Island which resulted in another try and the game was gone.

Bell scored one of his characteristic tries from the base of the scrum but the game finished with yet another try by the Island which was converted to leave the final score at 45 – 19 to the visitors who took a very deserved win and, with it, the bragging rights until, at least, the teams meet again at Wootton on 17th December.

It was altogether a frustrating game for the home team in which the full potential of the wide players such as Ed Blake and the extremely promising Josh Braham was not exploited.

There were good performances all over the pitch – not least by Lewy Morton who never gave up in attack and defence but, like his teammates, he was guilty of careless ball retention in contact on occasion which meant that no continuity of pressure could be applied.

There is no doubt that there is enormous promise in this talented Ventnor side but it will take commitment to training to ensure it bears fruit.

At the start of the game, there was a minute’s silence to honour Steve Hall, a Ventnor patron, who died last week.

Ventnor RFC 2XV’s home game against Millbrook RFC 2XV was postponed due to lack of numbers.

Ventnor RFC 2XV do not have a fixture for next weekend.