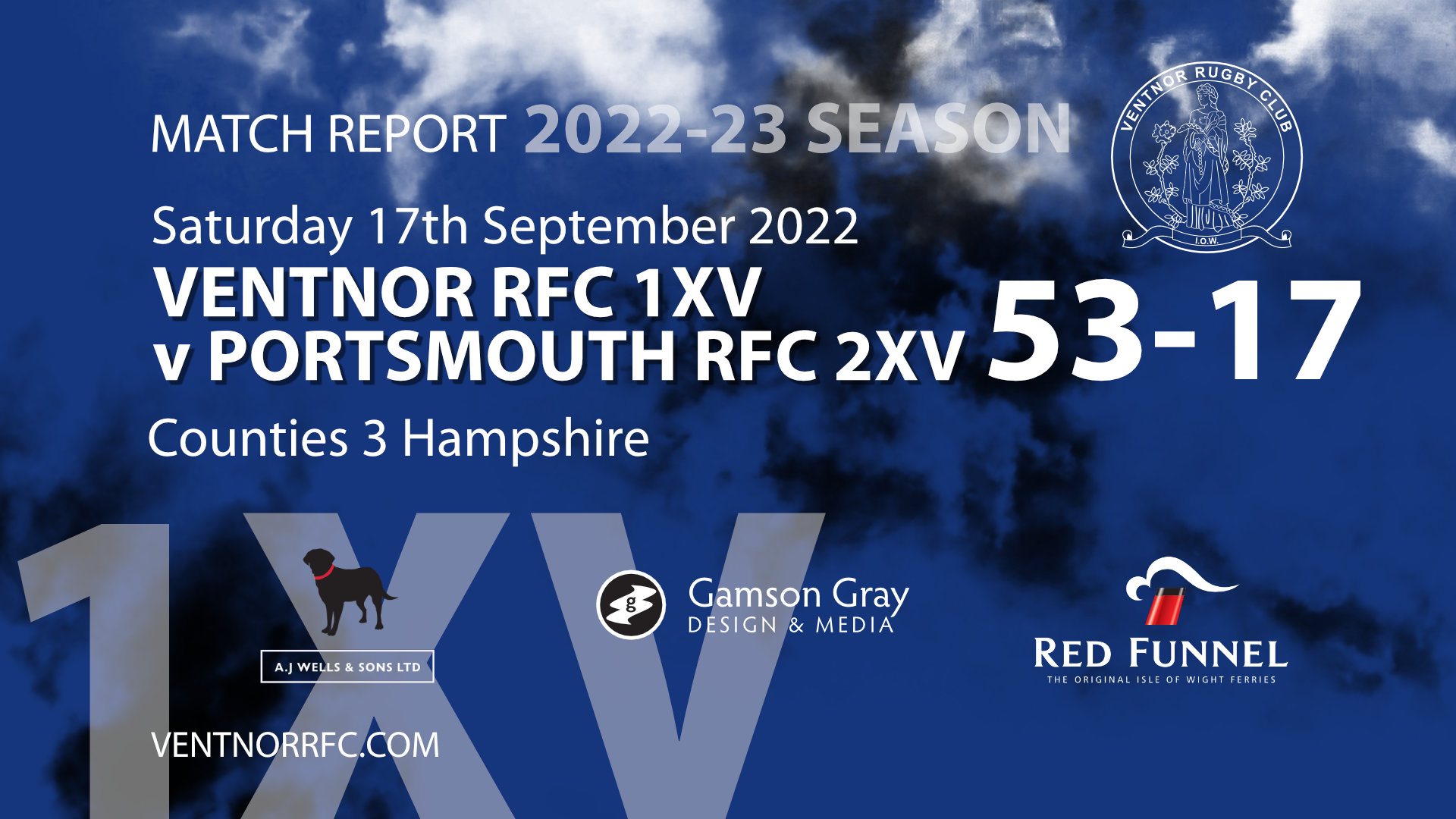 Ventnor returned to league action at Watcombe Bottom after the break following HM Queens Elizabeth II death with a minute’s silence before kick-off.

With excellent numbers and spirit at training, this game was an opportunity to put into practice many of the lessons from the training pitch. Players are now referring to the coach’s bible and key lessons namely: run straight, keep possession and take scoring opportunities in the opposition 22, all underpinned by patience!

As the scoreline suggests, all of these were very much in evidence. Their first foray into the Portsmouth RFC 2XV twenty-two allowed Thomas Crews to claim the first penalty and his boot was to keep substitute (and tee carrier) Cory Turner very busy all game.

The front five of Collett, Jones, Savill, Teague and Walton proved very efficient in the tight, allowing the back row of Morton (tackling everything in sight) Wheeler and Bell (both running hard with ball in hand) plenty of opportunities in the loose.

A five-metre scrum gave Bell the first of his two tries from a pick and go from the base of the scrum and – with Crews converting – Ventnor led 10-0. Portsmouth hit back with a try following a driving maul at a five-metre lineout to bring the score back to 10-5.

Ventnor hit straight back with a series of forward drives culminating in Morton setting up Bell for his second try, successfully converted by Crews. 17-5.

A head injury to one of the Portsmouth players and the lack of a front row replacement led to uncontested scrums, but the static platform still allowed half-backs, Malkin and Riches, to create opportunities for the three-quarter line of Crews, Lines, Finan, and Blake with Dan Greaves linking effectively from full-back.

Lines had a direct influence in the next three Ventnor tries with his passing and footwork setting up Blake and Wheeler and a dummy run allowing Riches to spin the ball wide to Crews who fed to Blake for his second.

During this spell, Ventnor conceded a try after failing to reform quickly enough at a Portsmouth penalty to bring the score to 36-12.

Two Ventnor substitutions brought James Green on to replace Walton and Josh Braham (on debut) replacing Wheeler whose excellent game was marred by fracturing his wrist. Braham moved to wing and Finan into the back row.

A couple of Ventnor indiscretions allowed Portsmouth into their twenty-two and their forwards took the opportunity to score. 36-17.

A Crews penalty made it 39-17 and then a long kick from Riches was gathered by the chasing Greaves who put Blake away to score his hat trick try, again converted by Crews 46-17.

The final Ventnor try came after a Portsmouth penalty kick failed to find touch and was fielded by Braham whose jinking run through the middle of the pitch put Crews into space to weave his way over for a try to cap his excellent all-round performance. Final score 53-17.

A good day for Ventnor and very pleasing for the coaches to see many of the things practiced at training put to use on the pitch in a game situation.

The team will be looking forward to their next fixture when they entertain local rivals Isle of Wight RFC 1XV at Watcombe Bottom next Saturday, 24th September 2022.

Ventnor RFC would like to thank their match sponsors for the day, namely: No 7 at Niton Post Office, Red Funnel Ferries, Steve Camm, The Smoking Lobster, The Blenheim, The Chequers Inn and The Kitchen at London House.