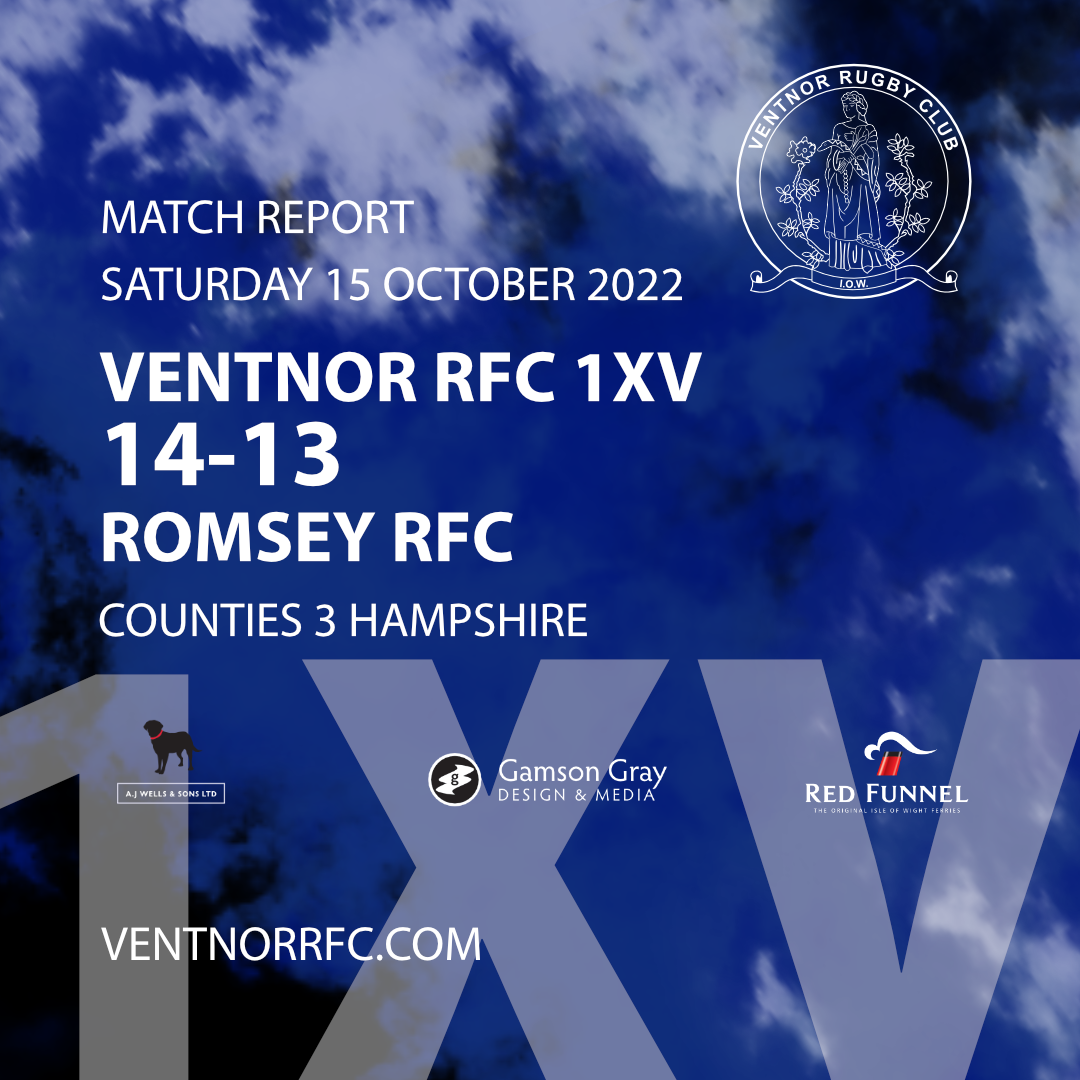 The game kicked off with a spell of intense pressure from Romsey RFC who camped on Ventnor’s line only to be resisted by stout defence around the ruck with Andy Addison, Joel Walton and Ben Savill to the fore. Eventually, the turnover was won and the ever-dependable Todd Riches thumped the ball to touch.

It was an even game after that with both sides enjoying periods of ascendancy. Ventnor RFC 1XV looked good in attack but were – once again – guilty of not looking after the ball on occasion and rushing things when in strong positions.

However, the home side received an early setback when Chris Hill, having his usual all-action game, let his enthusiasm get the better of him and received a yellow card having managed to get himself involved in a couple of melees.

Romsey slotted a penalty to take the lead and it took some time for Ventnor to get back on terms which they did gloriously when Jake Babington took the ball up from deep within his own half and made ground. The quick-silver Josh Braham carried the move on and sent a perfectly timed pass to Sam Lines in space. As the vociferous home crowd will tell you, for the last decade or more, when Lines has one man to beat, there has only ever been one result and the centre duly dotted the ball down over the line and Ventnor were in the lead 5 – 3.

Ventnor’s set piece was working well with George Collett and Adam Pratt dominant at scrum time and Hill ruling the airways in response to skipper Lewis Jones’ accurate throwing. The attacking patterns were good to watch with Max Wheeler prominent in carrying the ball into the opposition and Ed Blake, again at scrumhalf, mixing up the options. However, the excellent midfield defence of Romsey prevented the talents of George Finnan and Braham from being utilised despite another storming game by Tom Crews at the inside centre. What might have been was shown when Braham and Finnan combined for the latter to batter his way just short of the try line but once again the ball was lost and the threat blunted. As halftime approached a very rare lapse in the ruck defence allowed a break by a Romsey forward who just beat Babington to touch down for a converted try and the lead 5 – 10.

As the second half kicked off, Finnan came off to be replaced by Dan Greaves who did an outstanding job of cleaning up the Romsey kicking game and restoring calm to a match played at a frantic pace. Later in the half James Green and Jason Coltham – making his 1st XV debut – replaced Walton and Wheeler and both made serious inroads into the opposition to keep Romsey pegged back so that Crews was able to kick two penalties in response to one by Romsey so the match clock ticked away with the home side trailing by 11 – 13.

With minutes to go, great work by Green, Collett and Coltham resulted in a position where Ventnor won a penalty which – to the crowd at least – looked kickable. However Jones liked neither the angle nor the swirling wind and (as is his custom) called “scrum”. The forwards did their usual powerful job, Hill picked up and the ball was recycled always moving infield. Romsey infringed again and, this time, Tom Crews – with his usual insouciance – took two steps back and slotted the kick as the final whistle went for a deserved 14 – 13 win. Phew!

It was another great result for Ventnor from an incomplete performance where, as much as anything, their never-say-die ethic saw them triumph. Coaches Jason Evans, Fergus Kenny and Clive Cardwell-Hill can be delighted with their charges in the knowledge that there is so much more to come.