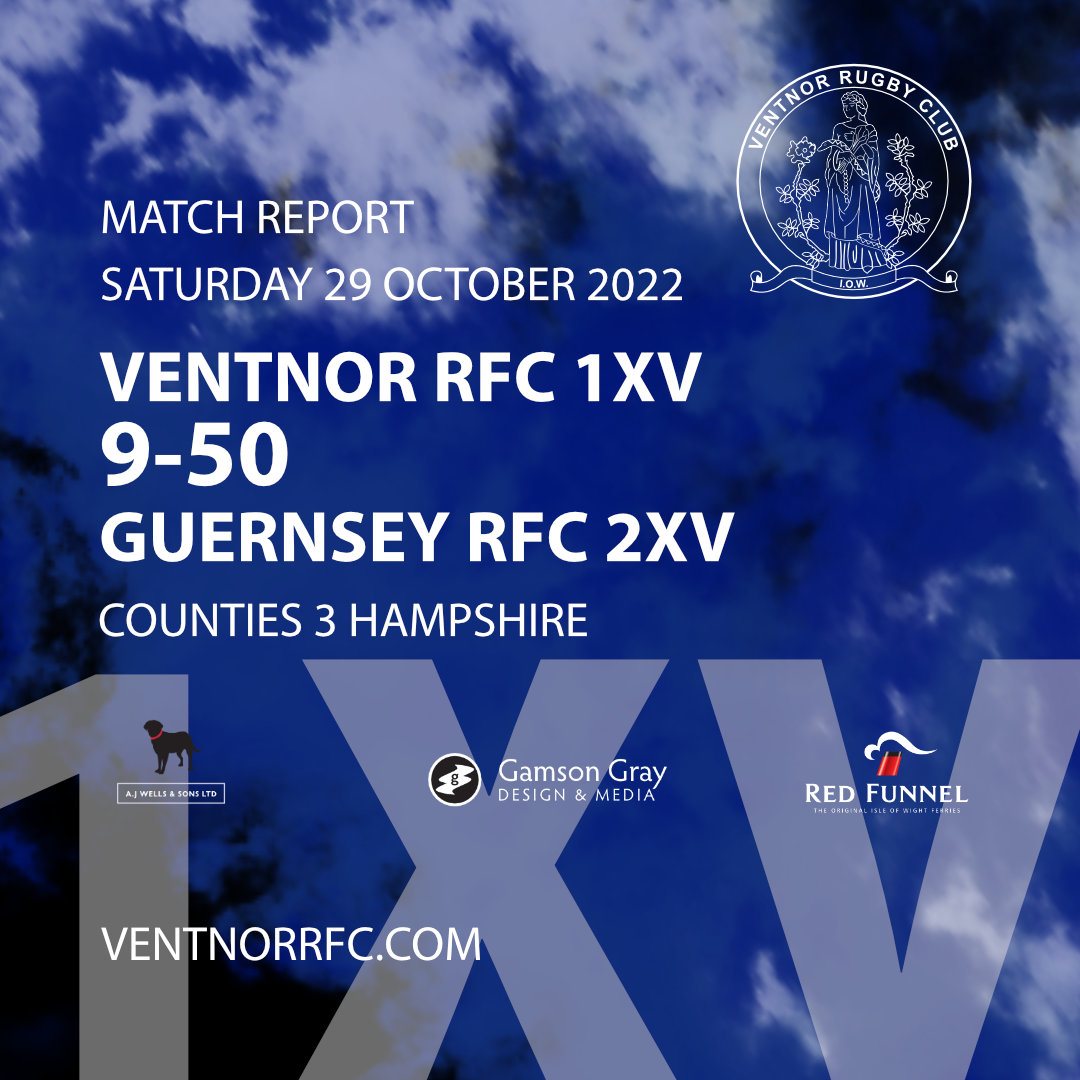 Forget the scoreline! This was a great performance by Ventnor RFC 1XV against the runaway league leaders Guernsey RFC 2XV who were averaging seventy points per game. So it was against expectation that, from the kick-off, it was Ventnor who took the game to the Channel Islanders, with a clever mix of running rugby backed up by close support work all orchestrated by Louis Malkin and Sam Lines at halfbacks.

Indeed it was a kick ahead by Lines that got the scoresheet rolling as the marauding Dan Bell and Joe Coghlan put pressure on the catcher and the reliable Tom Crews slotted the resultant penalty. Ventnor were straight back onto the front foot with Andy Teague claiming a brave turnover before taking the ball into the heart of the Guernsey defence with support from Joel Walton and the evergreen Dean Magnurson.

Lines magicked a sumptuous side-foot grubber kick that Lewis Jones gathered before barrelling forward. Guernsey went offside and Crews took the points. 6 – 0 to Ventnor. Definitely shaken, Guernsey began to weave their own patterns but they came up with a defence that just wouldn’t give up. Coghlan led the tackle count but every player did his part with Dan Greaves quite outstanding as the last man. Twice Lines stole the ball away when it looked like a score was inevitable and Greaves did the same in a bit of sleight of hand which left the sizeable crowd incredulous.

Crews had to leave the field having swallowed a wasp (!) and Jake Babington came on to provide his range of attack and determined defence. Crews returned but Andy Addison, who had been having a storming game at inside centre, succumbed to a calf injury so Babington stayed on.

As ever, the set piece was working well for Ventnor with the experienced front row of Ben Savill, skipper Jones and Adam Pratt taking the game to the opposition thus providing a solid platform for Bell’s charges from the back which always seemed to beat the first man. In addition, thanks to Jones’ accurate service, Bell and Coghlan provided good ball at the lineout with the latter stealing a few of Guernsey’s balls as well.

Eventually, the visitors got themselves on the scoreboard with a penalty when Ventnor were caught offside. They quickly followed this up with a converted try as Ventnor’s determined defence eventually cracked.

But the home team were undaunted and struck back after another strong kick-chase from Babington and Cory Turner. Crews provided the sting in the tail (sic) with his third penalty to tag the score back to 9 – 10. The clock was deep (very deep!) into injury time when Guernsey struck again and the whistle went for half-time with Ventnor undeservedly trailing by 9 -17.

The second half saw Guernsey pile on the pressure but Ventnor never eased up despite some enforced changes. Crews left the field for good with a shoulder injury and Magnurson – after a characteristic destructive display – also came off.

George Collett and Harry Colson entered the fray and both excelled in keeping the intensity at maximum. There were still some outstanding passages of play with Babington making ground whenever the ball came his way and Turner providing a tackle, release and turnover which left head coach Jason Evans purring.

Guernsey grabbed a couple of tries before Ventnor started playing fast and loose in pursuit of a deserved score which directly led to three more tries to the visitors as the Ventnor’s defensive wall was compromised.

At the final whistle Guernsey’s head coach was full of praise for Ventnor’s display which he described as the best his side had come up against this season. Despite the final result, the crowd left with massive pride for their team who promise so much for the games ahead.