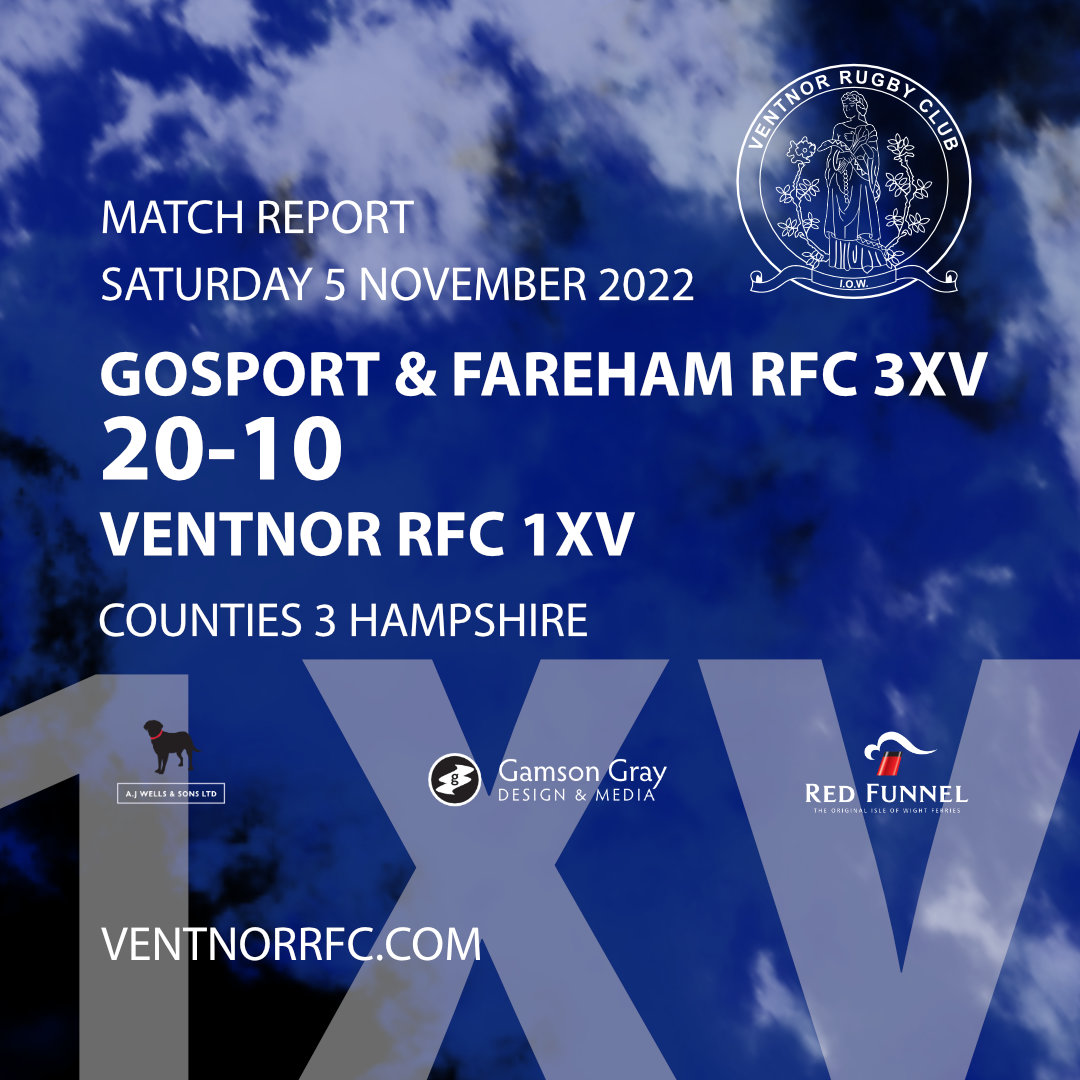 Ventnor’s troubled day began when their squad – already missing some key players through injury and unavailability – was hampered by a delayed Solent crossing and a ‘friendly fire’ injury to tight-head prop Tristan Price whose foot was damaged before kick-off!

With a gusting wind, driving rain and an uneven playing surface, it wasn’t the day for sparkling rugby so the sparse crowd settled in for an afternoon of forward-dominated rugby of two halves dictated by the elements.

Ventnor had the advantage in the first half and began well with Harry Colson, making a welcome return to the starting line-up, showing the way with some forceful drives. As ever the support play of Ben Savill, Joe Coghlan and George Collett was outstanding but the visitors suffered an early set back when George Finan received a yellow card when he was adjudged to have deliberately knocked the ball on when attempting an interception.

Gosport and Fareham kicked for position and drove the lineout to provide space for a blindside try – exactly where Finan would have been defending. This seemed to rattle the Islanders who took time to steady their game and a second try was scored in the opposite corner despite desperate defence from Lewy Morton and Cory Turner.

Skipper Lewis Jones marshalled his troops and the rest of the half was dominated by Ventnor but they met a defence which was uncompromising and which also played with an apparent disregard for the offside line making structured play behind the pack hazardous. Fergus Kenny was outstanding at flyhalf but the conditions didn’t suit the twinkling feet of Sam Lines (although he made impressive yards nonetheless).

With second row partners Andy Teague and Joel Walton leading the way, Ventnor built a platform and were awarded a penalty which – without the reliable Tom Crews – Ed Blake stepped up to take but it swirled wide. A second opportunity soon followed and Louis Malkin got the scoreboard rolling with a confident swing of the foot. Gosport & Fareham were now under the pump and one infringement too many led to a yellow card at which point – despite Price’s obvious discomfort – Ventnor took a heel against the head, Colson controlled the ball and Malkin was able to nip in under the posts. Malkin converted his try and it was all level as the whistle went for halftime. 10 – 10.

With the elements with them Gosport & Fareham set out their stall early. Namely kick, chase and defend. It was a very even game until the home team kicked an impressive long penalty to take the lead and Ventnor seemed to lose their way.

The Islanders were playing all the rugby but in the wrong areas of the pitch and, despite the hard running of Blake and Morton, failed to make inroads. In addition, the support was often hampered by the indiscriminate positioning of bodies in the ruck and the game became more fractious which didn’t help the clear thinking that was needed to build attacks. Again Jones, Walton and Teague were impressive going forward, the latter making a scintillating break which almost led to more but the home team’s defence was unstinting and their ability to put raking diagonal kicks behind Ventnor’s backline continually provided dividends.

Finan had a couple of bullocking runs but could never get past the last man and the game rarely got out of Ventnor’s half. James Blake replaced the heroic Price and immediately slotted in to continue the impressive work of Savill and Collett in the front row. However, with time running out, the home team won a penalty and kicked for position.

Miscommunication in the lineout defence led to a simple drive over try which was then converted and the game was over with a final score of 20 – 10 to Gosport and Fareham who won the second half without Ventnor troubling the scoreboard.