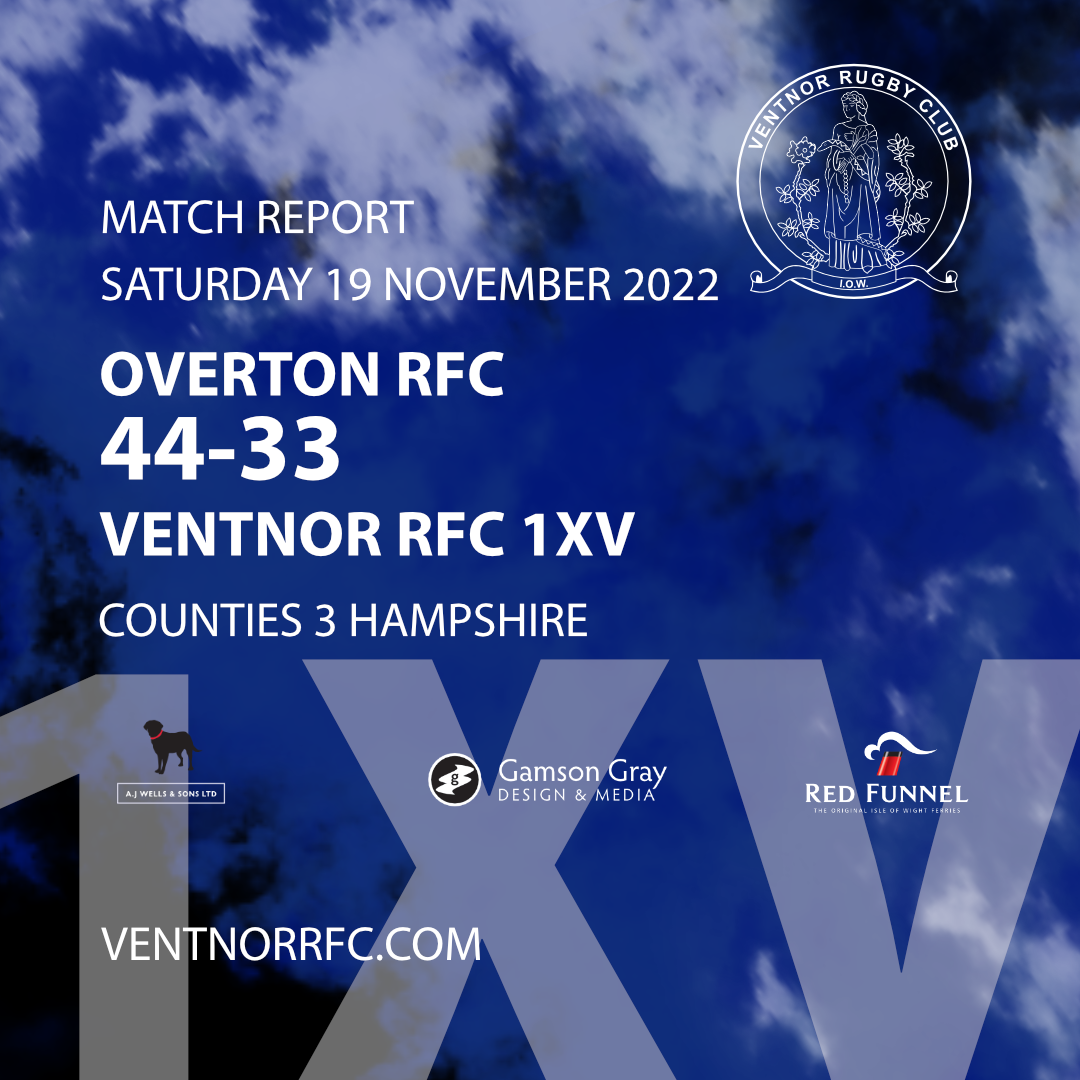 To honour this postponed fixture and without a number of first-team regulars due to unavailability and injury, Ventnor 1XV travelled in hope rather than expectation only to put up one of their best performances of the season. Overton RFC started strongly and their short passing game overpowered Ventnor for a couple of quick-fire tries to take a 12 – 0 lead.

However, the Islanders started to work their way into the game and won a couple of penalties which just went wide. Overton then struck again when Josh Braham was injured running out of defence and the ball went loose and the home team took quick advantage to extend their lead to 19 – 0.

Undaunted, Ventnor then built some pressure if their own with outstanding work by Andy Teague, Harry Colson and Cory Turner set up numerous phases that allowed Louis Malkin to put Dan Bell over in the corner. Malkin slotted the conversion and Ventnor were in the game. To endorse this, almost immediately Gary Ball turned over possession on his own twenty-two and smuggled it out to Ed Blake who was playing in the unaccustomed position of back-row forward.

Blake then demonstrated his three-quarter pace by outstripping the defence to touch down under the posts. Malkin converted and it was 19 – 14 with Ventnor in the ascendency. Alan Fox came in for the injured Braham and immediately came up with a couple of tenacious pieces of defence but even he couldn’t stop a try by Overton from a lineout controversially given when it appeared that the ball had gone into touch in the in-goal area. This put Ventnor back on their heels and Overton scored again after some uncharacteristic weak midfield defence to extend the home team’s lead to 29 – 14.

From the restart, great work by Bell led to a yellow card to an Overton player for an illegal in-the-air challenge. Ventnor took full advantage and Sam Lines lit up the place with a dazzling run through the centre of the defence before selflessly slipping an inside ball to Fox who dived in under the posts. Again Malkin converted. So at halftime, the score was 29 – 21.

As the second half kicked off, Fox damaged his shoulder in a ruck clear-out and Braham bravely came back on, at one point making a try-saving tackle on one leg. After that Fox and Braham swapped around again and both should take huge credit for ensuring Ventnor had fifteen on the pitch for the full eighty minutes.

Overton once again used their signature move and scored from a lineout maul but Ventnor wouldn’t lie down and George Finan left his mark on the home defence with a couple of bullocking runs that put Ventnor into midfield from where two quick tap penalties and some close passing put Ed Blake in for his second try. 34 – 26. Overton pressed again and took advantage of some mishandling under the high ball to pressure the Islander’s tryline.

Ben Soutter – on an impressive debut – put in some magnificent tackling to deny them but the try was scored which was followed by another when Ventnor failed to clear their lines. Back came Ventnor with some quick penalties and some great link work by Fergus Kenny that put Turner, Lines and Soutter into the heart of the Overton defence.

James Blake set up a powerful maul and Ed Blake took full advantage to crash over for his hat-trick try which Malkin converted to leave the final score at 44 – 33.

Gary Ball took the A J Wells man of the match award for a simply extraordinary performance in both attack and defence while Ben Soutter took the Red Funnel moment of the match for his defensive tackling and link play in a hugely promising debut for Ventnor.

Ventnor RFC 1XV‘s next fixture is scheduled on Saturday 26 Nov 2022 away to Winchester RFC 2XV in the Counties 3 Hampshire league 2022-23 game.