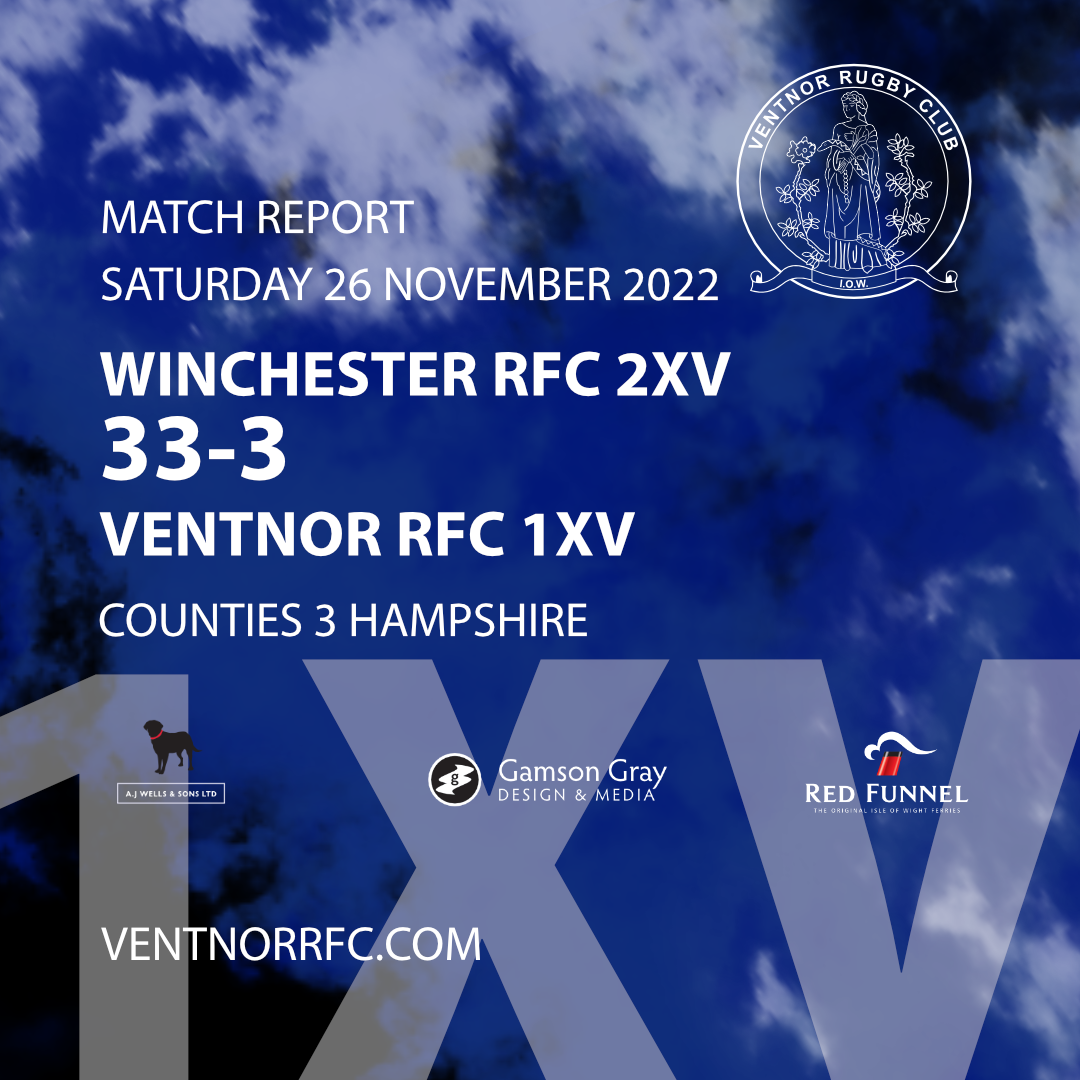 Once again Ventnor RFC 1XV were forced to travel light due to injuries and illness but put up a creditable performance against a high-flying Winchester RFC 2nd XV, currently lying second in the Counties 3 Hampshire league 2022/23.

The home team set out their store early on with some powerful set piece work which meant that Ventnor saw very little of the ball for the first twenty minutes of the game in which their defence was stretched to breaking point.

For once Ventnor’s scrum was coming under real pressure with George Collett struggling to get a foothold in the greasy surface against his massive opposite number and it took some wonderful close-in defence by the ageless Deano Magnurson, Joe Coghlan and Harry Colson to stem the tide. When Winchester went wide they found Ben Soutter and Sam Lines in no mood to be beaten and their aggressive tackling led to several handling errors.

Even then Ventnor’s problems persisted since they were winning little ball at the set-piece and that usually had them back in defensive mode and the dam eventually broke with a try after a scrum was pushed back over the line.  7 – 0 to Winchester.

From the kick off, great work by Dan Bell and Coghlan saw the latter in space only to be called back since it was deemed that the ball hadn’t crossed the 10 metre line.  It was then pointed out to the referee that the 10 metre line was misplaced by at least 5 metres so – at the very least – the kick should have been taken again.  But no, a scrum was awarded to the home team on the centre spot!

Ventnor’s issues were then exacerbated when Ben Savill was harshly yellow-carded for getting through a lineout maul but still the home team couldn’t find a way through with Chris Cardwell-Hill showing great speed to the ruck that claimed a couple of exceptional turnovers.

Coghlan came off while Savill was in the bin so that Tristan Price could take over in the front row and things improved in the set-piece and another piece of great defensive work by Dan Bell and Cardwell-Hill led to a clearance kick by Fergus Kenny that the opposition full-back chose to take on the volley rather than catch. His kick was caught by a team mate a good ten yards ahead of him and Ventnor all but stopped waiting for the obvious whistle which never came and Winchester won a penalty up the field to take the score to 10 – 0.

Despite these setbacks, Ventnor were coming into the game and Ed Blake was putting in some powerful runs from deep which were terrifying the home defence. In contrasting style, Lines was also making ground and the support provided by Andy Teague, Joel Walton and skipper Lewis Jones was ever-present allowing Louis Malkin some clean ball to get Kenny and his backline into the game.

Kenny was exceptional as a pivot and he worked his way through a repertoire of set moves which brought the ever-willing Soutter more into the game with some direct running.  However a hurried defensive clearance was picked off by Winchester and their right winger just managed to evade the covering Soutter and Bell to score in the corner.  18 – 0.

Ventnor went back on the attack and forced a penalty which Malkin slotted to bring the half-time score to 18 – 3.

The second half took up a familiar pattern with Ventnor doing lots of good things only to spoil them with hurried or unsympathetic passes or knock-ons. Once glaring example followed a exhilarating break out by Cardwell-Hill that set up a three-man overlap twenty metres out only for the chance to go as the ball hit the deck.

Price had stayed on after Savill had returned from his yellow card but now Magnurson had to leave the field with a recurring hip injury so Collett returned on the flank and put in a great shift with some intelligent support play and aggressive defence. Malkin then had to leave the field with a back injury so that Cardwell-Hill took over at scrum-half and typically announced himself by driving the opposition number eight back about ten metres!

However, these disruptions led to a couple more tries to Winchester, one of which was the last move of the game so that the final score was 36 – 3.

There’s no doubt that it was a deserved win for the home side but it did not tell the full story of the game in which Ventnor contributed so much.