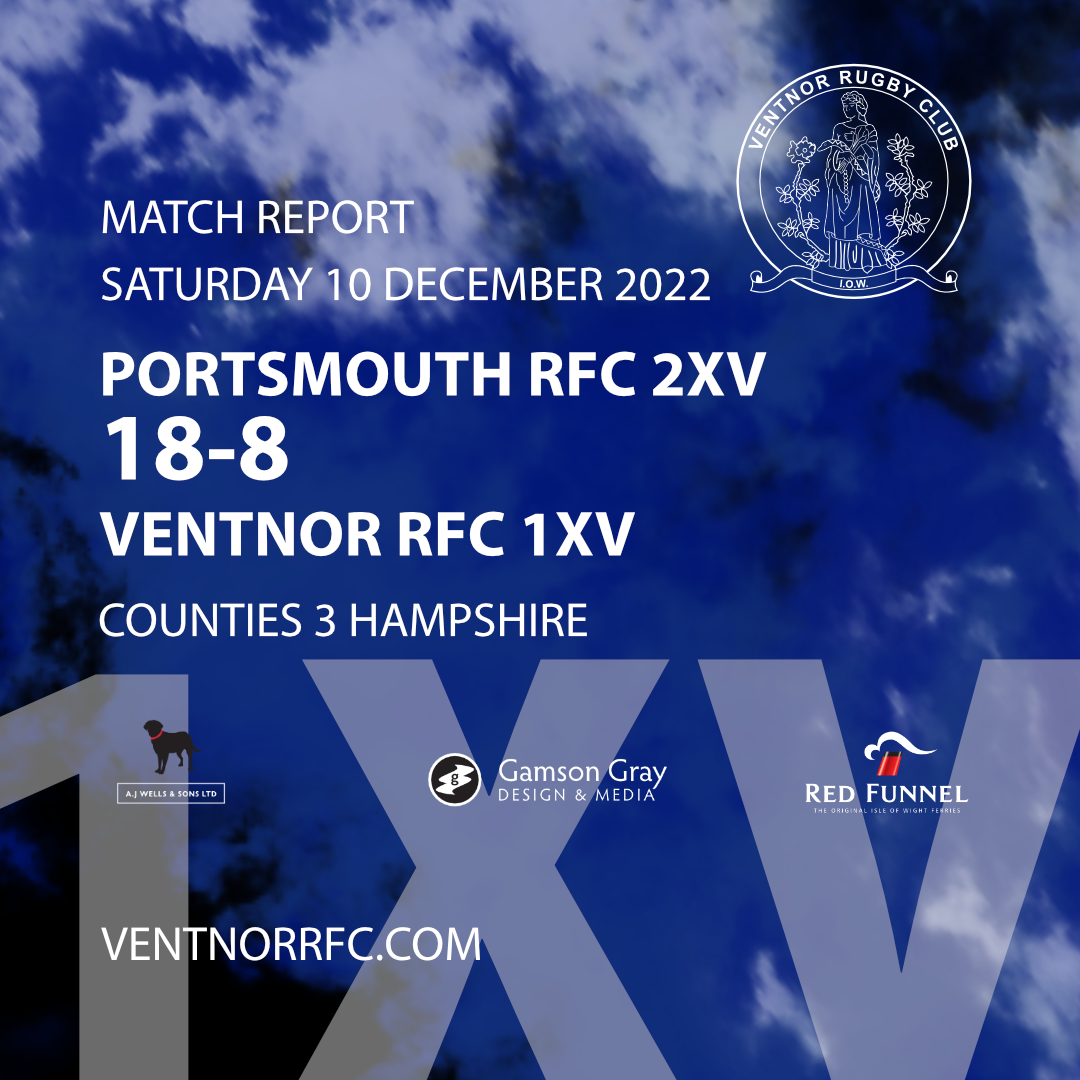 The scoreline bears witness to a game that was dominated by defence in which the commitment of both sides kept a typically large Watcombe crowd entertained despite the best efforts of the weather, when Ventnor 1st XV play Andover RFC 2XV, in the Counties 3 Hampshire League game.

Ventnor had some new combinations on view with Ed Blake filling in once more at scrumhalf and Jason Coltham making an excellent first impression at No 8.

It was also great to be able to welcome back Ben Cooper at outside centre who wound back the clock in his own inimitable pugnacious style in both attack and defence. He and Fred Fairman looked a formidable partnership in the centres and it can only be a matter of time when this Ventnor XV start to put together the bits and pieces of their game to turn their season round.

The game kicked off with Andover slightly on top whilst Ventnor sorted out their new combinations. The home side took to the boot early but without too much obvious gameplan and the excellent Andover fullback was able to bring the ball back with interest.

Once again the set piece came to Ventnor’s rescue with Ben Savill, skipper Lewis Jones and Adam Pratt getting on top at scrum time and Joe Coghlan and Lewy Morton ruling the skies at the lineout where Coghlan was able to steal several opposition balls.

The game became deadlocked with Andover playing it tight and attacking the fringes where they were met with the incredible tackling count of Morton and Coghlan in particular whilst Andy Teague managed to get over the ball on several occasions to create turnovers from which Harry Colson, Jones and Pratt were able to launch their own charges.

Blake and Fergus Kenny tried to play a more expansive game using Fairman and Cooper on the crash but it was a pity that Jake Babington and Ben Soutter were not given chances to challenge the Andover defence wide out. Babington’s most notable part in the game was an incredible bit of cover defence which stopped a certain try after a rare Andover line break in which the Ventnor winger sprinted across from the opposite side of the pitch to both make the tackle and dislodge the ball.

The turning point in the game came when Blake kicked ahead, chased and then caught the Andover receiver with a tackle that was deemed high by the referee even though the opposition player was falling as he took the ball.

Blake received a yellow card and Andover eventually took advantage with a line-out driving maul that made ground. In the melee the ball went to ground but was not spotted and an Andover forward was able to pick up and break through the blindside cover to score as the halftime whistle blew.

Critically this was the only score of the game as the second half became of stalemate with both sides working hard to make ground. Again Ventnor showed more ambition with Sam Lines demonstrating his silky running skills from full-back and Jones taking the game to the opposition with some mighty charges.

However, the home side were unable to sustain any attacking pressure through a characteristic lack of continuity and an inability to look after the ball at critical moments. It didn’t help that the game was getting a touch fractious and the referee was choosing to let a few things go in order to maintain the flow.

A massive positive for Ventnor was the debut of Dan Lythgoe at prop who came on for Savill and showed real zest for the battle with some meaty runs from close into the ruck.

Ventnor lost both Coltham and Teague to knocks in the second half enabling Joel Walton to come on and exemplify Ventnor’s growing squad depth with an all-action display.

Despite the loss, this game evidenced Ventnor’s all-important commitment and team spirit which will soon surely bear fruit.

Ventnor RFC 1XV‘s next fixture is scheduled on Saturday 14 January 2023 away to Romsey RFC in the Counties 3 Hampshire league 2022-23 game.