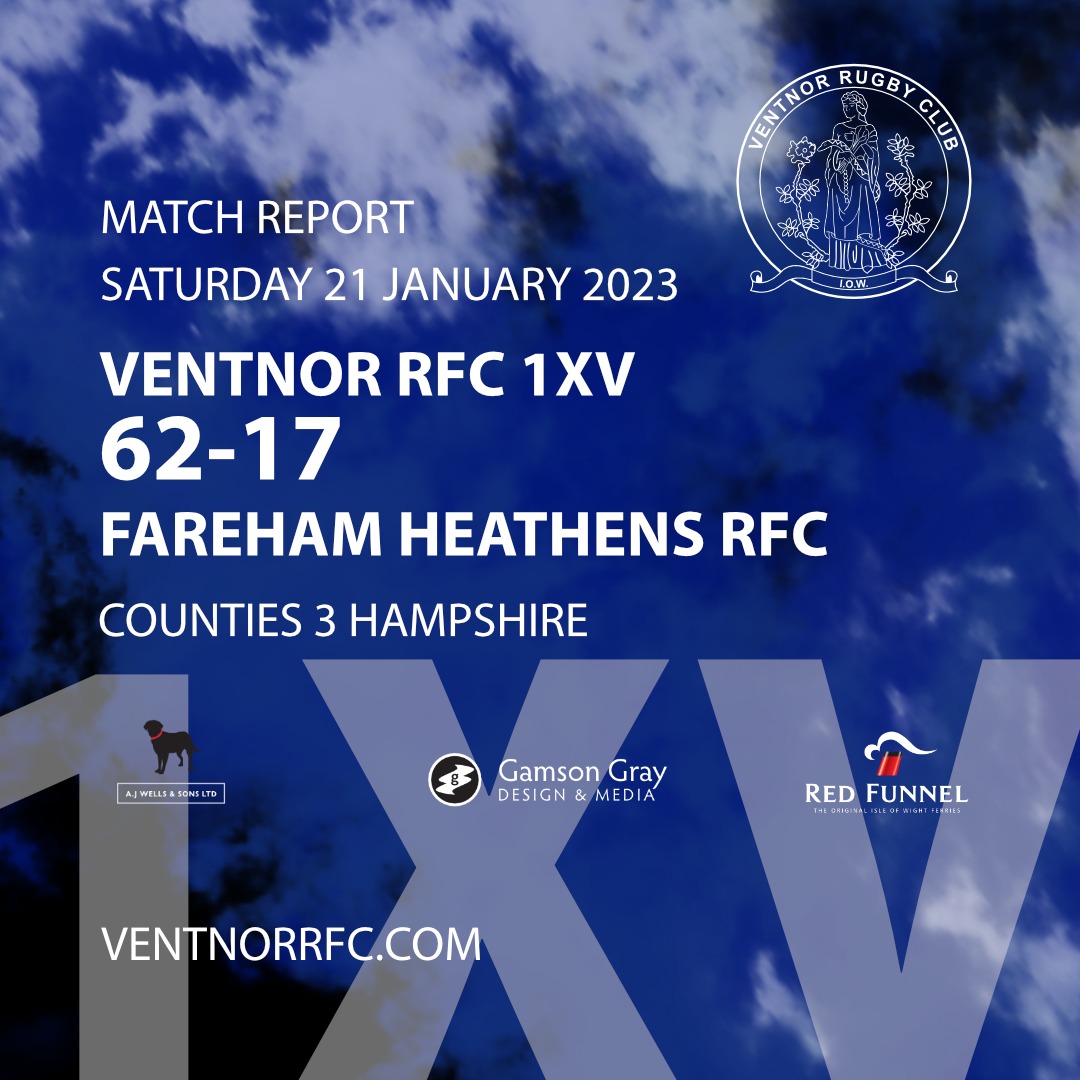 The contrast between this week, and the last, Romsey RFC 1XV 60-3 Ventnor RFC 1XV Match Report Sat 14 January 2023, could not have been more vivid as Ventnor turned on the style and scored ten tries against an always game Fareham Heathens RFC side who contributed hugely to an excellent match watched by a large crowd at Watcombe Bottom.

The standout difference was the control exacted by the halfback pairing of Fergus Kenny and the returning Luke Butler. Kenny kept the defence guessing throughout with his options (as well as putting in a voracious defensive shift around the side of the ruck) while Butler’s choices allowed his backs a chance to show their paces with the ball at last going out wide to Ed Blake, Jake Babington and fullback Tom Crews which dragged the big opposition forwards to places they did not want to go.

From the whistle, Ventnor played at a tempo that was hard to live with and epitomised by skipper Lewis Jones who was everywhere in attack and defence. Babington got the scoreboard rolling with a try out wide after some good interchanges in midfield.

Dan Bell then made a typical break from the back of the scrum, took out the defence and offloaded to Blake to touch down. Kenny converted and after ten minutes Ventnor were 12 points to the good and the confidence was flowing through the whole squad.

Fareham then exerted some pressure of their own and it took a massive defensive effort by the entire Ventnor squad to hold them out in which Ben Savill was harshly yellow-carded for offside.

Despite this, Ventnor were able to break the shackles and move up field. The ball went loose but Lewy Morton created a turnover, Ben Cooper made yards and Kenny put Harry Colson into a hole and the big second-row crashed over for a try which Kenny again converted.

In this move the unfortunate Guy Entwistle was injured and Tristan Price came onto to cover Savill’s absence in the front row. Fareham then failed to clear a missed penalty attempt, Colson and Joe Coghlan turned the ball over and Babington cantered in to claim his second try.

Savill returned and George Finan came on as replacement for the injured Entwistle. Bell made another break, Jones secured the ball which passed through several hands before Blake’s floated pass found Crews who dived over for a try that he converted himself from wide out.

Cooper then went close himself after good work by Finan but just couldn’t keep possession as he was tackled by three defenders in the corner.

This was soon followed by a scrum against the head on the Heathens line in which Savill, Jones and the deceptively powerful George Collett took their front row opposition to the cleaners so that Bell had the simple job of touching down as the Ventnor eight shunted forward. The halftime whistle sounded and Ventnor were 38 points up without Fareham troubling the scoreboard.

The second half was not of the same quality: indeed Fareham scored three tries of their own but there were still some wonderous moments.

Both Savill and Cooper were injured so Price and Jason Coltham came on. Bell made another break, Morton kept the movement going and Jones powered over for a well-deserved try.

Then Andy Teague – once again showing his fitness – followed up another break by Bell and touched down under the posts. Crews converted. Then Crews secured a turnover in midfield, the ball went through the phases with Morton, Crews and Finan prominent and Bell claimed his second try which Crews converted.

And in the final move of the match, Bell claimed his hat-trick after great work up the middle involving Coghlan, Coltham and Morton. Crews converted to bring the final score to 62 – 17.

All in all, a great day for Ventnor with their 2nd XV coming from behind to beat Tottonians RFC 4XV with a final score of 24 – 21, in their Counties 5 Hampshire South West league game.

Meanwhile, Ventnor RFC 2XV are due to play at home to Winchester RFC Knights in the Counties 5 Hampshire South West league game.